It is a cold and wet Friday morning at the Borussia Park, but that’s of little concern to André Schubert as he jogs into the training ground. “Morning!” chimes Schubert to the two cameras that greet his entrance. The tall security guard welcomes him too, giving him a hearty slap on the back before Schubert then hops onto the training pitch.

The players have got used to this; a positive character who bounds into training every day with a smile on his face. But the smile he wears on this particular day might have something to do with his confirmation as Borussia Mönchengladbach’s new head coach around half an hour earlier.

Yet two months before, around two hundred metres from the training ground, there was a very different mood in the office of the club’s sporting director Max Eberl. He says that he’s someone who always has a plan for every situation, but he had no strategy in mid-September when Gladbach’s season hit rock bottom.

On the Saturday, they had been beaten for the fifth time in their opening five league games, a stunning and utterly unwanted new club record that was made only worse by its confirmation at arch-rivals 1. FC Köln. In the press conference following the game, coach Lucien Favre wore a vacant stare. He looked out of ideas. On the Sunday, he resigned.

At the time, the loss of Favre seemed far worse than the results on the pitch. Four months earlier, he’d led Gladbach to their highest finish in 27 years, bringing back Champions League (European Cup) football for the first time in 37 years.

Those successes were the crowning glory of a four-and-a-half-year spell that returned Gladbach to prominence in German football. Faced with a near certain relegation when Favre arrived in 2011, there was some symmetry then that Favre left the club in much the same place he found them; last place in the Bundesliga. Still, his departure was against the club and Eberl’s will.

So on that Monday morning in his office, Eberl asked André Schubert, who had taken over the club’s second team in the summer, whether he would be head coach for the game against Augsburg two days later. At this point, Schubert had never coached in the Bundesliga. He’d taken St Pauli close to top flight promotion in the second tier but there was nothing particularly remarkable about his record.

Schubert said yes to Eberl and two months down the line, no team in Germany is in better form than Borussia Mönchengladbach. Nope, not even Bayern Munich, who can only match the record of seven wins and a draw from André Schubert’s eight league games in charge. They’re back in top four contention and in all competitions, he’s lost only once with his ninth win in thirteen coming against Sevilla in the Champions League on Wednesday night.

Unsurprisingly, Schubert was handed the job on a full time basis over the international break  but back in September, “enough is enough” was the first thing he told the players. So says full back Oscar Wendt as Schubert proceeded to tweak the mindset of the team. No longer were they going into a game, “not to lose”. Now, they had to go into a game to win it. His approach paid dividends quickly. Twenty one minutes into Schubert’s first match, they were 4-0 up against Augsburg. 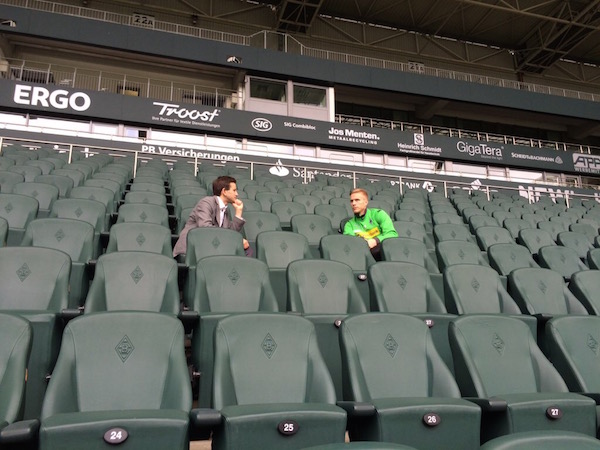 When you talk to André Schubert, he radiates positivity.

“We want to be active in the way that we control the game,” he said. “We want to attack, we want to switch play quickly. We want to offer the spectators real entertainment by playing more attacking, offensive football.”

Sporting director Eberl beams at how Schubert has built upon the carefully constructed playing philosophy of predecessor Lucien Favre. “We attack 30 metres higher than with Lucien. We are closer to the goal, so we make more goals, we have more chances.”

Compare his side with Gladbach under Favre and the biggest change is the development from a team renowned for its clinical counter attacking to one which is able to take the initiative more, but it’s his ability to communicate with the players which has made that possible.

“He really likes to motivate you,” says Oscar Wendt. “He talks to the players a lot. I wouldn’t say a friend but it feels like he has a good relationship with all the players. There’s no doubt about [the fact] that he’s the boss.”

That status as the team’s coach didn’t stop him from making a little bow to Raffael in October as the Brazilian left the pitch after an outstanding display in Berlin. He’s the quiet one in the team, affirms Wendt but by contrast, Schubert has also been able to get the best out of Granit Xhaka who Wendt describes as one of the dressing room’s biggest characters. 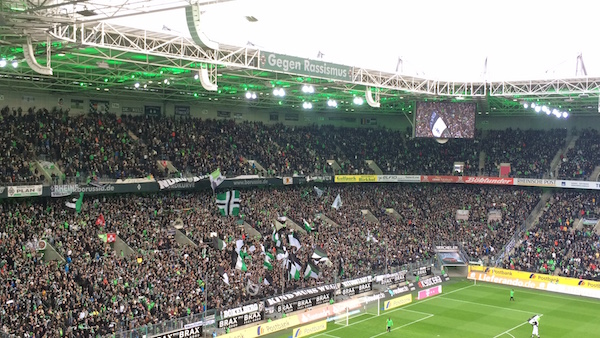 In the absence of injured club captain Martin Stranzl, 23-year-old Xhaka has skippered the side despite the presence of older, more experienced players. The Swiss midfielder loves nothing more than taking responsibility during a game though, with there never being a moment when he doesn’t want the ball. If he doesn’t have it, then he’s looking to take it off the opponent by whatever means necessary. This indiscipline led to him being suspended last weekend but without him, Gladbach still found a way to win.

Winning without key players though has become the norm under André Schubert. Whilst in charge, wingers Patrick Herrmann and André Hahn have both been ruled out long term as has influential centre back Alvaro Dominguez. And yet somehow, they just keep going.

The Italian press were comparing to Schubert to Harry Potter before Gladbach’s game with Juventus. When posing this similarity to him, he smiles, saying that it was only the boys on the pitch who perform magic. Under him though, Gladbach have only spent eleven seconds of his 13 games trailing an opponent in normal time – and that certainly is a kind of magic.