The theme to Rocky blares out, the cheerleaders stand to attention and the crowd erupts.  There he is: Hennes VIII, striding out onto the turf of the RheinEnergieStadion. Well, it’s more of a trot actually. Because Hennes the Eighth is a goat, named after the club’s greatest coach Hennes Weisweiler. To fans of Cologne, nicknamed ‘The Billy Goats,’ he’s the highly treasured club mascot. 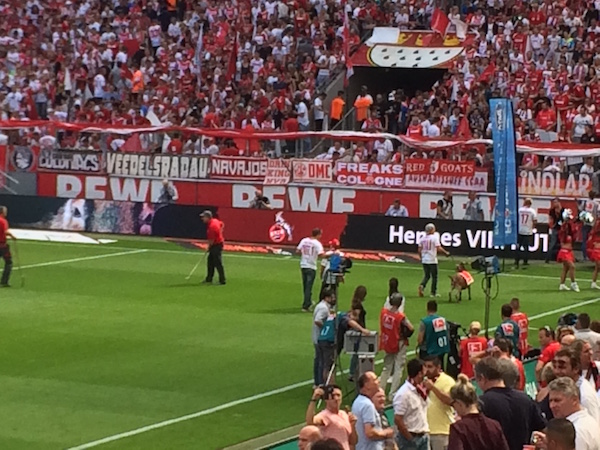 Former England international Tony Woodcock played under Weisweiler here just over 35 years ago and he had told me to expect one of the best atmospheres in Europe. While this was affirmed by the sight of a goat being cheered vigorously by 46,000 people, he was actually speaking about Cologne’s ground and the place it holds in the city’s consciousness.  1. FC Köln, to spell it correctly in German, plays a big part in the thought process of the people here, he says.

If you look on nearly every street corner in the city centre, you’ll see a red box containing copies of EXPRESS. This is Cologne’s local tabloid where each day an 1. FC Köln headline belts out from the front page. After a solid return to the Bundesliga last season, the excitement that maybe, just maybe, Köln could have a good season is palpable. Leafing through EXPRESS’s 12-page season preview, the centrefold screamed “COLONIA CUP CHAMPIONS 2015” after Köln had vanquished Stoke and Valencia in the club’s pre-season cup.

Flicking on the television on Saturday morning, I watched Sky Sport News Germany dicussing the euphoria in Cologne (after one game and one win). The focus on Saturday’s opponents Wolfsburg was all on Kevin De Bruyne, the star man at the centre of Germany’s biggest transfer saga of the summer –was he off to Manchester City for a reported €70 million?

It wasn’t easy to make all of that out in German, but my control of the language is progressing, albeit with a number of slip-ups. This week, I’d responded to a polite enquiry about the nature of my work with a detailed description of what I was planning to have for lunch.

“The most important thing is to pick up the language,” confirms Woodcock and that certainly rings true. His circumstances were, of course, slightly different to mine. He moved to Cologne in 1979, soon after winning the European Cup with Nottingham Forest. I came here from LBC and the Scores show with Ian Payne. He couldn’t go into the centre of Cologne when he arrived unless he wanted 500 people following him.  Thus far, I’ve been okay on that front.

He emphasised how very friendly the people are and I would find out just how friendly that afternoon – only after I’d weaved through the thousands clad in red and white heading in the sunshine towards the city’s second cathedral – the RheinEnergieStadion. Unlike the iconic Dom by the river, this one can house just over 50,000  people but it has a similar majesty. 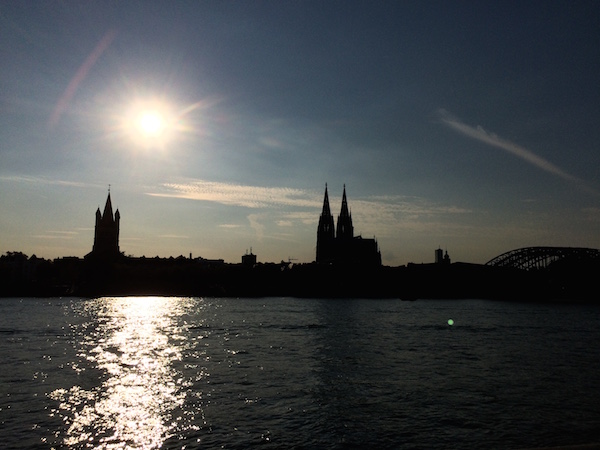 An elderly worshipper sat next to me in the press box. His name is still a mystery, he lacked a red and white shirt, but he was very definitely a Cologne fan. Far from being weathered by five relegations in the past 18 years, his enthusiasm was boundless, as I literally discovered first hand.

Before kick off, after our cloven hoofed friend Hennes had been led out, I commented on the “gute stimmung” (good atmosphere). In hindsight, this was a mistake. I had opened the gateway for interaction and was duly punished over the course of the next 90 minutes for trying to be politely sociable. Every time Cologne went close to goal, my arm received a sharp squeeze from the left while my ears were blasted with loud yelps. You didn’t need to have watched the game to have known that Cologne had played well – you only had to check my arm for bruises.

Wolfsburg looked a shadow of the team which had finished closest to Bayern Munich in May. In particular, the €70 million man De Bruyne was poor, but he did help create the top three loudest cheers of the first half.

At number three was De Bruyne being knocked to the floor by Marcel Risse’s sliding tackle. At number two was De Bruyne skewing a cross so far wide that it went over the protective netting and into the fans for a goal kick. That one indirectly led to the loudest cheer of them all just 30 seconds later.

The goal kick came from Timo Horn, the flick on from Anthony Modeste, the finish from Simon Zoller, lifting the ball over the goalkeeper and heading home. 1-0 to Cologne. My arm gets a break as my new friend decides to raise both of his to the sky.

It was the last time he and the other Cologne fans would celebrate that afternoon but it shouldn’t have been. Zoller’s miss in a second half one-on-one was the pick of several golden opportunities for the hosts. Despite being distinctly off colour, Wolfsburg equalised seven minutes from time. As a rebound trickled towards the back post, there in his fluorescent pink boots was substitute Nicklas Bendtner to prod home. The irony then was that the visitors, having been outplayed on the counter for the majority of the afternoon, should have then won on the counter in injury time.

Of course, it was De Bruyne who was at fault,  galloping through on goal alone in one of those moments where everything seems to happen in slow motion. One on one, his first attempt to beat Timo Horn was thwarted, and his second attempt to beat the defenders on the line with the rebound was blocked. This brought the loudest, most schadenfreudistic (ED’S NOTE: I’m not convinced that this is a real word, Archie) roar of the afternoon. It finished 1-1. Relief for the Cologne fans at having saved a point. Relief for my left arm as my new friend scurried away.

Downstairs in the mixed zone, Wolfsburg sporting director Klaus Allofs spoke to me about their big talent, their great player, their special player – Nicklas Bendtner. He was still pretty sure that Kevin De Bruyne would play on Friday against Schalke but he admitted the current situation was disturbing the player. He wasn’t the only one who was disturbed. Say what you like about the English press pack, but nobody ever tried to squeeze me at Stamford Bridge.