Last Thursday, I was back in England and I went to see my Grandma. She is, we shall say, of a certain vintage, so much so that she’s surprised I’m getting on so well with the Germans. Happily surprised though, I should say.  She was keen to know where I’d be on Saturday afternoon. So I explained that I was off to one of the biggest derbies in Germany as Cologne played Borussia Mönchengladbach. She was impressed, even more so when I told her, as all good grandsons do, that I was going to have a quiet night in on the Friday in preparation for the big match.

Grandma hasn’t met my flatmates though. Upon returning to Cologne, they were very persuasive. So off we went into town and a few hours down the line, I found myself performing Robbie Williams’ Angels at Jamesons, an Irish pub in Cologne city centre, watched by seven English blokes on a stag do and yet in spite of this atrocity, the atmosphere in the pub was still better than the one at the derby the following day.

The newspaper I bought on my way home from the pub in the early hours begged to differ. “It is our time once again!” hollered the front page of Express, the biggest local newspaper. What awaited me in the Rhein Energie Stadion didn’t match their pre-game hype. It was eerily quiet despite a crowd of nearly 50,000. But this all comes back to some men in white boiler suits.

You see, back in February, around 30 Cologne ultras, distinctively dressed in Droog-like fashion, stormed the pitch at full time after they’d lost at Gladbach. Now the authorities had reduced the away allocation and in turn, wanted each away fan’s name, date of birth and address on their ticket. As I’ve discovered since moving to Germany though, fans here are not afraid to stand up to authorities and say what they think is right and wrong. 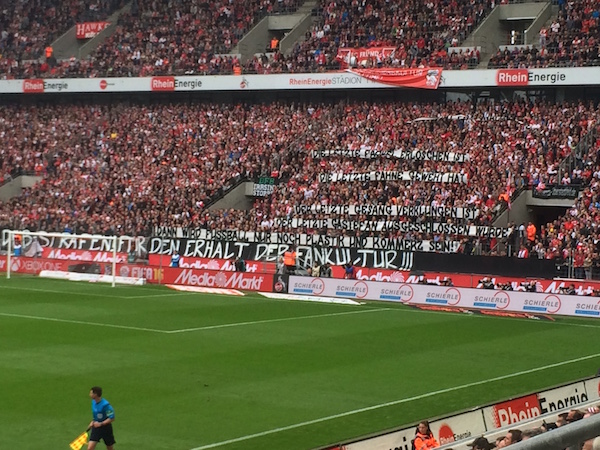 In this case, the response from the Gladbach fans was “nuh uh”. Instead, they organised a boycott. What’s more, 400 of them turned up to training on Thursday to explain to the players why they weren’t going and on the day of the game, 1700 fans marched through Mönchengladbach to protest about the threat to fan culture posed by the DFB (the German football association). 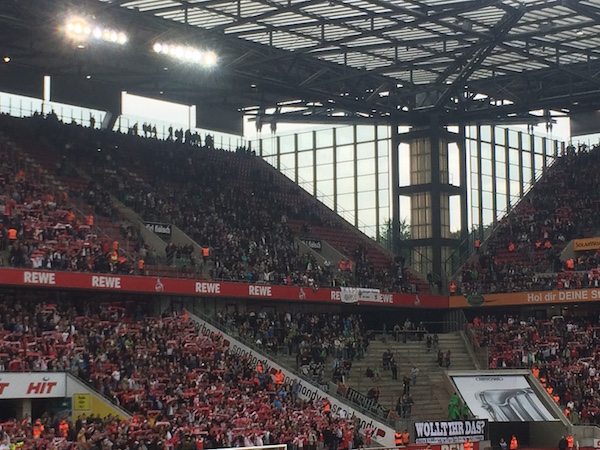 A smattering of away fans still stood and sat in the away end in Cologne, but it was for the most part empty on Saturday. In an act of solidarity to the fans of their great rivals, the Cologne fans decided there would be no organized support against Gladbach, meaning no big flags or pretty choreographies. The most noticeable thing though was the lack of sound compared to their last home game against Hamburg.

As noble as it was of the Cologne fans, the whole solidarity thing seemed a bit odd given that the people who had caused this were indeed Cologne fans. Still, while they weren’t prepared to sing, they were ready with their banners – lots and lots of banners.

Artistic creativity is not lacking in the German football fan scene. Banner making and unveiling is very much in vogue. At almost every game I’ve been to this season, you could have counted at least five banners per game, usually demonising the DFB. This Saturday was no different – it’s just the volume of the banners increased. The biggest one was in front of the Cologne ultras’ traditional spot in the Südtribüne, stretching the same distance as the width of the penalty area with a clear message: “Against DFB punishments! For the preservation of fan culture!” 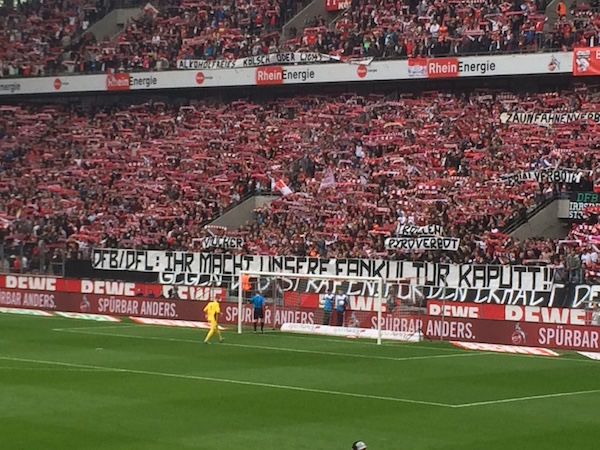 It felt like as much of a requirement to watch the stands as to watch the derby itself. Such is the vibrancy of the fans around the Bundesliga, that’s usually the case too. This week, though I found myself watching more of the fans because the game was dire.

The complete lack of an atmosphere contributed to that. The players seemed uncomfortable with these unusual surroundings as 50,000 watched them in silence. The mood was epitomised by the man behind me who loudly yawned half an hour into the game.

The home side looked nervous, but then again Cologne hadn’t beaten Gladbach in nearly seven years. You had to go back ten years for their last home win against their arch-rivals. Now they had the chance to grind Gladbach even further into the dirt. The visitors had lost all four of their games so far this season – a big shock given that they finished third in the Bundesliga in May. 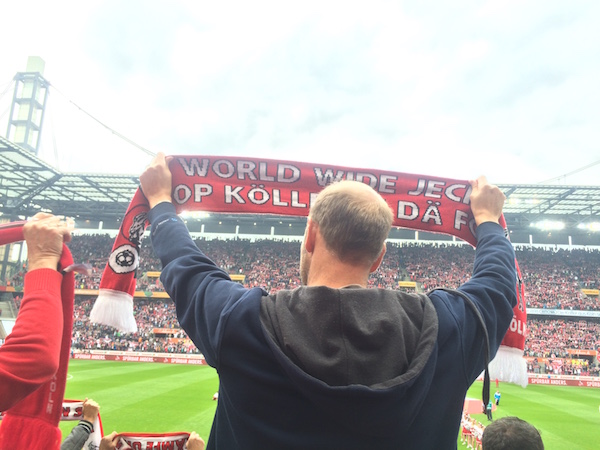 In a slightly better second half, Anthony Modeste raised the stadium from its slumber. The Cologne forward nodded in a cross from Leonardo Bittencourt just after the hour mark. It produced a spine-tingling roar from the home fans, which spoke as much for their relief as it did joy. Being quiet isn’t something that comes naturally to people from Cologne. For the next 25 minutes, the home fans desperately tried not to sing. But they just couldn’t help but emit a few taunts towards the few Gladbach fans in their presence. Full time brought another roar as Cologne secured a long awaited derby victory.

The players did a lap of honour but didn’t approach their fans in the Südtribüne as you’d expect. There were a few whistles from the stands but the fans quickly toddled off – they had the derby win they wanted.

Gladbach though were still pointless after five games. The next day brought the shock of the Bundesliga season so far followed as coach Lucien Favre resigned. But football is full of surprises as Gladbach fans have found out this week. On Wednesday, in their first game since Favre’s departure, they scored four goals in 16 minutes to defeat Augsburg 4-2…