You might have heard of Hürth. You might know it as Michael Schumacher’s birth place. But you probably won’t have heard of fifth tier FC Hürth. They attract few fans and reside in a small, one-stand stadium on the very edge of Köln (Cologne). But last weekend, they were up against a team from up the road, third flight Fortuna Köln in the last 16 of regional cup competition, the Mittelrhein Pokal.

I got a lift to this grey, sleepy suburb with Axel, a Fortuna fan of over 40 years. The club from the south side of town are much larger than FC Hürth, but still very much behind 1. FC Köln in the city’s football hierarchy. And it’s not much of a contest. Fortuna have pulled in crowds of around 2,000 per game this season while their larger neighbours get just under 50,000 at the Rhein Energie Stadion.

That arena hosted their most high profile meeting in the DFB-Pokal Final AKA the German cup final. That was back on the 11th June 1983, a particularly notable edition with it being the only time that two sides from the same city have met in the final.

The day was significant for more than just the cup final for Axel. He was 18 at the time and that morning, his dad died after a short battle with cancer. Axel wasn’t going to attend the game but his mum insisted that he went. After all, it would be better than him staying at home all day.

So with his mates, he went to the cup final and was the behind the goal where Pierre Littbarski condemned second division underdogs Fortuna to a 1-0 defeat. Thirty two years on, he still points out how different it could have been. To be fair, the highlights back him up with Fortuna most notably fumbling a chance from six yards and also hitting the bar.

These days though, they have found it difficult to even get into the DFB-Pokal, taking part in only one of the last 15 editions such is the way it works for lower ranked teams in Germany. In Fortuna’s case, if they finish below the top four in the third division, then they have to win their regional cup in the previous season to make it to the first round of the next campaign. Do that and €140,000 awaits you, plus a lucky draw that could pair you with a Bundesliga giant of Bayern Munich and Borussia Dortmund.

Normally around 150 turn up at Hürth, but Fortuna’s presence increased that to a capacity crowd of 800. That made things rather cosy in a ground contained by tall metal fencing with that one stand, opposite the dugouts.

It was at the far end of the stand that the Fortuna fans had marked their territory. Axel is such a familiar face that it became odd when someone didn’t greet him as he walked past. It’s this family element to the club which makes it special for him. Like most in Germany, it’s fan owned but for the majority of Axel’s time following Fortuna, self-made local millionaire Jean Löring ran affairs.  To the fans though, he was “Schäng,” a local translation for Jean. 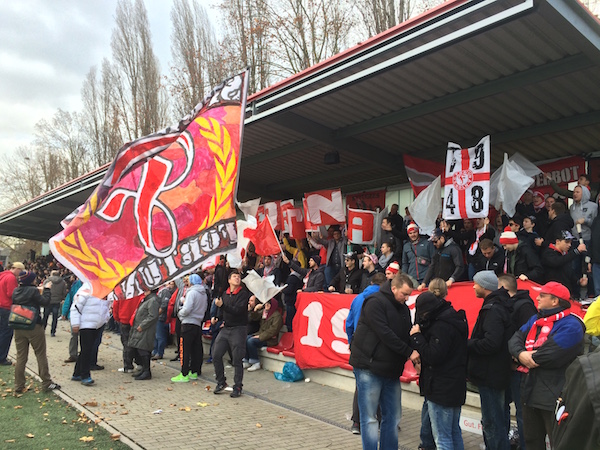 Eccentric doesn’t cover a man who in 1999 sacked coach Toni Schumacher at half time with the team 2-0 down. Then there was the time when after a power cut and subsequent floodlight failure in the stadium, Schäng went and fixed it himself. Fortuna were winning before the lights went out which might have had something to do with his quick fix. He was unconventional, but Schäng loved Fortuna.

He passed away ten years ago but his legendary status can still be noted today by the fan club named “Schäng Gang”; its members spottable on Sunday by hats with those words adorned on them. They formed part of the most vibrant corner of the stadium where the Fortuna hardcore held up their banners and waved their flags whilst rhythmically thundering out song after song.

Coach Uwe Koschinat came over before the game, partly to applaud them but more pressingly, to wave to his wife. When he climbed up into the stand to see her after the match, it was with a broad smile. Fortuna had won 3-0 but the greater experience was watching the fans. Take the imposing figure of Klaus, a lawyer in his forties.

He wore a tracksuit top, the zip straining unsuccessfully against his bulk, a vast thatch of chest hair on show. Handfuls of gel slicked his hair back tight on his head. When it so pleased him, he marched in front of the Fortuna hardcore, bellowing something utterly incomprehensible. The Fortuna fans knew the drill though and after each shout from Klaus, they yelled “Tzatziki”. I turned to Axel for an explanation, but all I got was a shrug.

While pondering this at half time, a younger looking Fortuna fan in his twenties was getting very excited. Distinguishable by his hat with a pro-refugee slogan, he munched through a piece of cake he’d bought at the Hürth club house. It was “Unglaublich!” (Unbelievable) so he told his mate midway through a mouthful. Intrigued, I went to investigate and found a grand selection of homemade goods. 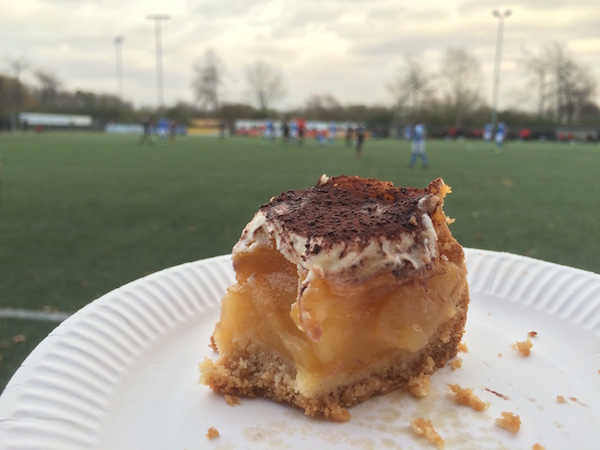 Something in between a tiramisu and an apple tart was purchased and I turned back around to see a red cloud of smoke. From where I’d been standing two minutes before, Fortuna’s Ultras had let off a flare and it was amusing them no end by the time I’d stepped back through for the start of the second half.

The PA announcer marched round in front of them, turned on his mic and pleaded for them not to do it again. They sung back at him that pyrotechnics weren’t a crime. Some of the Fortuna elders looked irked by the actions of the younger counterparts.

They would not spring into action until the same perpetrators invaded a small area of the pitch. I say invaded. There was no barrier between pitch and stand. More “they stepped forward five metres” when a brawl threatened midway through the second half after a confrontation between the Hürth goalkeeper and some of the Fortuna players. Our cake eating friend from earlier was one such fan to step out of line. Having returned to his place two metres behind the touchline, one of the Fortuna elders put him straight. His beer was flung out of his hand and he was firmly told that these shenanigans could see Fortuna thrown out of the competition.

As it is, they’re through to the quarter finals of the Mittelrhein Pokal, just three games away from the first round of next year’s DFB-Pokal. As Sunday’s day out with Axel showed though, when it comes to Fortuna Köln, it’s about much more than just the football.