The Germans have a wonderfully odd way of describing those whose grasp on sanity may have relaxed a little. They are said to have, “no more cups in the cupboard,” which seems entirely illogical until you pause to reflect upon the phrase, “one sandwich short of a picnic.” We’re not so different really.

Still, whether it’s cups or sandwiches, it’s clear that Jan, a Dutch writer I met in Mönchengladbach this week, certainly lacks something. His dedication to his team, the free falling Borussia Mönchengladbach is extraordinary. Living in Tilburg in the Netherlands around 80 miles away, Jan has only missed seven games, home and away, in the last 25 years. What’s more, Jan’s dad, 84, holds the impressive title of being the oldest season ticket holder on Gladbach’s boisterous Nordkurve – the second biggest standing terrace in European club football.

Jan and his dad have been regulars at Gladbach since the seventies – the golden age for the club when they won five Bundesliga titles and two UEFA Cups. For the first time since that decade, they’re back in the main stage of the European Cup this season, now known, of course, as the Champions League. 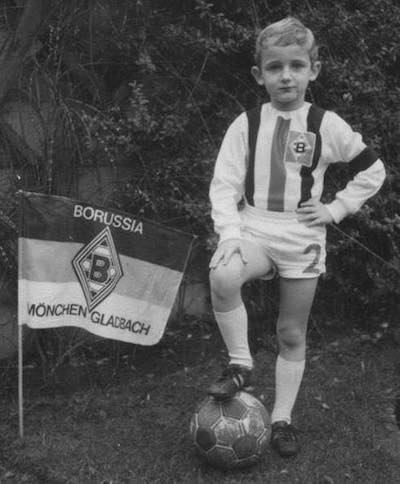 Jan and I get on famously, except for a mild disagreement over the city of Cologne. This is the city in which I live, a city I have very much fallen for. It is a city that Jan will only describe with a very rude word. Mönchengladbach does not have the bright lights of Cologne, but history will tell you that it has a more successful football team. Jan explains the rivalry in seven words: “They hate us and we hate them.”

Gladbach finished third last season but they are currently bottom of the Bundesliga after a mixture of injuries and the exit of key players. Never in Jan’s lifetime have Gladbach made such a bad start to a Bundesliga season. I’ve come to see whether they can end that run against Hamburg – a game which was Jan’s first a mere 41 years ago. He isn’t confident. The best he can predict is a 1-1 draw. I think his team will win 3-2. Neither of us are even close. 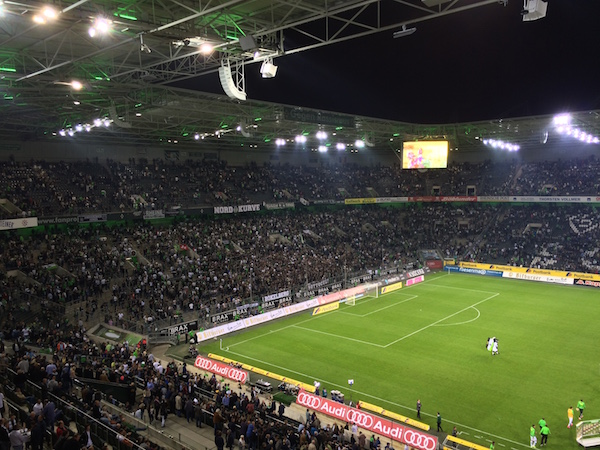 Gladbach fans shouted “Fussballgott” (football god) when their defender Tony Jantschke’s name was announced before kick-off. He certainly came up with a heroic performance to justify that status – heroic, that is, if you’re a Hamburg fan.

His shoddy back pass was sniffed out by Pierre-Michel Lasogga who gave the visitors the lead early on. Jantschke then failed to mark Lasogga for Hamburg’s second just before half time. In the second half, a simple long ball over the top by Hamburg goalkeeper Jaroslav Drobny created the away side’s third for Nicolai Müller. Come full-time, Hamburg had actually looked competent, while Gladbach had barely created a chance and remained rooted to the bottom of the Bundesliga – it just didn’t make sense. Jan was nowhere to be seen after the game but the next day, he messaged saying he thinks I’m bad luck.

Having made it back to Cologne at around 1am, it turned out that I’d managed to replicate the clumsy performance of the Gladbach defence. I’d lost my new German bank card in Mönchengladbach that evening, with its big red and white Cologne badge on the front. Fearing that a Gladbach fan would have already gone on some sort of revenge spending mission, I then spent the early hours of Saturday cancelling my bank card in excellent broken German.

A few hours later and I was on another train, this time heading a mere 186 miles up the road towards Hannover to get a glimpse of the Bundesliga’s other Borussia team and the current league leaders – Dortmund.

Outside Hannover’s main train station, I met Ansgar, a student but more importantly, a Hannover fan who had travelled over from Berlin to watch the game. He stuck a beer into my hand within two minutes. I like Ansgar. His t-shirt though might make you think he’s a bit odd.

Hannover’s coach Michael Frontzeck is renowned as a relegation expert – and by expert, I mean that he usually leaves teams in the relegation places. By some minor miracle, he kept Hannover up last season. Ansgar likes Frontzeck’s style and herein lies the origin of the “Frontswag” t-shirt. 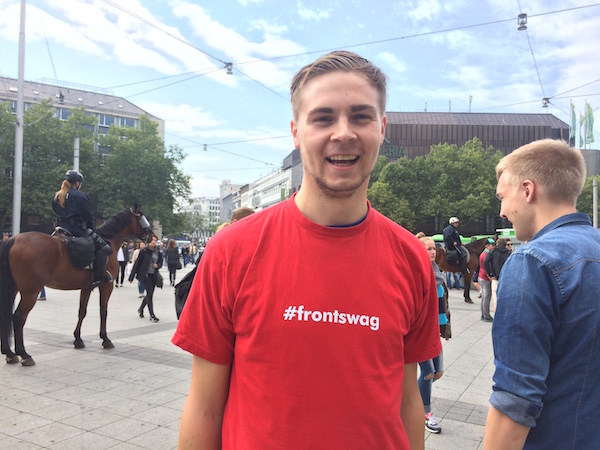 Indeed. His friend Julia thinks they will go down this season. Ansgar doesn’t by the virtue of there being a few worse sides than them. They were certainly expected to go down against Dortmund on Saturday and outside their own train station, Ansgar and Julia were outnumbered by the swelling number of Dortmund fans.

Their support is renowned for being excellent but like most clubs, they have their own share of idiots – one of whom drunkenly knocked into Julia’s back. Understandably, Julia thought that wasn’t quite right but this guy still decided to shout at her. Given Dortmund’s motto, he needed to perhaps show a bit more “echte liebe” (true love).

Still, with doomful predictions of Hannover’s predicament ringing in my ears, I headed off to the stadium. On the way, I saw an older woman break up a potential scrap between two spotty teenagers who, bless them, had come dressed like budget hooligans.

It’s much nicer to say that both the Hannover and Dortmund fans were in great voice on Saturday. The sheer size of the sea of yellow that had come from the Ruhrgebiet was stunning. It may have been a Hannover home game but you’d say nearly half of the stadium was taken up by Dortmund fans. 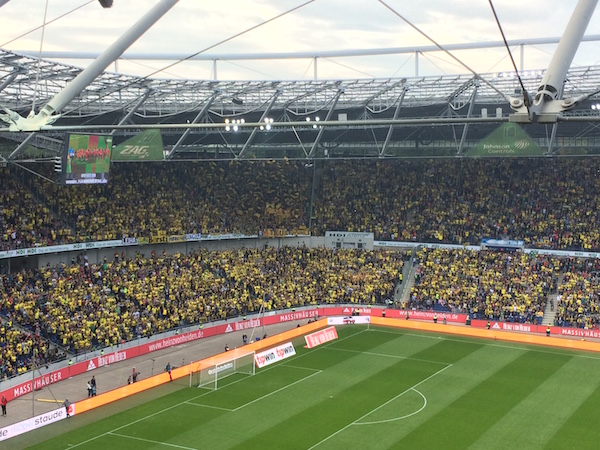 Those clad in yellow would leave the happier as Dortmund won 4-2 to stay top of the league. The standout mention goes to Hannover’s Felipe who gave away two penalties and scored an own goal to give credence to Julia’s belief that Hannover may not be in the division this time next season.

After the game, I even had a quick word with Dortmund coach Thomas Tuchel. In English far better than my German, he told of how very satisfied he was with the performance. You very much know he’s a 21st century coach when within 30 seconds of his first answer, he talked of how pleased he was the amount of intensive runs and sprints that his team had made, not to mention the 71% possession his team has had. And no wonder he was smiling. He’s won all nine of his competitive games so far – a new club record for Borussia Dortmund.