The big, bald waiter looks me up and down before raising his eyebrow suspiciously. “Englisch?” he asks. I smile awkwardly and nod.

“Where do you come from?” he asks in German.

“Yes,” I reply in German. There is a pause and then he swaps the German menu for one with a shiny Union Jack on the front and walks away chuckling. I may not be quite as ready for this as I’d hoped.

For the next year, I’ll be living in Cologne. I have a room in a flat for the next six months with two German guys, Fabian (Bayern Munich fan) and Chris (Schalke fan). I have a press pass. I have a German-English phrasebook. And I have a mission. To immerse myself in the country, the culture and the football. And to tell you all about it. Chris and Fabian, I think, will come in very handy for this. They have just finished studying at the university here. So naturally, they drink a bit, smoke a lot and watch a lot of German football.

They’re very nice. They got to work on my first day, teaching me to swear effectively in German before we went to their favourite bar in Ehrenfeld. 82three has a charming dinginess to it and was perfect to take in Wolfsburg against Bayern Munich in the German Supercup along with their friend Julian (Werder Bremen fan).

Chris immediately ripped into Julian. Not only had his Schalke team nabbed Franco Di Santo from Werder Bremen days before, but Chris had beaten Julian to the signing of Wolfsburg’s Daniel Caligiuri in Comunio, a German version of fantasy football. But the surprise hero in the Supercup was Caligiuri’s team-mate, Nicklas Bendtner. Bayern coach Pep Guardiola looked annoyed but Bayern fan Fabian wasn’t too bothered. He felt that the first round of the DFB-Pokal (AKA the German Cup) on the following weekend was more important where Bayern had a trip to fifth tier FC Nöttingen. I, on the other hand, was off to MSV Duisburg. 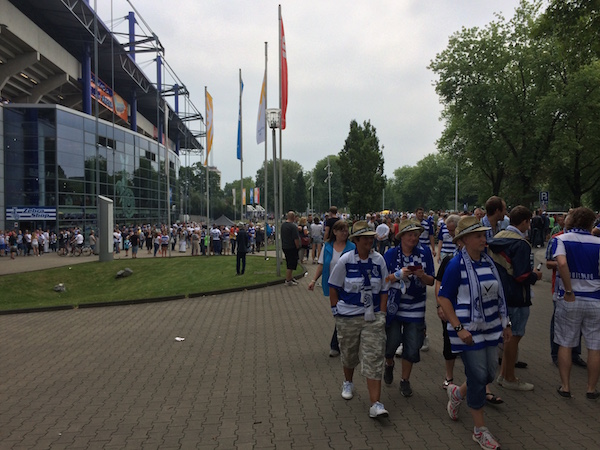 The DFB-Pokal first round may be Germany’s equivalent of the FA Cup third round but here, every Bundesliga side has to play away at team in a lower division away from home. Schalke, one of the biggest clubs in the country with over 130,000 members, drew MSV in a Ruhr derby. The Ruhr is mainly renowned for its industrial roots and its intense passion for all things football. Duisburg is 20 odd miles to the west of Schalke’s home in Gelsenkirchen. And they absolutely hate Schalke.

Their 5-0 defeat to them in the 2011 DFB-Pokal final didn’t help, but bizarrely, what’s perhaps as painful for their fans is that Schalke actually helped Duisburg out two years later. Financial problems saw the club denied a licence for the second division and forcibly demoted to the third tier. Schalke though, along with Borussia Dortmund and Bayern Munich, chipped in with the cash to help keep Duisburg afloat. 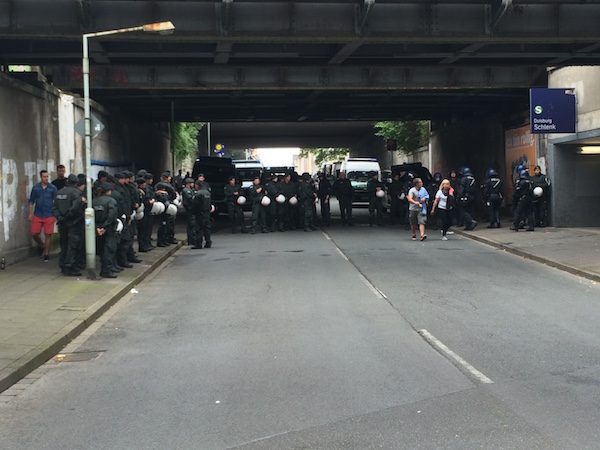 The police expected MSV’s dislike to develop into something more sinister, judging by their helmets, weaponry and generally large presence at Duisburg’s main train station. Naturally, with my loose grasp on the German language, I accidentally boarded the train bringing the buoyant and beered-up Schalke fans to the stadium, a move which saw more new German words learned, mainly words to articulate their thoughts on arch-rivals Borussia Dortmund. And they would be in a similar mood on the return journey a few hours later.

This was Duisburg’s first competitive game against Schalke since that showpiece event in 2011. In May, they were promoted back to the second division. Perhaps then they could give them a better game this time around. Perhaps not. It turned out exactly the same way. Schalke gubbed them 5-0.

The German second division season is young, but Saturday showed why Duisburg are bottom of the league after two games. But while the team are bad, the fans are superb. Four nil down after 65 minutes, they started bellowing out “Meidericher ESS VAU” (MSV, in other words) and did not stop until ten minutes after the full time whistle. By then, Duisburg’s players had sheepishly walked round twice to thank them for their support.

A minority of Duisburg fans overshadowed that though. Some on the Nordtribüne unveiled a banner during the game which taunted a former Schalke director for suffering with Alzheimer’s. Around forty others snuck around to the Schalke fans before the end of the first half, hankering for a scrap before the police blocked them off. And after the match, back at Duisburg train station, I saw a Schalke fan mugged for his scarf as he was put in a headlock and punched repeatedly.

If that poor guy was looking for some positives on Saturday night, hopefully, he would have thought back to earlier in the afternoon and perhaps the season ahead. His team looked much more aggressive under new coach André Breitenreiter, with summer signing Johannes Geis a standout performer on his debut. Not much consolation when you’ve just been duffed up though.

The Bundesliga gets under way this week and Schalke certainly look in a much better place than fellow giants Hamburg. They were the biggest team to be dumped out of the cup over the weekend, losing in embarrassing fashion to fourth division Carl Zeiss Jena. Next up, in the season opener on Friday, it’s champions Bayern Munich. So that should go well.

Flatmate Fabian thinks Bayern will win 11-1. Flatmate Chris thinks it will take Bayern three minutes to score. Given that Hamburg have conceded 31 in their last five league games at Bayern, they might not be far off…