It’s half time at Borussia Park. Up against the unbeaten champions, Bayern Munich, Mönchengladbach are fortunate to still be in the game. Somehow it’s still 0-0. Manager André Schubert looks around the dressing room at his players. Does he throw teacups? Does he unleash the hairdryer? No. He asks them what they want to do. Do they continue with the 3-4-3 formation that they’d only had time to practise sparingly that week? Do they revert to something safer and more conventional?  They chose to continue. And boy, did the gamble pay off. 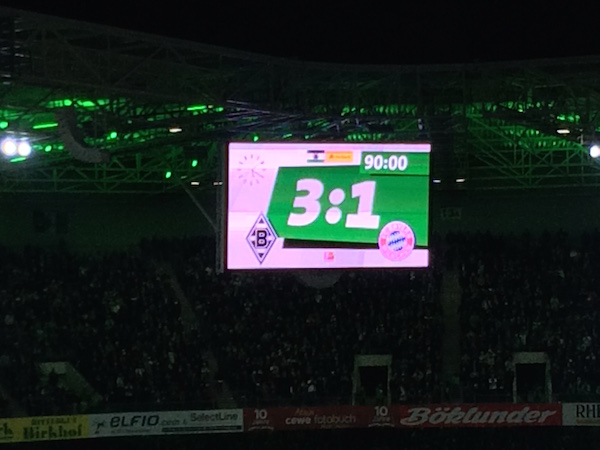 “We’re trying to work together, not against each other,” said midfielder Fabian Johnson, sweaty but satisfied in the tunnel after his side’s stunning 3-1 victory. “We’re always telling him [Schubert] if we play a system and it doesn’t work for us. We just talked a little bit and I think we knew that we were going to get our chances.”

Twenty-three minutes after leaving the dressing room, Johnson was tearing across the turf towards Bayern goalkeeper Manuel Neuer. The gigantic scoreboard above Johnson said 2-0 to Gladbach. But not for long.

“Today, it’s Christmas already?” laughed stadium announcer Torsten Knippertz and 50,000 Borussia Mönchengladbach fans laughed with him. They were 3-0 up against unbeaten champions Bayern Munich. And it meant everything to those supporters.

Andreas was one of them. He’d told me outside the stadium that this was German football’s true “Klassiker” (Classic). That’s a tag you might have heard attached to Bayern’s encounters with Borussia Dortmund recently. Andreas would not agree, citing Gladbach’s rivalry with Bayern and how it captured Germany’s imagination in the 70s.

There is a nationwide dislike of Bayern Munich that is nothing new to their fans. Each one I spoke to before the game described it as “neid” (envy). They’ve heard all it before.

Usually they win and people hate them because they win. Win controversially and it’s described as “Bayern Dusel” (Bayern luck), a special kind of fortune reserved especially for the record champions. But guess what? Their fans won’t care because they’ve won. On Saturday, Pep Guardiola’s side didn’t win. But they should have.

As the December darkness drew in after fifteen minutes, the Borussia Park floodlights were flicked on – and Bayern sprang into life. Like a deadly predator, they circled their prey, carefully eyeing up their opponents’ every move before pouncing. In the space of ten minutes of immense pressure, the Gladbach goal was seriously threatened on six separate occasions. Yet while others like Dortmund, Wolfsburg and Arsenal have crumbled this season, Gladbach survived. Just.

The last of these six attacks ended with Kingsley Coman slamming the ball against the Gladbach post. Ten metres behind the charmed goal of Yann Sommer, 15,000 home fans in the Nordkurve cheered defiantly. Surviving that sort of moment can give an underdog an air of invincibility, and so it proved on Saturday. Because by the time Franck Ribéry finally found a way through for Bayern, it was too late. The game was lost.

The home side’s first goal triggered a bombardment of plastic beer cups from the swaying Nordkurve against the protective netting in front of them. All around, fans shut their eyes, clenched their firsts and screamed. Eleven minutes later, those same hands were clasped in front of their mouths in disbelief. Right back Julian Korb was one-on-one with Neuer – and his effort was tantalisingly deflected onto the bar. Teammates Mo Dahoud and Lars Stindl sank to their knees as the Gladbach fans gasped. Miss that chance against Bayern on a normal day and you’ll usually be punished as both the fans and the players knew too well.

Saturday wasn’t normal though because two minutes later, Gladbach’s Lars Stindl lifted the ball over Neuer. The home side were two nil up, sparking more frenzied scenes inside the Borussia Park. As Gladbach announcer Torsten Knippertz bade the crowd to call out the scoreline, eyes in the press box widened. Bayern were actually going to lose in the Bundesliga for the first time this season. In Pep Guardiola’s previous two seasons at Bayern, they hadn’t lost a league game before Christmas. 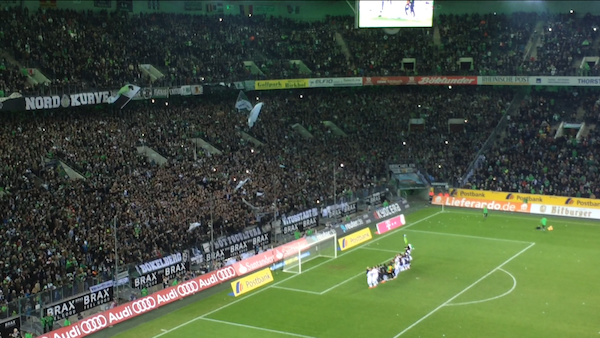 In Germany, they call the first half of the campaign the “Hinrunde”. That it had been four years since Bayern last lost an away game in the Hinrunde made this result even more startling. Of course, that must be tempered. Since stepping up from being Gladbach’s second team coach in September, André Schubert has been unbeaten in the Bundesliga. He’s lifted the club off the bottom and back into the top four. Facing Pep Guardiola was meant to be his toughest test as they were the only two unbeaten coaches left in the division.

That total would be halved, but not the way anyone expected. Two minutes after Gladbach’s second goal, with the home fans merrily singing about taking Bayern’s lederhosen off, Julian Korb chipped the ball through to Fabian Johnson. “I was trying to not think as much as possible,” says the American midfielder, “because if you have a lot of time, it’s always getting complicated.”

As for the ensuing celebration? “I can’t remember,” he laughs. “I was just happy.” And so he was. So much so that he ran over to the side of the pitch and kicked the corner flag out of the ground. Bayern know exactly how that flag feels.