“Is it usually like this round here?” asked Pete. My fellow Englishman had just been pelted with eggs by some local residents in my home district of Ehrenfeld, leaving a sticky residue on the back of his jeans. You see, Pete, the lead singer of Manchester band ‘Shoshin,’ had been playing a gig along with the rest of his band under a tree opposite Ehrenfeld train station.

The Intersphere, a band in their genre of what he described as, ‘modern rock,’ were playing at a club under the station earlier that evening. So he and his band parked up outside, waited until the gig was over and started their own concert when people emerged shortly before midnight.

Around 30 people were drawn in by this craftiness by the time I’d arrived off the station’s platform, moments after the egg slinging and moments before the whole affair was brought to an end by the police. The crowd booed, but after a half hour set, Pete was still happy with having got 20 more minutes than usual of exposure. More out of admiration for his innovative approach than for a new found love of ‘modern rock,’ I bought a €5 CD off him before assuring him that, yes, the locals were usually much friendlier. 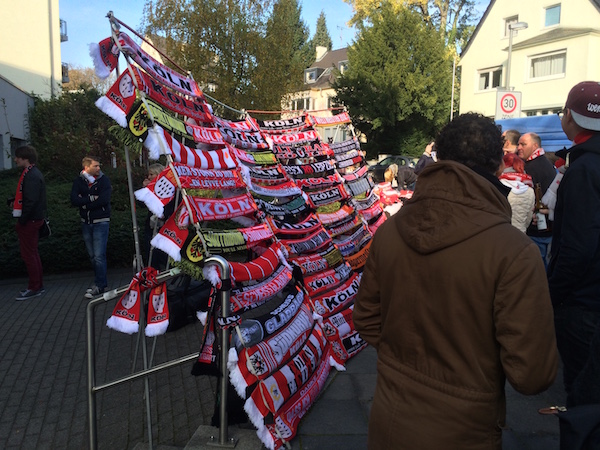 However, those locals didn’t seem so friendly on Saturday outside Cologne’s Rhein Energie Stadion when I showed them something that one man described as a “Katastrophe” (disaster), what one lady said was “ganz schrecklich” (really terrible”) and another simply labelled as “Scheisse” (take a wild guess).

The offending item was a picture of Cologne’s new kit, brought out to celebrate Karneval – something which is a very big deal in the city. Starting every year on November 11 at eleven minutes past eleven, it’s basically a very good excuse for the people of Cologne to get dressed up, sing a few songs and drink a lot of beer. 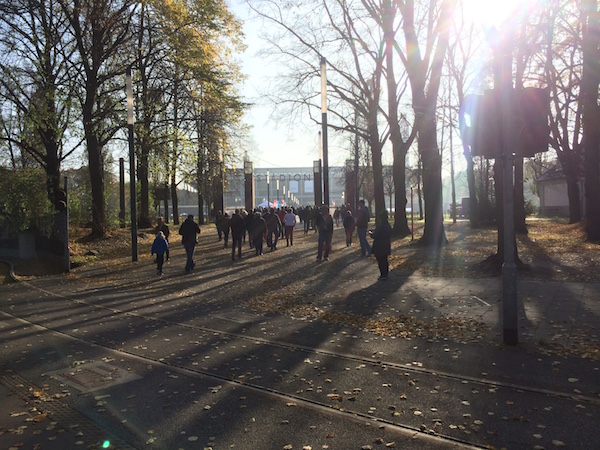 I’ve been assured the best bit of Karneval comes in February but you still notice how whenever mentioning it to locals, eyes widen with anticipation. Halloween isn’t even in the same league here. A resounding 91% rejected the notion of this “Irish-American festival” even being regarded as a second Karneval in a poll last week in local tabloid Express.

Halloween fell on the same day as Cologne’s latest home game where there was an even higher disapproval rating for referee Günter Perl come full time. He was harangued by the home fans and the Cologne hierarchy as he failed to award what were “two clear penalties” according to Cologne’s sporting director Jörg Schmadtke.

The annoyance at this 0-0 draw with lowly Hoffenheim was all the greater given that they felt wronged in their last home game against Hannover too. Then, they’d lost 1-0 to a goal which was “Diego Maradona’d” in by Leon Andreasen. 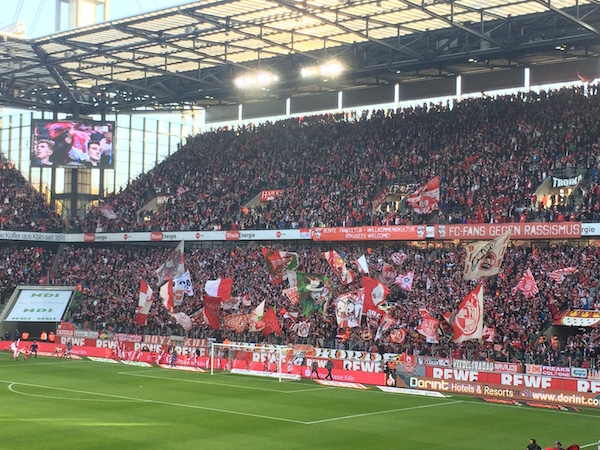 Refereeing decisions aside though, the recent trend of Cologne being wasteful in front of goal continued on Saturday as the team went past the six hour mark without scoring. With no win in four, the way striker Anthony Modeste exasperatedly lifted his shirt over his head summed up the mood. That particular incident came after Modeste had missed the target with one of seven attempts he had on Saturday.

You wouldn’t have known he’d scored nine goals in thirteen games this season but goalkeeper Timo Horn was firmly in his corner when I spoke to him after. “Tony is a very good striker. He scored a lot of goals at the beginning of the season and he will also go on, like the team. We will score in the next few weeks and Tony will also score some important goals for us.”

Horn himself had a better game than his team-mate Modeste, making what he described as an important save from the visitors Eduardo Vargas in the first half. That stop denied Hoffenheim a win in their first game under new coach Huub Stevens, a 61-year-old Bundesliga stalwart.

German coach Markus Gisdol was sacked with Hoffenheim second from bottom five days before the trip to Cologne. So for the third season running, Stevens took over at a club looking to avoid relegation from the Bundesliga – a goal he has achieved in the past two campaigns with Stuttgart.

Yet the bigger talking point was Hoffenheim’s move to announce Stevens’ successor next summer. Providing they do stay up, 28-year old Julian Nagelsmann will become the youngest ever coach in the Bundesliga as he steps up from coaching the club’s under 19 side.

He has been involved with the first team at Hoffenheim before, working with current first team members like Eugen Polanski. Now Nagelsmann wasn’t even born when his eventual predecessor Stevens started his coaching career. Midfielder Polanski though, who is older than Nagelsmann himself, thinks highly of the young coach.

“It doesn’t matter if he’s 60, 70 or 28 like Julian. He knows what he’s talking about – that’s the most important thing. If he is explaining something, you trust him for sure,” Polanski told me before comparing Nagelsmann’s style to that of Pep Guardiola and Thomas Tuchel.

It’s certainly a bold move by Hoffenheim. The football equivalent of turning up and playing a gig at midnight underneath a tree outside a club they weren’t booked for. But, just like Pete, they could end up with egg on their trousers if this all goes wrong.