Right in the heart of Munich is Marienplatz. You’ll find many a tourist there gazing up in awe at the iconic town hall and its picturesque glockenspiel. When Bayern Munich win a title, it’s here that you’ll find thousands of fans celebrating with their heroes on the balcony of the town hall.

A two minute stroll round the corner takes you to the Viktualienmarkt, a food market which on Saturday morning was packed with people soaking up the sun whilst fulfilling some of the strongest German stereotypes. 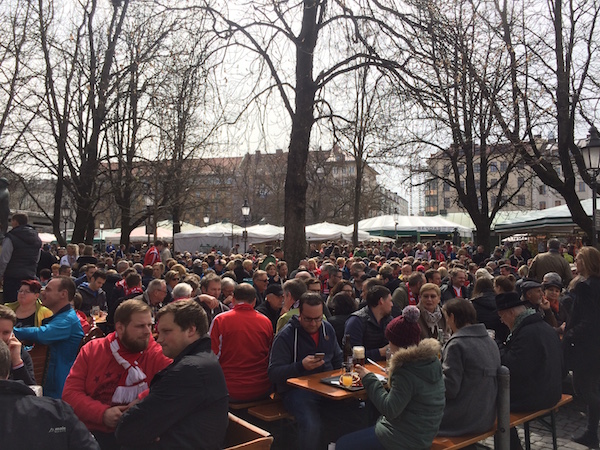 Tell the locals that this looks German and they’ll disagree. This is Bayern (Bavaria), where people are very proud of who they are. Mia San Mia (“We are who we are”) as Bayern Munich’s club slogan goes.

Bayern-born Frank reminds me of that. He’s there along with his wife Simona and son Noor, and they’re all sporting Bayern Munich shirts.

Naturally, he’s holding a beer too as he tells me that Bayern coach Pep Guardiola is the best in the world. Until July that is. When Guardiola heads to Manchester City this summer, then the incoming Carlo Ancelotti will take that title, he says with a chuckle.

Frank says he’ll be sad to lose Guardiola as a coach, but not as a person. Because for him and quite a few other Bayern fans, he’s never bought into the Bavarian mentality. 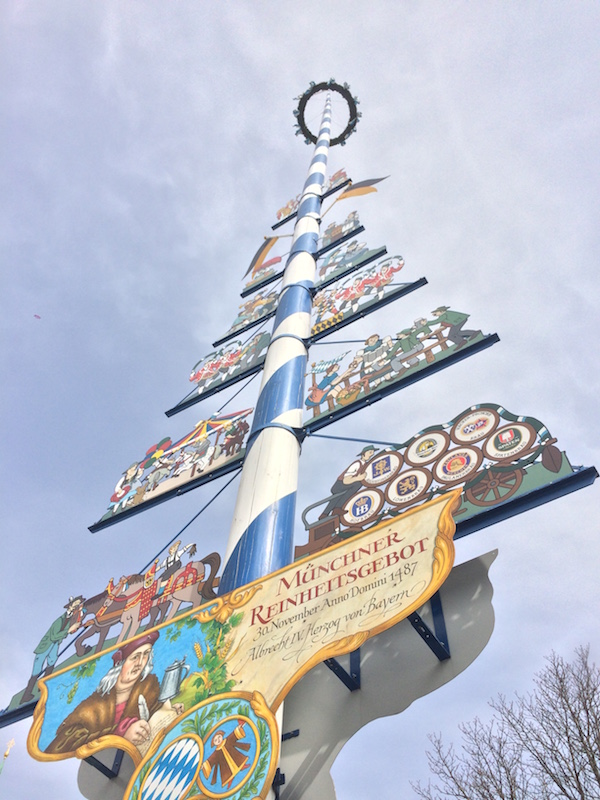 That view is reiterated by other Bayern fans I meet on the way to the Allianz Arena. One of them is Frank Linkesch of kicker magazine.

“I think they respect him but they don’t love him,” says Linkesch in the club’s press conference room.

“They respect him because he has success. Usually the team plays pretty good football. If you watch the games in the arena, it’s fun watching them. They score goals, they win the games.”

“But,” he continues, “I think they don’t love him because he isn’t the kind of person that looks for a relationship to the fans or to the media. He has a distance between fans [and] reporters.”

When it comes to describing exactly what you need to be loved at Bayern, Linkesch finds it difficult to explain.

“It’s about emotion. It’s about getting more in contact with fans and people. Maybe give people the feeling that you love this club. Pep didn’t or never gave this feeling. Everybody knew it was a project for him, three years and he will go on [to the] next club.”

Believe Guardiola’s press conferences though and you’d think that he is at least very fond of his players. Back in November, Sky Sport News in Germany ran together a string of his declarations of love for his players.

“I love training with [Jerome] Boateng.”

“[Arjen] Robben is an outstanding professionally.”

“[David] Alaba is one of the best professionals I’ve met in my career.”

Linkesch can reel off another two himself. A few weeks before striker Mario Mandzukic left, Guardiola said: “I love Mario,” and two weeks before defender Dante exited, Guardiola spoke of how he would like to have a thousand Dantes.

“He doesn’t tell the truth,” says Linkesch as he explains that it’s been tricky to get to know what Guardiola is like. The Manchester press corps might be disappointed to hear that he doesn’t given any one-to-one interviews either. As a result, Guardiola’s only been available at press conferences and as Linkesch puts it: “I think that we [the media] are getting on his nerves.”

“He has the support of [chairman] Karl-Heinz Rummenigge and [sporting director] Matthias Sammer. He doesn’t care about us and he doesn’t need to.”

Linkesch is right too, because whilst the relationship between Guardiola and the Munich press has been frosty, Bayern are still set to make it three Bundesliga titles from three in his tenure. They edged closer to that on Saturday afternoon thanks to another man at the Allianz Arena called Frank. Well actually, it’s Franck.

He’s also recognisable by the name “Ribéry” which adorns the back of his shirt. He was presented with a bouquet of flowers by the club before the Eintracht Frankfurt game. This was to mark his 200th Bundesliga appearance for Bayern which came just before the international break and in return, Ribéry offered up with something special for game number 201. His spectacular overhead kick in the first half was enough to beat Eintracht Frankfurt. 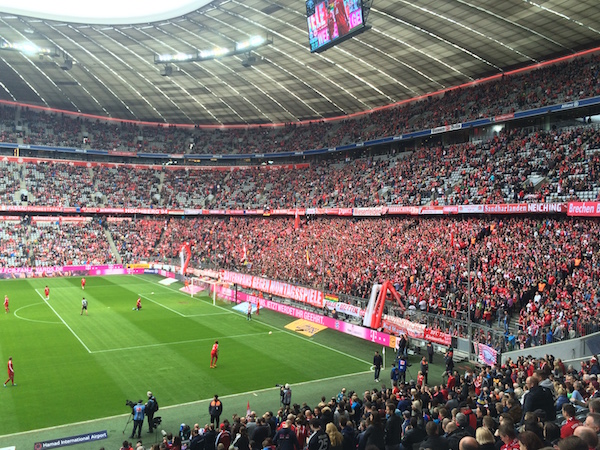 His goal highlighted a problem that Guardiola might have at Manchester City – namely, that for all the money spent, they lack the same number of world class players that Bayern have in their squad. City can expect “many, many transfers” says Linkesch.

Guardiola’s time at Bayern has shown too that it doesn’t matter if you’re a fan favourite. If you don’t fit into his way of playing, then you’ll be frozen out. By the time Bastian Schweinsteiger left Bayern Munich last summer, he certainly wasn’t at his peak but the decision to part with him still upset many Bayern fans.

They won’t be too upset if Mario Götze leaves the club in the summer. True, he scored the winning goal in the 2014 World Cup final but the poster boy for Germany’s triumph hasn’t fulfilled the considerable potential he showed before at Dortmund.

A lengthy injury this season hasn’t helped but he did start on Saturday, taking the shot which created Ribéry’s winner. The problem is he’d been an unused substitute for Bayern in five of their previous six Bundesliga games.

He only has one year left on his deal. Bayern have announced the contract extensions of several key players like Thomas Müller, Jerome Boateng and David Alaba in the past few months. It’s become rather obvious that Götze is not seen in that light.

According to Linkesch: “The only chance that he will stay with Bayern Munich is if Carlo Ancelotti tells him: ‘Mario I need you, you are the player I want to work with.’ In any other scenario, I think he will leave [this summer].”

By the time the summer does come around, Guardiola will have left Munich. With Bayern having a five point lead with six games remaining, it’ll be a big shock if he’s not holding the Meisterschale (Bundesliga trophy) aloft in Marienplatz come May. If he’s holding the Champions League trophy too, the question over whether he’s been successful in Munich will be answered – and that might earn him a little more love in Bavaria.