Zülpicher Strasse is somewhere, so I’ve been told, that smells a lot better on a Friday night than on a Sunday morning. Two months into my German adventure, where better to see if I could blend in as a German.

In the dimly lit, graffiti-daubed Stiefel bar, I sat with my flatmate Chris, his new ‘girlfriend’ (inverted commas applied, at his own risk, by Chris) and her mates, none of whom knew I was an “Englander.”

I smiled and nodded. I laughed in the right places. Most importantly, my beer was small. For the people of Cologne drink their beer, Kölsch, out of small glasses to keep it cold and fresh. And to each anecdote told by a member of the group, I seamlessly responded with a “ja” (yes), “natürlich” (of course) or a “genau” (exactly).

Chris knew my plan and to my delight, ten minutes in, his ‘girlfriend’ (really, Chris?) and her mates were still none the wiser. In hushed tones, Chris told me to speak quicker or else my cover would be blown. Instead, it shook my composure.

When I was asked what I did for a living, I fumbled. In fluent German, I said that I was an English journalist. It’s fortunate that I know so many German swearwords. But my chances of continuing in German had diminished. Once you reveal that you’re English in Germany, a lot of Germans will see you as target practice and, in an effort to improve their own skills, will only speak to you in English.

I had to wait until Friday night to properly practice my German once again. A fifteen minute cycle ride from home took me once more to Cologne’s Rhein Energie Stadion for my latest test. This time it was speaking to Cologne fans before their game with newly promoted Ingolstadt. 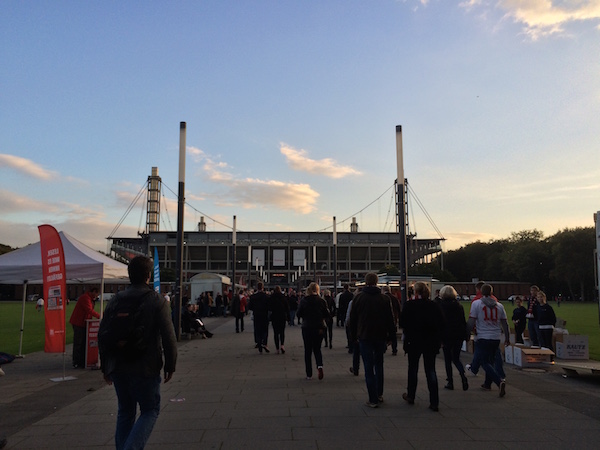 In a shock twist, the five or six I spoke to in German were very happy both not to speak English and revel in Cologne’s best start to a season in 19 years. However, there was one wily fan called Daniel. He sniffed out my Englishness and took his opportunity to have a few minutes practice with me “auf Englisch”.

Now to be fair, his English is much better than my German but he raised a point which English speakers need to know – the Germans have great, great difficulty saying the word, “squirrel.” Eloquently, he tried to tell me how Cologne need to get to 40 points (yup, that cliché is multi-lingual folks) and made the analogy that Cologne were like a “squizzle” trying to collect their nuts for winter. I actually prefer squizzle.

It looked as if the squizzels were going to prosper when top scorer Anthony Modeste looped Cologne into an eleventh minute lead. The nuts were to ultimately be shared though as birthday boy (or “Ingolstadt captain”) Marvin Matip scored a first half equaliser. 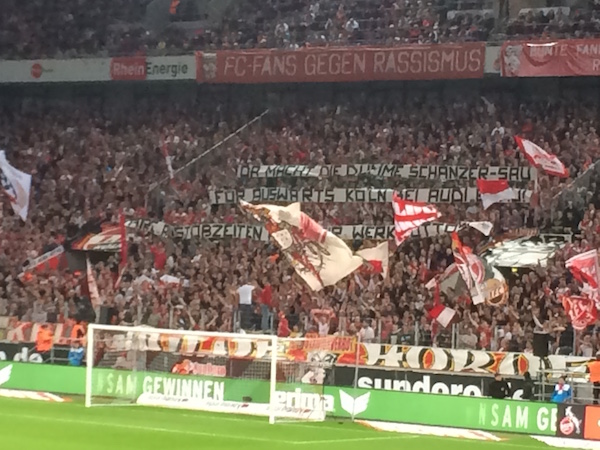 The Japanese journalist to my left was dissatisfied with the 1-1 scoreline. That could be discerned from the high pitch squeal he emitted when his fellow countryman Yuya Osako spurned a great late chance for Cologne. Indeed, Osako’s Danish team-mate Fredrik Sorensen affirmed to me afterwards that they weren’t sharp enough in front of goal before detailing his own personal struggle. Sorensen is also having German lessons, along with top scorer Anthony Modeste and Serbian midfielder Milos Jojic.

He keeps cool about it, but that’s to be expected when Sorensen is nicknamed the Ice Man, if you believe the ever veritable Wikipedia. Yet the lanky Dane does say that his team-mates have laughed at him when he makes mistakes in German – a feeling I know all too well.

Having left the stadium, Friday night provided one final skirmish in the battle to blend in. Three students stopped me whilst making my way home. I politely refused their offer of nightclub tickets but they picked up from my German that I wasn’t from round these parts. I was apparently either Dutch, Belgian, Danish or Swedish. I told them the correct answer they were looking for was “Englander.” Puzzled, they said I definitely sounded Dutch. Progress had been made – at least they thought I was from the other side of the English channel. Unless, of course, all I’ve achieved in two months is to sound like Steve McClaren…