It’s quite an achievement by Roman Bürki that despite being the winning goalkeeper in a 7-1 victory, he managed to be the main talking point of the game. That’s not what he wanted but when Borussia Dortmund’s second round DFB-Pokal game against Paderborn was goalless, Bürki was caught out spectacularly.

In German, the Swiss stopper described what he did as “eine Scheiß-Aktion von mir” (“a shit move from me”). When speaking to him in English, Bürki described it as a blackout. In football parlance, it was a howler.

Twenty one minutes in, 25,000 Dortmund fans were merrily singing behind Bürki on the club’s towering Südtribüne, better known in English as “the yellow wall”. Nothing was up when he threw the ball out to midfielder Ilkay Gündogan. It came back quickly to Bürki though from Gündogan, quicker than he was anticipating anyway. By now, opposition striker Srdjan Lakic was bearing down on him. Bürki had to clear, or else Lakic would get the ball and score.

It is the moment that every fan has kittens over when their goalkeeper gets the ball. They think the worst, that their goalkeeper will lose the ball to the striker who will then score. For Borussia Dortmund fans, that became a reality as, six yards from goal, Bürki lingered for a second too long on the ball. A poor second touch from the Swiss allowed Lakic to stick the ball into the Dortmund net.

“When the ball was in the goal, I had fever. I was sweating,” says Bürki after the game, looking an awful lot cooler now than how he felt then. It is one thing for a goalkeeper to make a mistake. As Bürki’s description let on, it’s even worse when you’re the Borussia Dortmund goalkeeper in front of the imposing yellow wall.

Fortunately for Bürki, his team-mates had no problem in scoring at the other end. Dortmund stuck seven goals past a defensively naive Paderborn. Of course, it’s not easy for a second division club to play away at Borussia Dortmund but the attacking manner in which coach Stefan Effenberg set up, did not help the visitors cause. The former Bayern Munich man’s first defeat since taking charge earlier this month was comprehensive and he was fortunate too – the result could have quite easily run into double figures, such was Dortmund’s dominance.

Bayern Munich may be still ahead of them in both the Bundesliga and quality of play but the attacking supremacy from Borussia Dortmund on Wednesday showed just how much of a force they still are. Their seven strikes against Paderborn took their goal tally for the season to 61 after just 19 games.

Each goal though was treated equally by Dortmund’s yellow wall. They roared the equaliser by Adrian Ramos with the same ferocity as they did when Henrikh Mkhitaryan tapped in their seventh in the final minute. In their eyes, a goal for Dortmund is a goal for Dortmund and that is to be wildly celebrated. 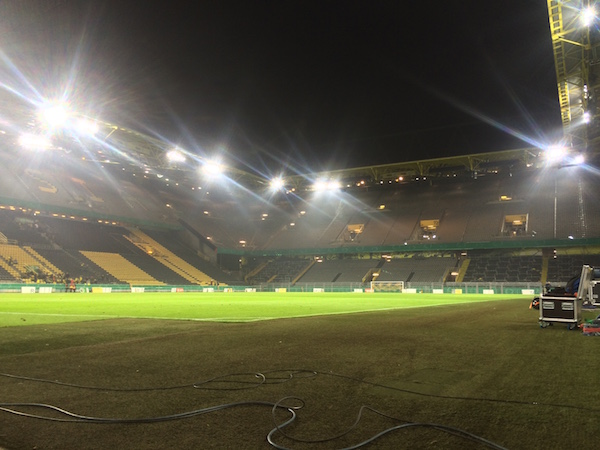 “It gives you a lot of confidence. I’m happy they don’t think: “Oh shit! He’s made a mistake. They stand behind me and this is really nice.”

Now is perhaps a good time to say that Bürki wasn’t just swearing for the hell of it. In Germany, that word in particular is sprinkled liberally in post match interviews if something hasn’t gone according to plan. Yes, it’s noted that Bürki is Swiss but the point is that swearing is much more commonplace in German media than it is in their English speaking counterparts.

Either way, what’s more pertinent here is how supportive the Südtribüne were after his mistake. Much was made at the beginning of the season when coach Thomas Tuchel chose Bürki over long time favourite Roman Weidenfeller as the number one for the new season.

The reaction of the Dortmund fans though was an affirmation of how well Bürki has done in general since joining in the summer and proof that the yellow wall has a softer side to its boisterous bravado.

His team-mates also stood behind him. Captain Mats Hummels came straight up to Bürki after his mistake to give him a reassuring pat on the head and a word of encouragement. “He just said: ‘Come on’. I know that the players don’t think: ‘oh shit, I can’t play the ball to him again.’  This does not happen.” 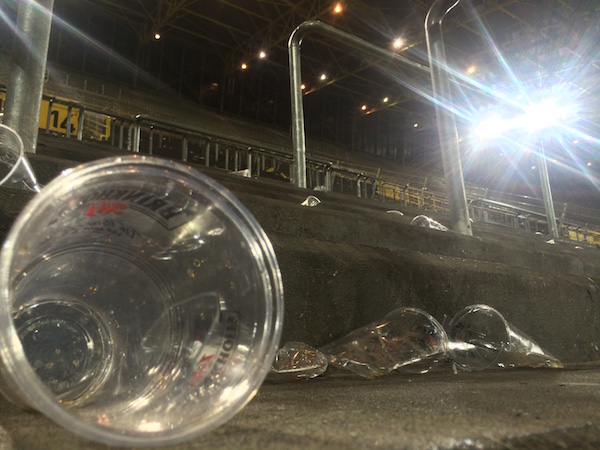 Bürki was fortunate that within nine minutes of his howler, Dortmund had turned the game around. On another day, he might not have been so lucky but he knows the strength of the side that’s in front of him.

“It’s an excellent feeling when I know that when we get a goal, we can score two or three or four,” with the Swiss choosing not to continue all the way up to seven. It was ultimately those goals that mattered most on Wednesday night but the one for Paderborn will serve as a warning to Roman Bürki and no doubt, to others.

Goalkeepers having the ball at their feet is commonplace in football now. Manuel Neuer has made it look effortless for Bayern Munich and for Germany but on this occasion, Bürki showed just how easily things can go wrong.