The faith shown in Swansea City by its rescuers, who saved it from bankruptcy in 2002, dramatically changed the life of the club. Fourteen years later, it has now returned the favour.

For when the Premier League ratified the proposed takeover by American investors Steve Kaplan and Jason Levien this July, it allowed the fairy-tale to come full circle and reward those who started it. Sixty per cent of the club is rumoured to have been purchased for between £30m and £50m, with the Supporters Trust retaining its 21% stake.

One of those who invested in the club in 2002 was John van Zweden, who’s from Den Haag in the Netherlands. On a trip to the London as a teenager, Zweden saw Swansea play for the first time against Fulham and fell in love. Learning English at his school in the Netherlands, he was told to find a pen pal and decided to write to the diminutive Welsh club that had captured his heart. 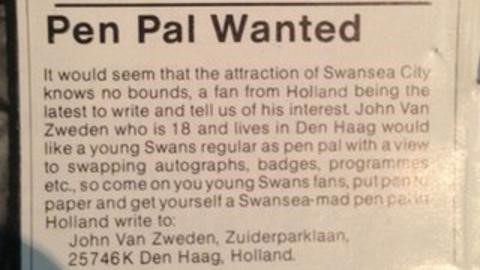 He became close friends with David Morgan, who would later ask Zweden if he were willing to “pay some money to help save the football club.” At the last minute, an investor had pulled out, and the consortium planning to rescue the club were £50,000 short. Zweden rushed to Swansea after a trip to the bank, and the fairy-tale began.

“I absolutely thought that I would never see a penny back,” says Zweden, when asked if he had any inkling that his investment might be as profitable as it has turned out to be. “No. None of us thought that.”

According to Dutch reports, Zweden stands to make roughly £7m from selling his stake in the club. Still, why sell now?

“We could not bring the club any further,” he answers. “We all were not rich enough. I have a daughter who is unwell, her future is safe now, and that makes me very happy. I will always follow the Swans, home and away, and I am very happy we brought the club where they are now.”

Had Swansea’s investors been interested in the money alone, they might have sold years ago. But a recent openness to the idea of external investment on the part of Swansea’s directors is as much about recognising the limits of efficient frugality.

The club has climbed so high because of how well it has been run, but this has not been without some difficulties, particularly financial liquidity. Where other Premier League clubs can borrow or receive investment from their owner, Swansea have been able to do no such thing up until now.

The takeover has not gone completely smoothly. The Supporters Trust were particularly peeved to only hear about it once it had been leaked in the press, and were characteristically and diligently sceptical of foreign investors. But their tone has changed slightly in the last few years, and they too now recognise the need for “sustainable investment, especially for projects such as stadium expansion.”

Quite how Swansea intend to balance their unique level of fan involvement with the takeover remains to be seen. Though Kaplan and Levien have been fairly quiet on the matter, they have carefully emphasised their desire to keep the current structure of the club in place.

Huw Jenkins and Leigh Dineen, who have been the driving administrative forces in Swansea’s rise, will keep their positions as Chairman and Vice-Chairman respectively.

“If they do what they promise, we will all be very happy,” says Zweden. “I’ve spoken to Jason a few times, and he seems like an honest guy to me. The Trust will keep their shares, and we’ve got Jenkins and Dineen staying.”

Amid the clamour of the riches of the Premier League, ‘ambition’ is a fairly short-term concept and patience is a rare, if not all but extinct, virtue. Fans are hungry for transfers, often seen as the only solution, while owners and investors demand immediate results.

Swansea’s ambitions are more long term, fuelled primarily by the fear that comes from knowing all too well what you stand to lose. Staying in the Premier League is the main priority, followed by stadium rejuvenation, infrastructure upgrades, and trying to cement a place at the top of the league’s mid-table. That the fans have a tangible influence on the club allows for consistency in these ambitions from the board to the stands.

Though their part in the fairy-tale may have ended, those who started it will be sticking around to see how the rest of the story pans out. “You cannot get rid of me in Swansea,” says Zweden, who spent the beginning of the summer following Wales in France as an honorary dual citizen. “The future is bright!”