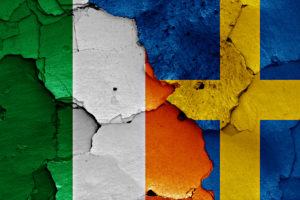 Both these teams qualified after winning play-off matches and look to have a tough task in reaching the next round. There’s a big gap between these two and the other two in the group (Belgium, Italy), but in this game they should find themselves pretty closely matched.

The Republic of Ireland scored just eight times in their eight qualifiers so their tactics look clear. Including their play-off matches against Bosnia (and excluding the matches against Gibraltar) nine of their 10 qualifying matches had fewer than three goals. The relatively negative approach of this Irish side means they see plenty of draws and since 2011 they’ve finished level in six of their 10 games against teams ranked within 10 places of them while winning only once.

Since 2013 Sweden have slipped from 13th in our world rankings down to their current 29th as they’ve won just three of 14 matches against teams that were within 10 rankings positions of them while losing eight times. They’ve kept only one clean sheet in those matches and half have had at least three goals. However, against this Ireland side we’d definitely be leaning more towards a low scoring affair and eight of Sweden’s 10 group qualifiers had fewer than three goals, although both play-off matches against Denmark saw at least three strikes. In the goals markets Under 1.5 looks a good price at 2.4.