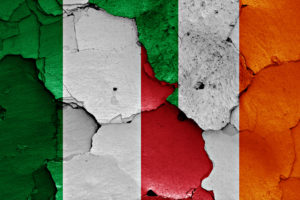 Italy have shown themselves to be one of the most consistent teams at this year’s European Championships.

Antonio Conte has shown a remarkable tactical awareness to overcome both Belgium and Sweden without conceding a goal, limiting their opponent to just three shots on target between them.

Gli Azzurri are generally regarded as a side that can always fight their way out of the group stages and this tournament has been no different.

Guaranteed qualification with one game still left to play, only a disastrous result against bottom placed Republic of Ireland will see them finish any lower than the top of the group.

The Boys in Green have put up a fair fight and, although qualification is still mathematically possible, they face an uphill task if they are to get anywhere close.

Only a loss for Belgium against a Sweden side yet to register a shot on target at this year’s competition and a comprehensive Irish victory over Italy will see them qualify automatically.

They could potentially still qualify in third, but the competition for those spots is fierce as the group stages draw to a close.

Conte has admitted that he plans to field a changed side from the one that has dominated the last two games but I can’t see Italy throwing away a potentially perfect group stage performance.

Recommendation: Italy win to nil at 3.40

Winner Sports
100% deposit match for new members
Betway
Shane Long to score anytime and Republic of Ireland to win at 11.00
Winner Sports
Italy to Win & Keep A Clean Sheet at 3.75
William Hill
Ciro Immobile to score and Italy to win a 7.00 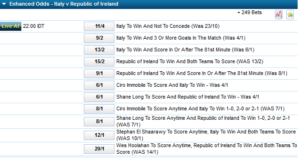