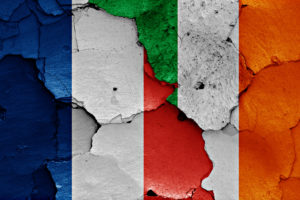 France have been the higher ranked team in a knockout match six times this century and while they’ve won the tie (including the final of Euro 2000) five times they’ve secured the victory in 90 minutes on just three occasions. The Euros followed the same format from 1996 to 2012 where 16 teams started the tournament and then the top-two in each group made up the quarter-finalists. The expansion to 24 teams has thrown a spanner in the works and created eight new knockout matches this time around. In the 35 knockouts since 1996 (ignoring consolation matches) the higher ranked side has won in 90 minutes just 14 times while an incredible 24 of the matches have had Under 2.5 Goals. 19 of the 35 were goalless at the break. We would expect this match to follow a similar theme to all of France’s group matches where their opponents sat back and kept things tight. All three of France’s games in Group A were 0-0 at half-time.

Ireland, along with Hungary, made it to the knockout stage of 2016 despite being involved in a playoff to reach the group stage. The Boys in Green beat Bosnia-Herzegovina 3-1 on aggregate to get to France. 10 of their last 13 competitive matches have featured Under 2.5 Goals including both legs in that playoff. The outsiders here have faced top-10 opposition seven times in recent years including friendlies and won just once – an incredible 1-0 victory over the World champions in qualifying. Five of the seven fixtures had Under 2.5 Goals and four were goalless at the interval.

Hello all, It was a disappointing weekend of betting as sadly the…