Belgium have, in recent tournaments, appeared to be lesser than the sum of their parts.

Despite being able to boast some of the finest young talents in the world, plus a hugely experienced defensive and midfield core, Belgium continue to flatter to deceive.

A lacklustre peformance against Italy continued an underwhelming run of form that began at the 2014 World Cup, and manager Marc Wilmots must admit that change is needed, otherwise this could be another disappointing performance for such a promising team.

Republic of Ireland, however, were unlucky not to beat a Sweden team many thought would walk all over them.

Able to keep Zlatan Ibrahimovic quiet for much of the game, only a Ciaran Clark own goal cancelled out Wes Hoolahan’s opener and the Boys in Green were unfortunate not to come away with more than a point.

Belgium could prove a sterner test, however, and remain a team not to be underestimated. Depending on what Red Devils side turn up, this one could go either way.

Betway
Kevin De Bruyne to score first and Belgium to win at 9.00
William Hill
Marouanne Fellaini to score a header at 13.00 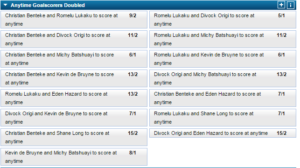 Kevin De Bruyne to score first and Belgium to win
9.00
Belgium to win and both teams to score
4.33
Belgium vs Republic of Ireland Betting Tips
5 (100%) 1 vote

Lee Clark is playing the waiting game. “The longer you stay out…