Millions watched during the 2015 Women’s World Cup as England’s Lionesses captured the bronze medal as well as the hearts of a nation. In The Roar of the Lionesses Carrie Dunn follows some of the most famous – and not so famous – female footballers in the country over the course of the year after the amazing campaign in Canada, and looks ahead to the game’s future.

In this extract, the amateur players of Tottenham and Cardiff face each other in the Women’s Premier League Cup final. The Roar of the Lionesses is out now, available in all good book shops.

The pleasantly Proustian aroma of a coal-fired train filled the air at Kidderminster. As morning turned to afternoon, a small group of people disembarked the nearby branch line, which connected the town to Birmingham.

A young man in a blazer asked an older man in a tie for directions to Aggborough. It transpired he was the fourth official for the afternoon’s FA Women’s Premier League Cup final – and the stadium official was happy to guide him through the new housing estate next to the station, a shortcut to the ground.

Aggborough is positioned between a residential street and a railway line, with a capacity of around six and a half thousand. It has previously hosted men’s junior internationals, as the stadium official boasted, and they were looking forward to welcoming the women’s game for one of the showpiece end-of-season events – the Women’s Premier League Cup final.

It was a perfect day for football as well. Inside the stadium, as the sun beat down with a pleasant breeze swirling across the stands, the groundsman was putting the final touches to the pitch, mixing the smell of freshly cut grass with the nearby steam train. Meanwhile, the staff in charge of the stadium sound system were testing out the speakers, ensuring the national anthems were ready – ‘Hen Wlad Fy Nhadau’ for Cardiff City, and ‘God Save The Queen’ for Tottenham Hotspur.

The Cardiff squad were the first to head out to get a feel for the conditions, walking around the pitch and assessing the ground – beautifully green across most of the playing area, with some sand on the touchline and in the goalmouths. The referee and his assistants did the same shortly afterwards, and were followed by the Tottenham players. There was a tangible feeling of excitement, even before the gates opened to admit the spectators; the players were noisy, laughing, and both squads took the opportunity to cluster together for ambitious selfies.

The players’ families were gathering already, proudly snapping pictures of their daughters as the team coaches went through the pre-match pleasantries, shaking hands with the dignitaries. Loud chart music accompanied the warm-ups as fans filtered in, quickly ushered away from the directors’ box area and into the neighbouring blocks of seats. It soon became obvious why – both squads had brought plenty of volunteers and staff with them, and they had reserved those particular places.

The refreshment kiosk near the turnstiles was doing brisk business. A local girls’ team began a walk round the perimeter of the pitch, all the better to take up their position as ball girls after kick-off. They just missed being caught by the pitch sprinklers, which sprang into action to dampen the somewhat dry sidelines. Bottled water was the order of the day for the squads, readying themselves for the warm conditions. Cardiff also welcomed to the pitch their mascot for the afternoon – the four-year-old nephew of captain Abbie Britton. He and his family had travelled up from Bristol that morning, and the little boy was in his element running around and joining in part of the goalkeepers’ warm-up.

The stadium announcer read out the teams, and, as often happens at these kinds of games, it became very clear where each player’s friends and family were sitting as cheers rang out in different places across the stand after each name. There was a scattering of replica shirts around the ground too, indicating club allegiances as well as support for loved ones.

After a quick huddle and the customary exchange of pennants by the captains, then a minute’s silence to commemorate Victory in Europe day – during which the only sound was bird song plus intermittent imitations indicating the arrival of a text message somewhere in the ground – it was time for the afternoon’s serious business to begin.

It was a hugely entertaining game, worthy of a cup final. Both sides were committed to good attacking play, with Tottenham more threatening from open play and Cardiff putting on the pressure down the flanks to force set pieces. With such industry on show, it was no surprise that water breaks were necessary throughout as players and officials alike took every opportunity to rehydrate themselves. Tottenham’s Bianca Baptiste was a physical threat, luring the Cardiff defence into fouls, but her best chance of the first half came as a one-on- one, saved well by keeper Alesha McGlynn – that was, until the half-hour mark, when she followed Leah Rawle’s attempted lob up excellently to slam the ball into the roof of the net from close range. Hope Souminen grabbed a spectacular equaliser on the very stroke of half-time, though, beautifully chipping Toni-Ann Wayne to level things up.

As legs tired, the play got slightly scrappier, with long, lofted balls forward. With no more goals in the second half, it was into 30 minutes of extra time. Nerves were evident around the ground as the teams gathered to receive their instructions from their coaches – who shook hands once more as the referee Darren McMillain blew his whistle for the resumption of the game. Wendy Martin thought she had put Tottenham back in front, but assistant referee Kat Davey had long had her flag raised for offside.

For a large portion of the second half, the skies had clouded over; as the final reached its denouement, the sun broke through once more. Yet for Cardiff it looked set to be a dark day as goalkeeper McGlynn took a nasty blow to the face, falling to the ground, and eventually having to be helped off towards the end of the first period of extra-time, face covered in blood. They had already used all three of their substitutes, meaning Hannah Mills bravely stepped up, swapping her blue shirt for the yellow one, and taking McGlynn’s gloves as the stricken keeper walked slowly and gingerly back down the tunnel, supported on either side by backroom staff.

Tottenham piled the pressure on, while Cardiff packed their back line, protecting their stand-in custodian, hoping they could cling on for the drama of a penalty shoot-out. The ten women could not last, though; in the very last minute of extra-time, Maya Vio got the final touch from a corner past Mills. The celebrations from the dugout spilled out briefly on to the pitch, before the coaching staff gathered themselves and took their seats again for the remaining seconds.

When the whistle blew, the Cardiff players sank to the turf. They could not have given any more. The Tottenham team, meanwhile, were delirious, lifting Vio to their collected shoulders. The presentation podium was quickly put together, with medals given to the match officials first. Touchingly, as the runners-up wiped their disappointed tears away and prepared to line up to collect their medals, the ones which nobody had wanted, the champions calmed down and formed a respectful guard of honour, applauding each of their opponents.

Cardiff returned the compliment as Tottenham collected their medals and captain Jenna Schillaci lifted the trophy. Champagne – in bottles marked with the competition logo – was sprayed everywhere, and the Welsh side made as swift an exit as they could manage.

Captain Britton immediately put her medal around the neck of her small nephew.

“It’s nice to see so many people supporting the women’s game as well,” she added. “It’s growing. He loves it. I’m glad he was here.”

Clearly exhausted after 120 minutes of strenuous draining cup final football, she was disappointed but quick to pay tribute to her players. She revealed that one had picked up a hamstring pull, forcing her to be substituted in normal time, and another had felt a twang during extra time, meaning that for the last 15 minutes they were effectively playing with nine.

“I think when we went into the second phase of extra-time, we would have taken penalties,” Britton said, and added that she thought in the last 15 minutes Tottenham had been the better team. “Credit to Tottenham – they did well and kept going, just like we would have.”

Britton was based in Exeter, and worked full-time in office administration, travelling to Cardiff once a week for training.

“It’s all worth it – unfortunately not on days like today,” she said. “But it is worth it when you do win and you play well and you’ve got all the girls around you.”

Her opposite number, Tottenham skipper Jenna Schillaci, was so delighted that she could barely express it.

“It’s absolutely amazing, I can’t really believe it!” she said. “We worked so hard. We deserve it. I’m so proud of every single player. We played two finals already, and last week we lost. We could have easily dropped our heads but we’ve come back stronger and finally we’ve got the trophy we wanted.”

First-team manager Karen Hills was more measured but equally happy with her players.

“Credit to the girls, I thought they were fantastic today,” she said. “Their work rate was excellent, the belief was there, they kept going right to the end.”

She was swift to ask about the wellbeing of McGlynn and send Tottenham’s best wishes to her, even in the midst of the celebration, and paid tribute to Cardiff and everyone who was part of the occasion.

“I thought it was a great spectacle of women’s football – the atmosphere was good,” she said. “We’ll regroup, review the season – everyone’s just going to have a bit of a break over the next couple of weeks. Then we start again, obviously building on what we’ve already done this season, continuing the momentum, and hope we’re in the same position next season.”

She was cautious about the rumour that the women would get to play at the men’s famous ground at some point in 2016-17.

“There have been people speaking about it, but nothing’s been cemented, nothing’s been confirmed,” she said, before adding with a smile: “If we do, it’ll be fantastic for the ladies and obviously being the last season at White Hart Lane it’ll be part of history.”

In the bar afterwards, the Cardiff players remained subdued. Stand-in goalkeeper Mills had two fingers taped up; she had broken them when she made her first save, batting the ball away and catching her hand awkwardly. The news on McGlynn was limited; a broken nose was suspected plus a cut on her face that would require stitches or gluing.

There was not too much time to wallow or celebrate, really; extra-time had drained both squads and they had to get on the coaches back home. After all, they had to go to work in the morning.

The Roar of the Lionesses is out now, available in all good book shops. 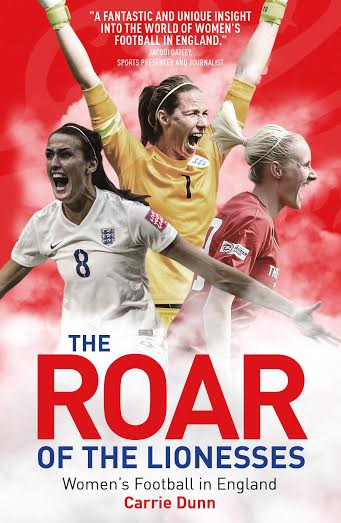