This is an extract from Issue 18 of STAND fanzine, which you can get your hands on in print here or digital here.

May 28th this year marked the occurrence of one of the most significant matches in modern football’s recent history. I’m not talking about the Champions League final. Indeed, now that the celebrations of Real Madrid’s 11th European Cup win have died down, their newest trophy will probably fade into the background with all the rest of them – just one more coin in Scrooge McDuck’s vault.

But for those of us with an interest in grassroots, fan-focused football, the match of the day took place thousands of miles from Milan, across the Atlantic in Hamtramck, Michigan. On a sweltering day in this small enclave of Detroit, FC United of Manchester made their first ever trip to the United States to play Detroit City FC.

Dubbed “The Derby of the People” by prominent DCFC supporter Drew Gentry, the occasion showcased two clubs built on the principles of community engagement, financial sustainability, and putting fans before profits. The 6,245-strong crowd – including around 100 FCUM supporters who made the trip from England, Germany, and elsewhere – were treated to an entertaining afternoon in which the home side equalised in second-half stoppage time to earn a 3-3 draw.

.@FCUnitedMcr make their way to Motown this week. Check out the video from #FCUM ahead of the big visit. #DCTIDhttps://t.co/tSJV2BoXwx

While the story of FC United is well known to many football fans – formed in protest to the Glazers’ takeover of Manchester United and the subsequent runaway corporatisation of the club, including exorbitant ticket pricing – Detroit City are a relative newcomer to the scene. Their location in a country still largely perceived as a footballing backwater has only served to further obscure the club’s rise.

DCFC’s origins can be found in the Detroit City Futbol League, a co-ed recreational competition in which each team is made up of players representing their district. The DCFL was established by Sean Mann and, after witnessing its rapid growth in participation and popularity, he and four friends decided to form a new club to tap into the fervour.

Not only did they succeed, but that fervour around matches continued to grow and mutated into something wholly unanticipated, embodied by Detroit City’s main supporter group, the Northern Guard.

Competing in the de facto fourth tier of US soccer on a shoestring budget – Mann himself cut the grass before the club’s inaugural match using a beat-up mower purchased on Craigslist – average attendance at DCFC matches has increased from around 1,300 in 2012 (the club’s first season), to over 3,500 in 2015.

This success answered most of the questions about the club’s sustainability, but it also created a new problem: consistent sellouts meant people were being turned away at the gate. DCFC had outgrown their cradle, the Cass Tech High School Stadium – affectionately known as “Estadio Casstecha” – and a new home would have to be found. 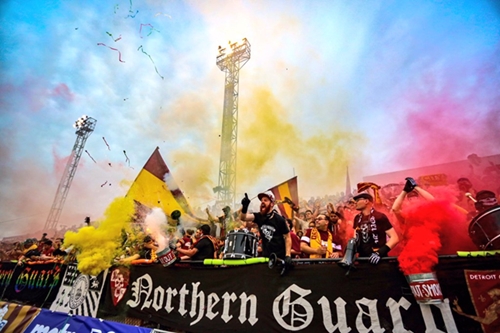 After years of persistent rumours, Detroit City’s ownership decided to move the club to Keyworth Stadium in Hamtramck for the 2016 season. A Depression-era ground built as a WPA project (part of the American New Deal), it opened in 1936 with a campaign speech from Franklin D. Roosevelt, and later served as the site for a similar appearance by John F. Kennedy.

Given its age and the poor economic conditions that have plagued Detroit and many neighbouring municipalities for decades, Keyworth had fallen into disrepair. The wooden benches were broken, there was crumbling concrete everywhere, and the pitch was long past expiry.

Rather than lobby the local government for taxpayer money to fund the renovation project, DCFC’s owners launched a community investment campaign in October 2015 – the first of its kind in the US. They based it on newly-passed legislation that allowed individuals to make small-scale investments in local businesses and start-ups. A different idea to simply donating money, investors earn back their initial contribution plus interest over the course of several years; i.e. if someone invested $1,000 they can expect a return of around $1,300 when all is said and done.

In their New York Times bestselling book Soccernomics, Simon Kuper and Stefan Szymanski argue that the Nick Hornby model of fandom – in which a person falls in love with one club and supports it for their entire life – is largely fantasy. The success of the Keyworth investment campaign provides a relevant counterpoint to this view. In just three-and-a-half months, over $740,000 was raised to restore the stadium to its former glory – and Szymanski, a professor at the University of Michigan, was among the 500 or so individuals who contributed. 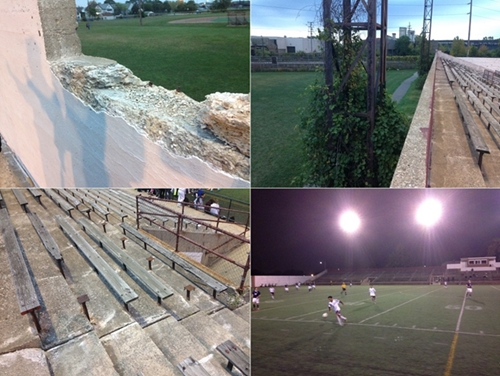 This spring, with the necessary funds in hand and stadium renovations well under way, all focus should have been on the upcoming season, which began in early May with a first-round US Open Cup match.

Instead, Detroit City and their backers were blindsided on April 26th with the news that billionaire NBA owners Dan Gilbert and Tom Gores were teaming up to bring an MLS franchise to the city within the next four to six years.

The announcement was welcomed by some, but the vast majority of DCFC supporters were far more skeptical. The Northern Guard’s response elucidated the major points of contention:

“What we are completely against is getting pro soccer in Detroit at the expense of everything we’ve worked hard on creating over these last 4-5 years. Right now our team has been focusing on the Keyworth project and growing the interest in soccer across the state of Michigan, any plan involving a pro soccer team in Detroit, currently, does not include our beloved DCFC. Why bring in something new when we already have something amazing happening and growing here?

“We do not want an outside ownership group coming in looking only to profit off the supporters, and who don’t give a damn about the community. We don’t want a taxpayer funded stadium in the heart of downtown that is going to require the destruction of historic buildings to complete. Right now the current Red Wings arena being built costs $627 MILLION and taxpayers are on the hook for $450 MILLION of it. We don’t see how large projects like this are good for the fans, the community, or the city. And we believe that kind of money is best spent elsewhere in the city.

“We aren’t interested in joining a league that will use our image in multi-million dollar marketing campaigns but, on the other side of it, ban our supporters for doing the very things they market. MLS has a history of being not supporter friendly, banning fans for up to a year for simply lighting a smoke bomb or throwing streamers.”

(Ed – For more on this, read our previous STAND extract ‘Estranged Relations in Canadian Football’)

To their credit, DCFC supporters used the sudden media spotlight to raise awareness of their own club, resulting in a noticeable increase in coverage by local TV, newspapers, and radio. Thanks in part to the extra exposure, the home opener at Keyworth Stadium on May 20th was a standing-room only sellout, and the crowd of 7,410 set a new record for attendance at a fourth-tier league match. 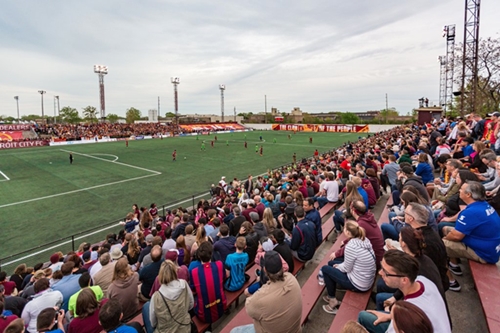 With at least four years until a hypothetical MLS team is founded, Detroit City FC have a decent window of opportunity to capture as many hearts and minds as possible. If the club’s current growth continues, and the Gilbert-Gores plan comes to fruition, a situation unique in the history of American football would arise.

In no other instance has MLS attempted to plant a franchise in a city with a club as fervently-supported as DCFC. If they insist on doing so, the year 2020 may mark the next big showdown between American corporate and fan-built football.

In the immediate future, though, the Northern Guard and fellow supporters will continue doing what they do best: creating a match atmosphere in which their Boys in Rouge thrive and opponents wilt. The battle against those loyal only to their business interests will continue, but for now there are more important matters. It’s another hot, humid summer in Detroit, and City season is here.

You can buy STAND fanzine Issue 18 in print here or digital here.