The Icelandic national team have reached the Euros for the first time in the republic’s short history. But how has a country with a population of roughly 330,000, where the semi-pro national division is played across the summer, risen to such heights? A glimpse into a league match is strangely revealing.

The green and black of Valur FC’s artificial turf meets the blue sky, where an airplane comes in to land on the airstrip in the near distance. Valur decided to change their natural grass for artificial last season as the pitch was proving enormously difficult to maintain in the Icelandic climate. The artificial turf revolution started in 2004, when the country’s FA introduced a campaign to increase the number of pitches where footballers could play and train all year round. Before then it was impossible for teams to train properly in the winter, stifling the national team’s progress.

Stjarnan, the away side against Valur, were the first club to play on artificial turf in Iceland’s Premier League. Their rise has been congruent with the national team. Now, the club from Garðabær is among the richest and best run in the country, but it’s far from a historic powerhouse. They play a fast-paced, attacking style well suited to the turf that allows the ball to bounce and float along the surface. Stjarnan first got promoted to the top league in 2009. They won the league in 2014 and played in the 2015 Europa League qualifiers where they faced Inter Milan at the San Siro. And got slaughtered.

Today, at Valur, both teams are missing their captains and most influential players. Stjarnan´s Baldur Sigurðsson, one of the strongest midfielders in the league over the past few years, is on the bench with a knock. Valur’s Haukur Páll Sigurðsson, a midfield general with two caps to his name who is renowned for being a bit of a madman, will sit out through suspension. Valur usually struggle without him but they will have to find a way against one of the best squads in the division.

The national team’s rise has brought more scouting attention to the Icelandic league, which has led to a number of players departing, mainly to Norway. In turn that has seen more foreign professional players arriving and, with the league played over the summer, a lot of hopeful pros see it as a way of keeping fit while gaining a paycheck and experience at the same time.

Stjarnan are missing their first team goalkeeper, Duwayne Kerr, as he’s currently tending Jamaica’s goal at the Copa America. The 18-year-old, Hörður Fannar Björgvinsson, has been promoted between the posts. It’s becoming rarer for young players to get into the first XI, with many of the better prospects leaving early for famous academies in England and Holland. The ones who stay at home find it difficult to gain playing time. The influx of foreign talent has improved the league’s quality but, in some cases, it has also exiled younger talent to the fringes. It’s an issue that could impact on the national team in the future.

Valur have three Danish players in the squad and two starting the game. Giant striker Nikolaj Andreas Hansen is up front while Rasmus Christiansen is at the back. Christiansen is a relatively small defender for the league but he reads the game well and shuts down Stjarnan’s attacks by intercepting passes or getting around bigger opponents to head the ball away.

Veigar Páll Gunnarsson is a focal point for Stjarnan. He’s a short, stocky forward who was once under contract at newly-promoted Ligue 1 club Nancy after scoring 60 goals in 120 games for Stabæk in Norway. He has 34 appearances for Iceland to his name and is comfortably Stjarnan’s most dangerous player on the pitch, oozing class with every touch and his ability to receive and release the ball under pressure.

Valur’s manager, Ólafur Jóhanesson, stalks up and down the sideline seemingly talking non-stop to the fourth official. He usually wears an ugly black baseball cap advertising a shopping market, but now he sports a Friar Tuck hairdo. Óli has a lot of experience in the league, having brought perennial league Champions FH to the top of Icelandic football. He was subsequently tapped up to the national team but oversaw a disappointing period.

His reign made it clear the national team needed outside influence, and a manager with plenty of international experience was sought to take the team forward. Former Sweden manager Lars Lagerback was brought in and made an immediate difference. Óli Jóh would perhaps argue that he didn’t have the same quality at his disposal, and he’s now doing well with Valur, winning the cup in his first year and bringing European football to the club for the first time since they won the league in 2007.

The second half starts similarly to the way the first half ended. Stjarnan create some good opportunities but nothing comes of their relative dominance. The Silfurskeiðin (silver spoon) support were vociferous in the first half, singing and dancing despite their team’s lack of goals. They are one of the league’s best fan groups and make up a sizeable portion of Tólfan (the 12th man) – the national team’s supporter group which will be making itself heard at Euro 2016.

Both teams are set up in an an attacking manner and neither switches from its 4-3-3 set-up. This is in stark contrast to the national team’s dynamic 4-4-2 formation, often ceding possession but attacking quickly and incisively. Swansea’s Gylfi Sigurðsson and Cardiff’s Aron Einar Gunnarsson complement each other perfectly in Lagerback’s line-up as one sits and breaks up attacks, while the other is central to creating chances. 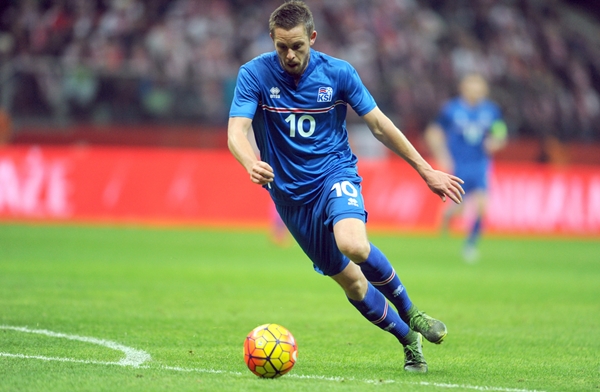 Stjarnan have no luck against in Valur, and fail to please their fans with one of their patented goal celebrations that went viral on the internet a few years back. They used to try fishing, make a human bicycle, or go on a shooting spree. Their celebrations have been toned down slightly since then, perhaps because it takes a lot of imagination to come up with new creations.

The Valur keeper makes several smart saves and punches a cross away confidently. His performance is a far cry from his last game versus Valur’s arch rivals KR – for whom Englishman Gary Martin used to lead the line before joining Vikingur in the off-season – when he made two bad mistakes leading to a goal and inevitable defeat.

Stjarnan, on the other hand, have lost their second game in a row and are dragged down into the mire of mid-table. Hopefully Iceland will have more luck in front of goal than the boys from Garðabær when they kick off their Euro 2016 campaign against Portugal on Tuesday.

You can find a preview of the Portugal v Iceland game here.