The showpiece event of European football has two finalists worthy of the occasion as both have sewn up their respective leagues since their semi-final triumphs. Juve are seeking to win the Champions League for the first time since 1995/96, but Real are no strangers to success in this tournament. They won it for a record 11th time last season and are seeking to break a

nother record and become the first side ever to retain it since it was renamed from the European Cup, with Milan the last to retain it when it was in that guise back in 1990.

Juve have impressed throughout the tournament, winning nine of 12 unbeaten matches, conceding just three goals. The highlight was their 3-0 thrashing of Barcelona over two legs but their 2-0 win at Monaco wasn’t far behind that as they nullified one of Europe’s most potent attacks. Madrid’s route to the final was arguably even harder than Juve’s though. They’ve had to face Bayern and Atletico in the last two rounds, and interestingly the 3-0 at the Bernabeu against their city rivals in the semis was the only time that Real have kept a clean sheet in their 12 Champions League games this season.

We’ve taken a look at past finals and while conventional wisdom might be that matches are tight as neither team wants to give an inch, recently they’ve been pretty high scoring. All of the last 13 Champions League finals have had at least two goals and both teams have found the net in 10 of those matches, including in each of the last six editions. While Juventus probably have the best defence in Europe, we can’t see them keeping a clean sheet here. Madrid scored 106 goals in La Liga this season, they’ve netted in 14 Champions League matches in a row and Cristiano Ronaldo has 10 goals in this tournament alone, including eight in their last four, so both teams to score looks an excellent bet here. Since Chelsea’s miraculous triumph over Bayern on penalties five years ago was the only instance of the outsiders lifting the trophy in the last seven years, we also think Real look too big at 1.8 to continue their dominance in this competition. 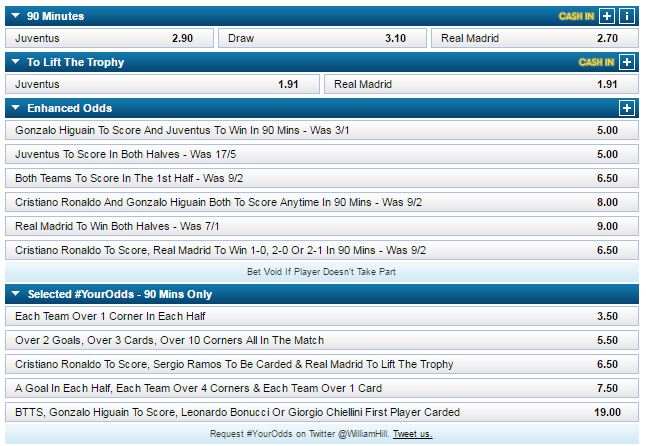 All the best odds for Juventus vs Real Madrid