Good morning. Here is your briefing. Let’s start with some news.

Tis the season for the traditional ‘England player recovering from injury in an unconventional manner’ story. This year, it’s Jack Wilshere who has been photographed outside a trendy London hotspot after allegedly being ejected. He’ll still be in the England squad.

There were ‘Leicester City – Premiership (sic) Champions’ scarves on sale yesterday. Tempting fate a little? You wouldn’t catch me buying one. But PA’s Rob Harris went to speak to the guy selling them. It turns out he’s a Chelsea fan.

Speaking of Leicester, it’s time for Wes Morgan to get a bit of the praise usually reserved for Jamie Vardy and Riyah Mahrez. Step forth, Daniel Storey from Football 365.

A new day, a new FIFA crisis. They’re in these Panama Papers. But of course they are.

But the best read of the weekend was Daniel Taylor on Paul Gascoigne’s continuing struggles.

It’s a Champions League week (though when is it not a Champions League week?) and there is a whole stack of football for you to watch. It’s a quiet start tonight though. Sky Sports 3 are going with Levante vs Sporting Heehon at 1930 and BT Sport Europe have got Bologna vs Verona at 1945. However, you might prefer to watch Arsenal U18s vs Manchester City U18s on ITV4 as they play the second leg of their FA Youth Cup semi-final. Is the City academy as good as everyone says? They lead 2-1 from the first leg.

After being embarrassed in their own house by Real Madrid, Barcelona could do with one of those nice easy procession games they have so often in La Liga. Sadly, that’s not going to happen. Instead, they’ll be battered from the first minute to the last by the ceaseless aggression of Atletico Madrid on Tuesday. Sounds fun. If you don’t fancy that, however, there’s Bayern Munich vs Benfica on the other side. As always, it’s BT Sport you want for this.

It’s the natural resources derby on Wednesday as Oil goes up against Gas in the Champions League. PSG have home advantage and, arguably, personnel advantage, given that their players can’t stop winning. That said, Manchester City actually looked up for it on Saturday when they obliterated Bournemouth. Perhaps they’ve just been saving themselves for this. If you’re not bothered either way, why not catch Wolfsburg vs Real Madrid. It’s BT Sport again.

We’ll be sending TWO writers to Borussia Dortmund vs Liverpool on Thursday so keep your eyes peeled for loads of stuff on here soon. There’s loads of Europea League action and you can find it all on BT Sport’s many, many digital options.

We have the usual selection of vaguely interesting European football for you on Friday. Hertha Berlin face Hannover on BT Sport Europe at 1930. Granada play Malaga on Sky Sports 5 at 1930. There’s Montpellier vs Lyon on BT Sport Extra 2 at 1930 and Hearts vs Aberdeen on BT Sport 1 at 1945. England’s women play Belgium’s women on BBC2 at 1955 or alternatively, you can watch eleven youngsters that Chelsea will never, ever put in their first team when they play Blackburn’s U18s in the second leg of their FA Youth Cup semi-final. Chelsea lead from the first leg.

BOOK OF THE WEEK
The British codified football, developed football and sent missionaries* around the world to teach football. And how did the world repay us? By beating us relentlessly for decades. Rory Smith’s new book ‘Mister‘ tells the story of those missionaries and, while we’re only basing this on the 100 pages we read in a beer garden on Bank Holiday Monday, he tells it very well. If you liked Inverting the Pyramid, you’ll like this. It’s out later this week.
(* – Sort of. Those missionaries were usually people who had to leave the UK to find work because they weren’t considered Proper Football Men) 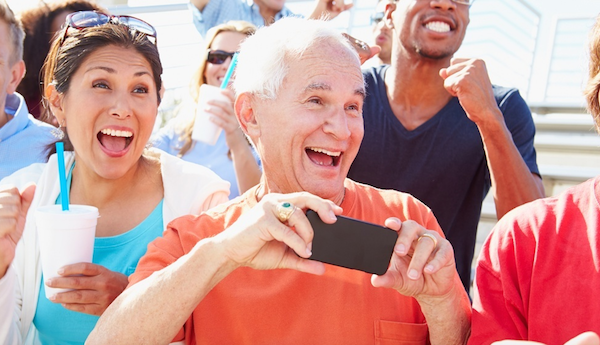 We still don’t get it. One or two pictures is perfectly understandable. A selfie here, a wobbly panorama there. But why would you watch an entire game through the lens of an iPad? We vented in February last year. We’re still venting now.
NON-FOOTBALL THING OF THE WEEK
No longer having to wake up at the crack of dawn to finalise TV listings.
If you’d like to recommend something for next Monday’s briefing, get in touch by emailing [email protected]