What a strange weekend. We’re not sure whether it was the sun, the alcohol or a combination of both, but we passed out at some point on Saturday afternoon and had the weirdest dream. Leicester City were Premier League champions and, on the day they were presented with the trophy, Andrea Bocelli turned up at the King Power Stadium, dressed in club garb, to serenade Claudio Ranieri and the crowd with Nessun Dorma. They even gave Danny Simpson a medal. That’s the last time we’re drinking in the heat for a while…

Back to reality and the race for fourth place just got interesting. Rudderless Manchester City, bemused by Manuel Pellegrini’s pre-match team talk – “Yeah, just do what you want. I really don’t give a fuck anymore” – threw away the lead twice against Arsenal to draw 2-2. It’s now OUT OF THEIR HANDS as City wait for Manchester United to play their extra game against West Ham on Tuesday. The Hammers should be up for it, given that it’s the last match at the Boleyn Ground, but then again they were dicked 4-1 at home to Swansea on Saturday and it’s very difficult to play football in flip-flops.

With City and United scraping around just to reach August’s Champions League qualifying round, suddenly Arsenal’s failure to win the title this season doesn’t seem all that bad. Amy Lawrence has written here about an achievement not to be sniffed at, as Arsene Wenger prepares to lead the Gunners into the group stage for the 19th consecutive season.

Away from the hustle and bustle of the Premier League, things were wrapped up in the Championship as well as Leagues One and Two at the weekend. Middlesbrough were held to a 1-1 draw by ten-man Brighton at the Riverside, but that was enough to send them back to the top flight after seven years in the second tier. In League One, Burton followed Wigan up to the Championship. For more on Wigan, who have slipped under the radar somewhat over the past year, read James Ducker’s interview with 24-year-old chairman David Sharpe, grandson of Dave Whelan.

Elsewhere, Blackpool dropped into League Two just five years after their relegation from the Premier League, while Oxford United and Bristol Rovers nabbed the last two automatic promotion places to leapfrog the Seasiders. Accrington Stanley, who we wrote about here, will now face Wimbledon in the League Two play-offs after a gut-wrenching 0-0 draw against Stevenage on the final day. 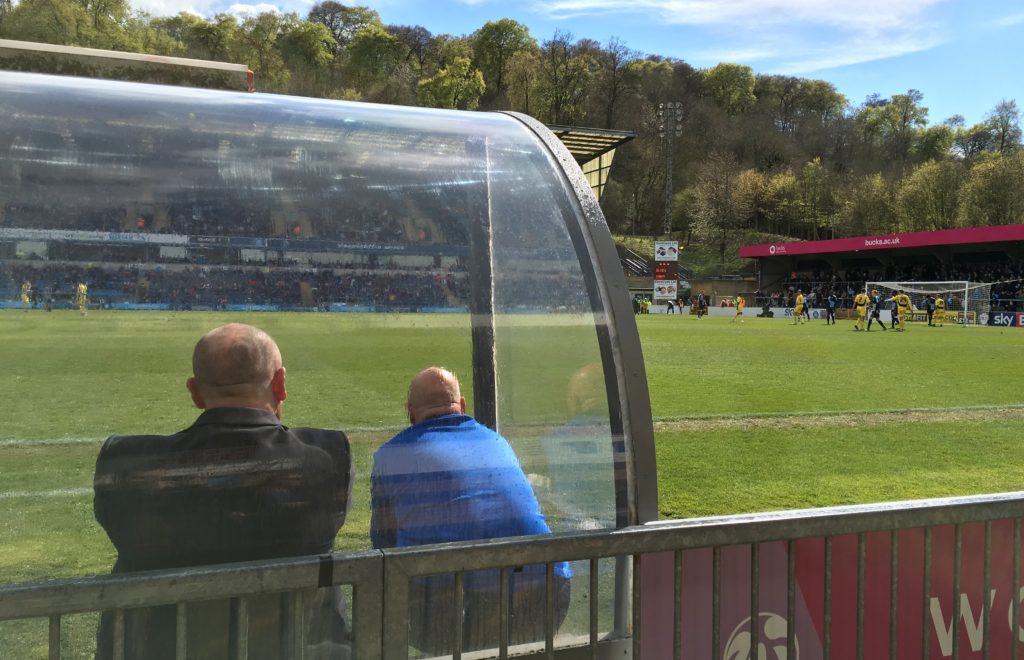 Away from the actual action, the most important thing associated with football at the weekend, but that extends far beyond the game itself, was Daniel Gordon’s Hillsborough documentary, which aired on BBC Two on Sunday evening. It tells the story of the tireless dedication of the families of the victims in their 27-year battle for justice, and is essential viewing. You can watch Hillsborough on iPlayer here.

You wouldn’t really know it’s a huge week looking at Monday’s listings. For anyone intrigued by the next generation of football stars, the UEFA Under-17 Championship continues in Azerbaijan. England, who are bottom of Group C after losing 2-1 to Sweden on matchday one, face France at 17.00 and you can tune in on British Eurosport.

On to Tuesday and, although we have a soft spot for the Hibees, who play Falkirk in the Scottish Premiership Play-Off Semi-Final at 19.45, we have a feeling West Ham v Manchester United is going to steal our attention. United simply have to win this one, otherwise they can wave goodbye to the Champions League next season along with Louis van Gaal. If they do win their last two matches (they host Bournemouth on the final day) and follow up with an FA Cup victory over Crystal Palace in a couple of weeks, it doesn’t look a bad season at all on paper. It’s certainly a damn sight better than Jose Mourinho achieved at Chelsea this year, anyway.

It’s not often that Sunderland v Everton is given top billing above Liverpool v Chelsea on Sky Sports, but the Black Cats’ victory against Chelsea on Saturday means they can secure survival on Wednesday night, relegating Newcastle in the process.

With Everton going through the motions at the moment, and Roberto Martinez just about clinging to his job, it wouldn’t be a surprise if they didn’t even bother to turn up at the Stadium of Light, instead sending a video message of the team collectively shrugging their shoulders as the ‘walking away’ tune from The Incredible Hulk plays in the background.

It's taken 3 years but Everton have finally broken down the most positive man on the planet. https://t.co/Qx6GX1k6Hs

And so to Thursday, and the start of the Football League play-offs. Plymouth were on course for automatic promotion when they were top at Christmas, but a run of two wins in ten matches saw them surrender their place in the top three with defender Peter Hartley saying: “We’re in the play-offs now and we’ve got to take it like men.”

On Friday, Sheffield Wednesday, relegated from the Premier League in 2000, are looking to return to land of infinite riches when they host a rather deflated Brighton side. That, and the rest of the week’s play-off listings, here:

For all this week’s TV listings come right this way.

ONE FROM THE VAULT

We’ve seen a lot of this around recently, so here’s Seb Stafford-Bloor’s Pieces of Hate on hand-crafted banners.

NON-FOOTBALL THING OF THE WEEK

The Briefing: Everything happening in football this week
4.8 (96%) 5 votes