Let’s begin with some news, shall we? Monday’s back pages are filled with a furious Jamie Vardy jabbing his finger at Jon Moss following his red card on Sunday, accompanied by headlines including: ‘VARDY REF RAGE’, ‘VARDY’S REF RANT’, ‘REF RAGE’ (again) and ‘ACCUSED’.

The consensus is that Leicester and England’s man of the moment could face an extended ban for, shall we say, ‘directing his ire’, at poor Mr Moss after he received a second yellow card for diving, fouling Angelo Ogbonna or absolutely sweet fuck all (delete as applicable).

Thankfully for the Foxes, and anyone who has grown a soft spot for Claudio Ranieri this season, Leonardo Ulloa’s late, late penalty rescued a point, leaving them eight above Tottenham who travel to Stoke tonight.

There have been plenty of excellent articles about Leicester’s remarkable campaign, but this, from the Guardian’s Daniel Taylor, is probably the definitive piece.

And if you’re looking for something to read away from the Premier League circus, here’s David Cowlishaw on AFC Fylde, the Paris Saint-Germain of the National League North, on In Bed With Maradona.

TV LISTINGS
For fans of never leaving the house, the good news is that there’s football on every night this week. That’s right: Every. Single. Night. So tell the kids there will be no swimming class on Wednesday, stock up on microwave dinners, and push relationship counselling back another week. What harm can it really do?

We’ll begin at Monday, as is the wont of our Gregorian overlords, and Spurs’ tricky trip to Stoke. Leicester fan Kevin Friend has been dropped as the referee for this one, so he joins the rest of us on the sofa to see if Mauricio Pochettino’s men can claim their first win in four against the Potters.

We’re not sure we can quite believe this, but there is an actual Premier League match on Tuesday this week. Someone has added up all the games and found that Newcastle and Manchester City have played one fewer than everyone else, and so they meet at St. James’ Park at 19.45. Both sides ran out 3-0 victors at the weekend, meaning this could be tasty.

Elsewhere, if you want to get your European Football Expert freak on, there’s Bayern Munich v Werder Bremen in the DFB Pokal semi-final, and Napoli, who have absolutely blown it in Serie A, against Bologna. What we’d give to be 12 years old again watching Giuseppe Signori on Football Italia.

There is simply too much football on Wednesday. First up, it’s the rearranged Merseyside derby at Anfield. A win here would give Roberto Martinez some much-needed breathing space, but Liverpool will be well-rested after making ten changes for their trip to Bournemouth on Sunday.

All the talk in Spain at the moment is how Barcelona have lost their mojo. Last year’s treble winners have seen their lead at the top cut down to goal difference following three successive defeats, and were kicked out of the Champions League by now-level Atletico Madrid.

Luis Enrique, who the Daily Mirror’s Ed Malyon says has been making some curious decisions lately, takes his side to Deportivo La Coruna on Wednesday, with Barca needing any sort of scrappy victory to ease the pressure.

If that still doesn’t tickle your fancy, there’s Hertha Berlin v Borussia Dortmund in the other DFB Pokal semi, which our man Archie Rhind-Tutt will be attending for your reading pleasure.

In Scotland, there’s a dress rehearsal for the Scottish Cup final as newly-promoted Rangers travel to Hibs on the back of a semi-final win against Celtic.

Wednesday: All the football.

What’s this? Top-flight football on a Thursday? You’re shitting us.

It appears more counting has been done because Arsenal, who really just want this season to be over, line up against West Brom at the Emirates on a day that knows Premier League football like I know how to avoid being a disappointment.

The good news for Arsene Wenger is that his boys have an opportunity to show their famed mental strength by ‘bouncing back’ from their draw with Crystal Palace against the Baggies. The bad news is that, yeah, you fucked it.

There’s only one game to watch on Friday, and it’s the Lancashire derby between Preston and promotion-chasing Burnley, who saw striker Andre Gray crowned Championship Player of the Year on Sunday. For fans of feisty encounters and managers with gruff voices, it’s not to be missed.

For all this week’s TV listings – including Saturday’s 5.15pm kick-off between Everton and Manchester United, which we covered here – come right this way.

ONE FROM OUR VAULT
Did you know that Stonewall FC have been going for a quarter of a century? Adam Hurrey did, so he wrote about 25 years of breaking boundaries right here. 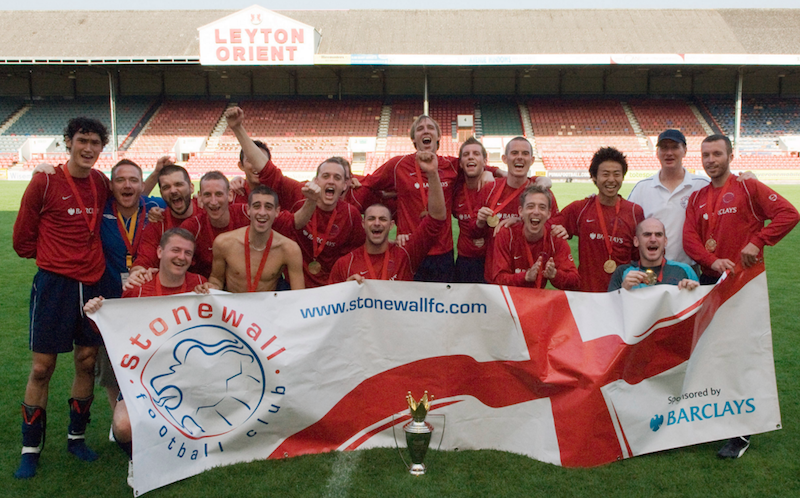 NON-FOOTBALL THING OF THE WEEK
Smiling at strangers.