The Women’s Super League season is about to start – and Arsenal and England’s Alex Scott is revelling in the prime-time TV attention it’s getting…thanks to her drinking her own urine.

That’s not part of the club’s new training regime, mind; she’s one of the contestants on Bear Grylls’s new ITV series Mission Survive.

“I wanted to be taken out of my comfort zone – who is Alex Scott as a person, away from football?” she says. “I’ve been at Arsenal since I was eight, so it gave me the opportunity to experience something different and at the same time still try and represent women’s football in a positive light. It wasn’t just about yeah, I want to go and do it, it was more how can I make this work for women’s football, for Arsenal, and myself and my future career.” 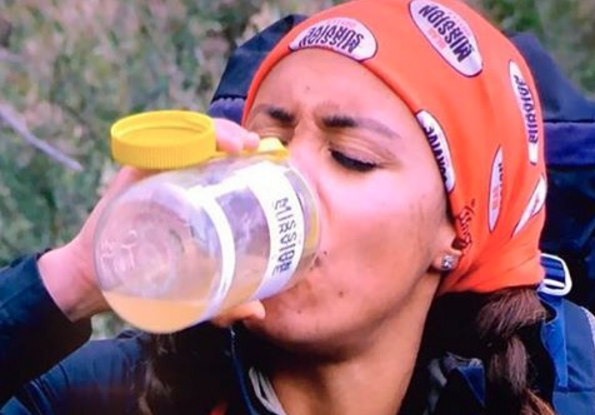 Scott is now 31 and going into another WSL season with the club where she started her career. After Chelsea and Manchester City’s financial investment began to leave the once-dominant Gunners behind, they have finally stepped it up – they have recently opened brand-new facilities at their London Colney training complex devoted just to the women.

Former captain Faye White – the woman who led the team to a quadruple, now working in the club’s marketing department, and one of the faces of a new Budweiser-sponsored competition to showcase the best grassroots goals – admits to conflicting feelings.

“I would have loved to have had this,” she says, before adding: “I had the best at my time, but it’s just good to see the game keep growing.”

In addition to that, Arsenal have added to their squad. Germany international Josephine Henning has joined the Netherlands’ Danielle van der Donk and England legend Fara Williams in signing for them this season. Skipper Scott thinks they will be a force to be reckoned with this season.

“Good players play football,” she says. “I think the main importance is gelling off the field, so once you get that I think it transfers on to the field. We’re in here [at the training complex] every day, the connections are already made, so I think you’ll see [the impact] sooner rather than later.”

Arsenal are not the only club dipping their hands into their pockets. Doncaster Belles – newly promoted to WSL1 – are building their own facilities too in a scheme they’re dubbing “Project Phoenix”.

More to the point, Belles are an independent club; they work happily with Doncaster Rovers, but as they were from their foundation, they fly solo.

“Project Phoenix has been something we knew the club needed from the beginning,” says chairwoman Faye Lygo. “It was glaringly obvious to us there was a total lack of infrastructure. The girls had a nomadic lifestyle: going to one training to another, being bumped off timeslots. It was always there that we needed our own things.”

Belles striker Courtney Sweetman-Kirk is delighted to have the chance to turn full-time professional footballer.

“It’s something that can hopefully make a massive impact in that area of the country and something that girls can look forward to,” she says. “It’s something I didn’t have at that age, thinking being a full-time footballer is a viable career path, but now girls are growing up knowing that’s what they can do, and having Project Phoenix in the area, it’s there on the doorstep, and it’s something to aim towards.”

WSL1 clubs this year have a very peculiar fixtures schedule, with nine teams competing as the league gradually expands. Reading have also made the step up from WSL2, but have switched home – last season playing in Farnborough, this year in Wycombe. Liverpool have dropped back after their nail-biting title defence in 2014 but new coach Scott Rogers is gradually shaping the squad he wants, adding the likes of England’s Siobhan Chamberlain and Alex Greenwood to it. Birmingham came so close to winning the league at the WSL’s outset; since then, due to lack of money, they have found themselves in the chasing pack; a new chief executive, Tim Andrews, has big plans for the club’s future. Notts County, defeated cup finalists twice over in 2015, have lost some of their big names including Canada international Desi Scott; while Sunderland will be hoping that this year, fired by the goals of Beth Mead, they can maintain the kind of form that saw them at the top of the table in the opening weeks of last season.

Chelsea, of course, won the double last year, with Arsenal managing to grab the Continental Cup to prevent a total clean sweep. Manchester City will be expecting their own pieces of silverware with their plethora of riches in the squad, now including the much-touted Kosovare Asllani of Sweden.

Meanwhile, the clubs in WSL2 have perhaps an even tougher task than their higher-placed colleagues. With no high-profile stars to use in promotional activities, they work hard in the community to get a fanbase; but they get less media coverage, less funding, and generally less interest, leaving them ill-prepared should they get the chance of promotion. The nature of the contracts on offer also means a huge amount of player turnover.

Everton will be most confident about their promotion chances this year, having been pipped to the post in 2015. Newbies Sheffield will also be secretly confident after their impressive displays in the WPL Northern Division, but might have suffered from their enforced break since securing promotion last May. They may also be distracted by off-the-field dramas, with former Sunderland manager Mick Mulhern accepting then leaving the post of head coach during the close season.

The team formerly known as Bristol Academy have finally linked up formally with the men’s club Bristol City and changed their name after their limp relegation from WSL1. Brand-new head coaches have been appointed at last season’s bottom three, Millwall Lionesses (Rebecca Sawiuk), Watford (Katie Rowson) and London Bees (David Edmondson); all three will have to work hard to improve their teams’ form.

Aston Villa have added Doncaster winger Nicole Dale to their squad, and she has already said that she hopes her new team will spring a few surprises over the season; Yeovil, famed for their noisy travelling support, finished equal on points with Everton last year and with their plethora of international stars including Wales’s Helen Bleazard, Ellie Curson and Nicola Cousins, they will expect to be up there again this year.

The long-term view is essential, though, for the still-novice WSL. That includes the need for each club to increase their fanbase to enable financial stability – and also to encourage participation, identifying new talent from the grassroots. Looking to the next generations of women’s football has pushed the FA to launch a new ‘Sister Clubs’ initiative, linking girls’ teams with their local WSL clubs, and securing them access to match tickets, coaching sessions and player appearances.

“We want girls to play football and enjoy it for life, and to follow their local club and the role models there to inspire them. There are great benefits to be had on both sides,” says FA head of national competitions Kelly Simmons. “It’s all part of the interest in the WSL, and the increasing profile of the women’s game.”