“Hey Seth, take this.” My teammate hands me a spare shovel and gestures to the pitch.

“One minute,” I reply. My pockets are full of stones. I’ve spent the past 10 minutes picking them up from the pitch. They’re all shapes and sizes, yet no matter how many I collect more seem to appear.

The pitch is more stone than sand and far more sand than grass. To slide tackle is to risk serious injury. And that isn’t the worst of it. There are actual bricks laid into the pitch. A cricket mat is nailed into one of the defensive halves. I make a mental note of where it is to reduce my chances of tripping in the match ahead.

I chuck the stones from my pockets to the sidelines. A handful of monkeys scowl at me, then continue to leap through the trees that surround the pitch. Rickshaws beep their horns incessantly. The sun beats down relentlessly.

Sweat trickles down my brow as I search the pitch with my newly acquired shovel. Each day the farmers bring their cows to our pitch to roam, usually while we’re training. I’ve lost count of the number of times I’ve had to play keep ball with the cows in the 18- yard box, not to mention when they’ve strolled over and knocked into a cone or ball. Now it’s our task to remove their poo. 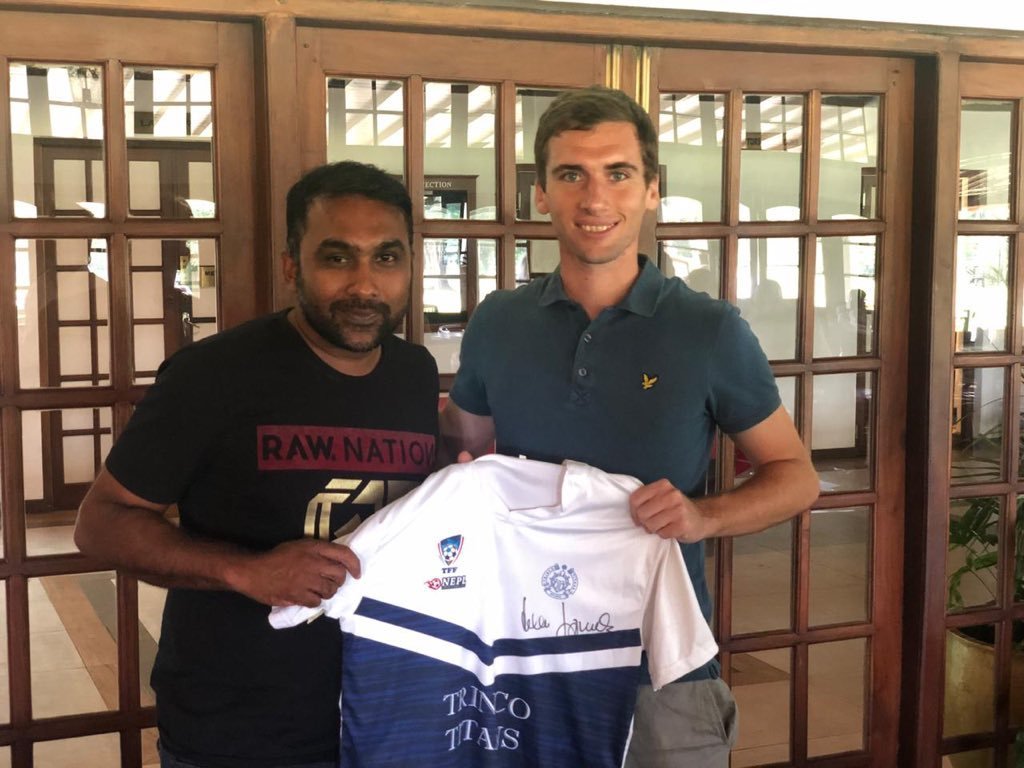 Once that’s done, someone will come with a tractor and attempt to water the pitch. Not to make the ball move more slickly, but to limit the amount of dust that flies up from the surface.

It’s been a surreal few months. From a tweet requesting players to a visa and now this: my first match in the North East Premier League. I’m playing for Trinco Titans, a team owned by cricket legends Mahela Jayawardena and Kumar Sangakarra.

I’ve been in Sri Lanka for two months, training daily for the tournament ahead. The North East Premier League is run by the Tamil Football Federation, set up as a means of repairing the war-torn area through sport. The brutal civil war between the Tamil Tigers and the Sri Lankan government began in 1983 and finished only 10 years ago. Signs of destruction are everywhere.

For my team-mates, this could change everything. For three months every year they put down their fishing nets, paint brushes and frying pans and pick up their boots. They play their hearts out to bring glory to their city. For a lucky few, there may even be a national team call-up.

We line up in the tunnel at 3.30pm, which gives me a chance to get my first look at our opponents, Mannar FC. They come from the other the island. In the past Mannar was joined to India by Adam’s Bridge. A tropical storm changed that and now it lies 20 miles to the east. Every single one of them is staring at me. They don’t know what a white man is doing there. Neither do I. It’s not exactly like I’m earning professional footballer wages here.

Knaan’s Waving Flag plays out over the speakers as we walk out of the tunnel at 3.45pm, 15 minutes after the scheduled kick- off time. Nothing ever happens on time here. Just a handful of people applaud us from the stands. Not to worry. Hundreds more will show up later.

We stand to attention as flags are raised and VIPs are introduced. Then, finally, it’s time. As soon as the referee’s whistle blows I forget everything else around me and focus solely on the game. It soon becomes apparent that Mannar are the better team. They stroke the ball around with soft touches and confident control. They pass. They move. We hit. We hope.

Which isn’t the worst tactic. Our keeper, Ranoos, launches his kicks high into the air, well aware that if they catch a funny bounce they could go anywhere. As legs charge around the pitch I’m occasionally blinded by the dust. The water didn’t do its job. But I do manage to see some of the game. Most importantly, our goal. Sakhti robs an opponent who tries to play out from the back but is thwarted by the pitch. He squares to Dean, who slips in Aflal for a one- on- one. The net ripples. 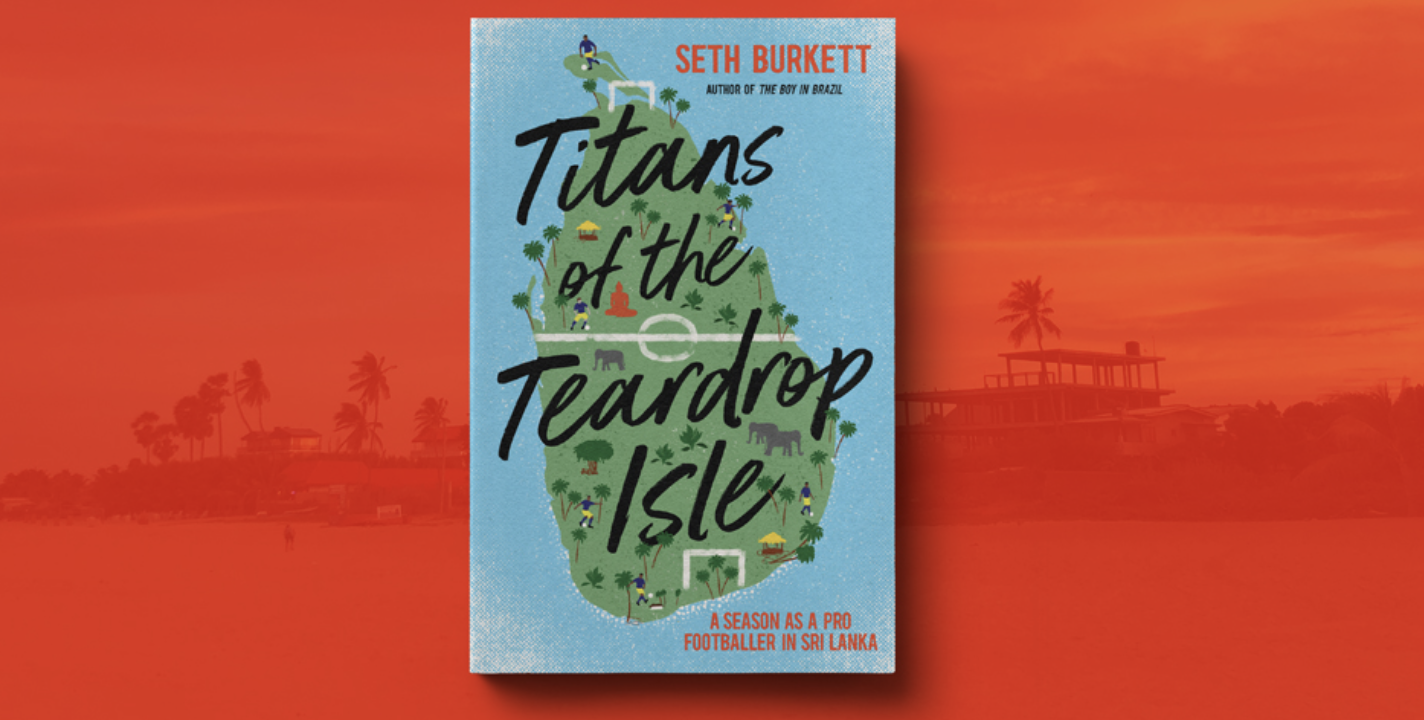 Suddenly I’m charging forward with my arms in the air screaming. My whole body tingles. This is special, magical. The whole team embraces in joy. The rapidly growing crowd goes crazy, blowing horns and blaring music from speakers. They’re dancing and cheering and trying to get involved in the celebration, which isn’t hard seeing as most of them are standing around the touchline rather than sitting in the stands.

Mannar remain calm. They stick to their passing game and it pays off. They soon equalise, then get an outrageous second. The striker is at least 10 yards offside when the ball rebounds wickedly off the goal frame for a tap-in. We appeal to the linesman but he isn’t moved. This is where we need the crowd. In Sri Lanka they stand around the touchline to put pressure on the officials. Yet for some reason they aren’t doing that. The linesman refuses to raise his flag. Just our luck. The one official in Sri Lanka who isn’t corrupt.

The crowd has doubled by the time we come out for the second half. They’re in the shade behind the goal, hugging the touchline and cheering in the stand. When we get the ball in an advanced position they go wild. I even get delirious cheers when I kick the ball out of play to concede a throw in from a dangerous attack.

I’ve never played in front of such an excitable crowd.

So when our 45kg striker with size four feet, Banda, taps home to make it 2- 2 it’s no surprise that they go crazy. And when Banda lashes home an unstoppable thirty yarder everyone loses it. The ball hits the net and he’s running and running and the fans are on the pitch and chasing him and he jumps into our coach’s arms. The squad catches him and we’re all together laughing and smiling and high- fiving.

We don’t deserve the win. But none of that matters when the final whistle blows, Priyan collapses to the floor in joy.  Just 24 hours earlier he’d told me that it was ‘impossible’ that Banda would score. The linesmen sprint to join the referee in the middle. And the crowd sprints to us.

I’m being hugged from all angles, grown men are kissing my forehead and my hands. It’s pure madness. Someone lifts me up. ‘The best player’, they say, ‘amazing,’ ‘very good header’ say others. They really are getting carried away but so am I. I’m buzzing, delirious, joyfully happy.

I don’t yet know this will be the last game we win in Sri Lanka. Within weeks the same fans that are hugging and kissing me will be attempting to kick down our changing room door and attack us after yet another defeat against a rival. That’s all to come. For now I’m going to enjoy the moment. I hope it lasts forever.

Titans of the Teardrop Isle: A Season as a Pro Footballer in Sri Lanka by Seth Burkett is published by Floodlit Dreams.