Sam Allardyce is essentially a guarantor of Premier League survival. It just seems Venky’s didn’t get the memo.

Within weeks of buying Blackburn Rovers in November 2010, the Indian poultry magnates decided it was a good idea to replace Big Sam with a member of his backroom staff who had never held a managerial position before. Spoiler alert: it wasn’t.

It’s a complete mystery where Venky’s got the idea of replacing Allardyce with a client of Jerome Anderson, the agent who had advised them throughout their takeover bid. Steve Kean didn’t care, though. He was delighted to land his first managerial role, albeit in an initial caretaker capacity, and immediately made it known he wouldn’t mind sticking around for a while. Suitably won over by a 1-1 draw with Avram Grant’s West Ham, Venky’s made Kean’s wish a reality nine days after Allardyce’s exit, installing him as manager until the end of the season.

This wasn’t the best way for a new ownership group to win over already-sceptical supporters. Allardyce had done an excellent job in his two years at the helm. Appointed in December 2008 with Rovers second bottom of the table, the relegation-survival expert dragged them clear of danger and secured a 15th-place finish in his first half-season in charge. Blackburn weren’t troubled by relegation fears for the entirety of 2009/10, finishing 10th and reaching the League Cup semi-final.

Blackburn continued in the same vein at the start of the following campaign, rising as high as eighth just days before Allardyce was given the heave-ho. The fans knew little about Venky’s prior to the takeover and were duly alarmed by this early act of boat-rocking. The players were equally dumbfounded by the sacking of one of the Premier League’s safest pairs of hands, as Ryan Nelsen made clear to the BBC.

“I’m obviously extremely shocked, disappointed and absolutely gutted for Sam,” said the long-serving captain, who was soon forced to hand over the armband to Chris Samba. “Not in my wildest dreams did I see this coming. I don’t think any of us saw it coming because of the job he’s done since he’s come to Blackburn. Sam was an incredible man, he had a strong personality, he had short-term and long-term plans and all of a sudden that’s gone now.”

Kean’s first home game ended in defeat as Stoke ran out 2-0 winners at Ewood Park on Boxing Day. But two of their next three fixtures produced 3-1 victories – over West Brom and Liverpool – and Kean was handed a two-and-a-half-year deal after a 2-0 loss to Chelsea.

The mid-season transfer window began with reports Venky’s were targeting Ronaldinho and David Beckham. It ended with the arrivals of Ruben Rochina and Mauro Formica.

Rovers registered another victory against West Brom at the end of January, but that was their last for three months. A run of 10 games without a win sent them tumbling towards the relegation zone, as Kean proved unable to arrest the slide.

They shipped four goals against Wigan and Aston Villa, while Fulham breached Blackburn’s backline three times at Craven Cottage. Kean had inherited a team notoriously difficult to play against and promptly turned wine into water.

Not that Venky’s were particularly dissatisfied. “We have a contract with Steve Kean and he will continue in his present position,” announced co-owner Anuradha Desai in March. “There is no question of the manager being changed.” 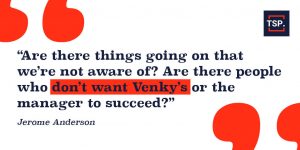 To be fair to Kean, he did oversee an upturn in fortunes just as bums began squeaking. One point clear of the drop zone with four games remaining, Blackburn won two and drew two to secure a 15th-place finish, with a final-day victory over Wolves confirming their Premier League status.

Kean set about reshaping his squad in the summer. Phil Jones was sold to Manchester United, with Benjani, Nikola Kalinic, El Hadji-Diouf and Brett Emerton following him through the exit door. Blackburn beefed up their attack with the additions of Yakubu and David Goodwillie, while defender Scott Dann and midfielder Radosav Petrovic joined from Birmingham and Partizan respectively.

Among the other arrivals was Myles Anderson, who just so happened to be the son of the aforementioned Jerome, Kean’s agent and an adviser to Venky’s. What are the chances? “A late developer,” Kean proudly beamed when discussing the 21-year-old. “Another Chris Smalling.”

Blackburn made a poor start to 2011/12, taking one point from their first four games. A group of supporters staged a protest against Venky’s and Kean before a home game against Arsenal and the subsequent 4-3 victory did little to assuage their concerns about how the club was being run.

The calls for Venky’s to sell up and Kean to resign only grew louder as Blackburn embarked on an eight-game winless streak. Scoring goals wasn’t a problem – Rovers drew a blank just twice during that run – but keeping them out certainly was. Blackburn shipped three each to the might of Newcastle, Norwich, Wigan and Stoke, while Manchester City administered a 4-0 thumping at Ewood Park.

Blackburn slumped to last place in the table as fans and pundits alike pleaded with Venky’s to conduct an urgent review of Kean’s position. The owners heeded that advice and concluded that the under-fire Scot deserved a pay rise. “Yes, there have been discussions about a new contract, but I’ve told the owners this is an inappropriate time to conclude any new contract discussions,” Kean said a week before putting pen to paper.

News of the manager’s improved deal was greeted with dismay by the fan base, who staged a “week of mourning” to mark the death of the club. Kean’s admission he “forfeited” a League Cup quarter-final against Cardiff did little to improve relations between dugout and terraces, as irate supporters demanded a refund for the ticket price and their travel expenses.

A 4-2 win against Swansea temporarily eased the pressure, but three straight defeats returned Blackburn to the foot of the table. Kean remained upbeat, though, insisting his side were in a “false position” and declaring he hadn’t revised his pre-season objective of a top-half finish.

For all the doubts about Kean’s managerial acumen, he had a useful knack of pulling results out of the bag when he needed them most. In the context of the two teams’ form – Manchester United were the reigning champions and had won eight of their last nine games – a 3-2 victory at Old Trafford on New Year’s Eve must go down as one of the biggest shocks in Premier League history.
Kean’s joy was short-lived. A 2-0 home defeat by Stoke returned Blackburn to rock-bottom. The fans continued to make their displeasure known and Jack Straw, the local MP, called for a change of manager, but the anti-Venky’s, anti-Kean sentiment wasn’t quite unanimous. Jerome Anderson, for one, couldn’t see what all the fuss was about.

“Are there things going on that we’re not aware of? Are there groups of people who say they’re supporters, but who really don’t want Venky’s to succeed for whatever reason and don’t want the manager to succeed?” Anderson mused.

“With normal fans, all you want to do is support your manager and team. What I think the world of football can’t understand is where this is coming from. It does seem to be well organised, from people who say they are supporters,” he added, stopping short of blaming the CIA, the Kremlin or the dark forces that did for Richard Keys.

Kean showed admirable dignity in the face of the protests. It can’t be easy to conduct your work in such circumstances and the fact he felt the need to hire a personal bodyguard didn’t reflect well on anyone. Then again, it was hard to blame Blackburn fans for railing against their club’s self-inflicted decline. They had been solidly mid-table when Allardyce was the manager and the Jack Walker Trust was in charge of the purse strings. A little over 12 months on and they were staring relegation in the face.

Kean was a convenient scapegoat for the Venky’s, who didn’t have to face the fans’ wrath from the technical area or answer tough questions in press conferences. Their early pledge to lead Rovers into the Champions League looked more and more laughable with each passing week. The signings made little to no impact, while Myles Anderson made no appearances.

The farcical mismanagement was best exemplified by the case of Michel Salgado, a two-time Champions League winner who was bombed out of the squad because he was on the verge of triggering a clause for a new deal the club couldn’t afford. The January sale of Samba hardly helped Blackburn’s battle against relegation either.

A 7-1 loss to Arsenal in early February marked a new low, but Rovers rallied to win three of their next five games and pull clear of the bottom three. Yakubu scored the victory-sealing goal in a 2-0 win over Sunderland, one of 18 strikes the Nigerian contributed that season. If it wasn’t for him, Blackburn would have been in even more bother.

Kean felt Rovers had turned a corner with that five-game run, but it was into a cul-de-sac. Their next five outings yielded no points.

The team’s mentality wasn’t so much never-say-die as at-least-make-it-quick. Despite rallying to beat Norwich 2-0 in Lancashire, Kean’s side lost their next game to Tottenham. Needing a victory in their penultimate fixture against Wigan, Blackburn fell to the occasion. A 1-0 home defeat confirmed their relegation to the Championship.

A few days later, a video was released showing Kean criticising Allardyce in a conversation with Blackburn supporters the previous summer. Kean alleged his predecessor had been sacked by Venky’s because he was a “f***ing crook”. Allardyce initiated legal proceedings and Kean was later forced to pay damages.

Yet despite everything, Kean remained in the hot seat. “These are challenging times for the club and the owners, but I believe Venky’s are 100 per cent the right owners. I am not going anywhere and neither are the owners,” the Scot said after the Wigan defeat, not quite reading the room.

Kean received substantial backing in the summer, signing Jordan Rhodes for £8m alongside the experienced duo of Danny Murphy and Dickson Etuhu. Blackburn made a positive start, winning four and drawing two of their first six games, but a 2-1 home defeat to Middlesbrough in September proved to be Kean’s last stand. He reluctantly resigned on the eve of Rovers’ trip to Charlton, admitting his position had become untenable but claiming he was being “forced out”. Kean had reportedly survived the chop a few days earlier only after his wife had called co-owner Anuradha Desai and pleaded for a stay of execution.

Blackburn would employ another four managers (including caretakers) that season. They were relegated to League One in 2017 but have since bounced back to the Championship, while Venky’s are celebrating their 10-year anniversary at the helm.

As for Kean, he spent four years in Brunei, naturally – taking charge of club side DPMM and managing the national team for a brief spell in 2014. In October he was appointed as Melbourne Victory’s new assistant manager, having previously served as director of recruitment at Greek Super League side OFI Crete. Fortunately for them, Myles Anderson was otherwise engaged.