Despite watching Eintracht Frankfurt lose 3-0 away to Bayer Leverkusen, Fredi Bobic wasn’t downhearted. “I think their budget is three times larger than ours,” he shrugs.

Bobic became chairman at Eintracht in June 2016, just after they had avoided the drop via the Bundesliga relegation play-off. Wind forward to when The Set Pieces caught up with him at the BayArena in February 2017 and Eintracht were third in the Bundesliga, dreaming of qualifying for the Champions League.

He was happy to talk about their season to date, remarking that reaching Europe’s elite competition would be the equivalent to winning the Champions League for Frankfurt.

Bobic was happiest, though, when talking about his time with Sam Allardyce at Bolton Wanderers more than 15 years ago, back when the former England boss was forging his reputation as a Premier League survival specialist.

For Bobic, Allardyce was a “typical, old-fashioned English coach.” Or just simply: “Gaffer.”

“It was a great time,” he recalls. “It was the first year after promotion and we did well. We were fighting against relegation but we did it. We stayed in the league. Djorkaeff, Tøfting, all these guys, Bruno N’Gotty, the young Kevin Nolan. This was a fantastic team.”

‘Fantastic’ may sound a bit much given that the club finished 16th in the 2001/2002 season but Bobic’s assertion was borne out in the years after he left the club. Allardyce went on to lead Bolton to four successive top-half finishes, including two seasons of European football that even brought a 2-2 draw against Bayern Munich at the Allianz Arena.

Allardyce’s reputation may always be tarnished by his England sacking, but fighting off relegation on 12 different occasions with various clubs, along with leading Bolton and West Ham to promotion, is still a mightily impressive record.

His teams have never been as aesthetically pleasing as that record, of course. Jose Mourinho famously once described Allardyce’s West Ham side as playing “19th century football”, while Bobic noted back in 2002 that his Bolton team were “not big on tactics” instead preferring “quite simple long balls”.

It undoubtedly got Allardyce results, but the now not-so-young Kevin Nolan instead credited his former boss’s success to how he handles players.

“Far more love him than hate him,” said Nolan. “When you play for him – and I know some fans see him in a bad light – but when you play for him, you just want to make sure you do your very best. He makes sure you go out on the pitch feeling like a world-beater.”

Bobic was also a fan of Allardyce’s style and found he was surprisingly efficient at conveying his message to the players.

“He didn’t make big speeches in the changing room before the game. Sometimes very easy, very short,” he says.

“This was funny because in Germany sometimes, they [the head coaches] are talking for about 15 to 20 minutes before the game.” 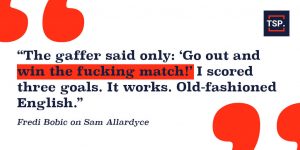 Bobic fondly remembers a particular example before a crunch match against Ipswich in April 2002 – the very epitome of a six-pointer.

It was 17th against 18th, with Ipswich three points behind Bolton as they headed to the Reebok. George Burley’s side boasted a better goal difference, however, meaning a win would lift them out of the bottom three with just four games left to play.

So what did Big Sam do? Well, Bobic says he only needed seven words before the game. “The gaffer said only: ‘Go out and win the fucking match!’ I scored three goals. It works. Old-fashioned English.” Bolton won the game 4-1 and were 4-0 up by half time.

If Allardyce’s dressing-room demeanour was different to what Bobic had experienced before, he was still the knight in shining armour to the striker’s ailing career.

Despite 86 Bundesliga goals to his name, plus a couple in the Champions League, the 30-year-old’s reputation in Germany had faded. Gone were the days of the legendary magisches Dreieck (the magic triangle), which Bobic had formed with Krassimir Balakov and Giovane Elber at Stuttgart in the mid-90s.

People still asked Bobic about that Stuttgart side when he was in Bolton, even if he points out that at the time in Britain, “there was no Bundesliga on your fantastic island”.

Frustration was his overwhelming emotion in January 2002. Not only had Bobic failed to add to his 19 Germany appearances in nearly four years, he had played in only three Bundesliga matches for Borussia Dortmund that season. Moving to Bolton offered the opportunity for a fresh start.

“To work with Sam Allardyce… it brought me the joy back of the game and also the passion of the game because I struggled a little bit before I went to Bolton,” he explains.

Four goals in 16 appearances for Bolton doesn’t represent the most prolific season of his career by any means, but Bobic’s three strikes against Ipswich secured him the honour of being the only Bolton player to have scored a Premier League hat-trick. A record that stands to this day.

The spell in England’s north-west revived his career. Ten months after making the loan move to Bolton, the striker was back in the Bundesliga with Hannover 96 and he had also returned to the German national team, scoring on his return against the Netherlands.

“That’s why I was very thankful for that time [at Bolton],” says Bobic. “I would have liked to stay but I was too expensive I think.”

While Big Sam has now been out of work for more than two years since departing Everton in the summer of 2018, his record as a survival specialist perseveres. Even as the new Premier League season unfolds, it’s already clear some sides would benefit from Allardyce’s grit and defensive organisation in the dugout in their bid to avoid relegation.

This article was originally published on 2 March 2017.