“He is a truly remarkable talent. It’s rare that sportsmen can act, but Ally McCoist is a natural. He has an Olivier-type quality” – Kevin Costner.

Football films have one crucial dilemma to solve before a single ball is kicked, one that – on existing evidence of the genre – doesn’t seem to have a definitive answer. Quite simply: do you hire a footballer who can act, or an actor who can play football?

Some films opt for the latter, and hope that their leading man’s (or Keira Knightley’s) footballing muscle memory extends back to their playground days. When Saturday Comes employed the distinctly 7/10 talents of Sean Bean to reasonable effect, while the Goal! Trilogy struggled to convince you that Kuno Becker’s willing-but-unable Santiago Muñez had even seen a football, let alone curled one in from 35 yards. Other productions, like the stellar wartime ensemble romp that is Escape to Victory, cover all bases by partnering unsteady thespians with wooden ex-pros.

Sometimes, though, a casting director stumbles across a man who can do both. Step forward Rangers legend, two-time European Golden Boot winner and endearing 90s scamp Alistair Murdoch McCoist.

Lest we forget, McCoist – “Coisty” if you prefer – was an extraordinary purveyor of banter in its classic, pre-Twitter form. His eleven-year reign as team captain on A Question of Sport initiated a turnover of no fewer than three captains on the other side, as John Parrott, Frankie Dettori and Matt Dawson clowned around in vain to match McCoist’s endlessly forgivable cheek. If he was the Sir Alex Ferguson of light sports entertainment, then his successor – gurning cricket buffoon Phil Tufnell – is surely his David Moyes.

Unfortunately, that happy-go-lucky exterior was sacrificed by the unforgiving task of having to become Rangers manager, where his abiding image is not of grinning through some light innuendo with Sue Barker but of whispering something apparently awful into the ear of Neil Lennon at Celtic Park.

Anyway, back to the distinctly non-beleaguered McCoist of the late 1990s, and this is where it gets a little weird. Academy Award winner Robert Duvall – a tireless sports enthusiast who nevertheless thought Any Given Sunday was “an abomination” – decided he wanted to make a sports film. A football film.

Upon meeting McCoist to discuss the part, Duvall’s enthusiasm got the better of him and the footballer leapt to the front of the queue ahead of a gladiator.

“[McCoist was] 80 times better for this part than [original choice] Russell Crowe, and more charismatic…Olivier could never kick a ball, but McCoist is a very natural actor.”

So, here we are: Robert Duvall comparing Ally McCoist to Laurence Olivier, and we haven’t even got to Michael Keaton’s role yet. But let’s set the scene first.

Duvall’s character is Gordon McCloud – manager of fictional second division side Kilnockie, and who sits somewhere on the Dour Scottish Football Manager spectrum between Walter Smith and Jock Stone from the Hurricanes. That much is clear within the first five seconds of his opening scene, but what isn’t quite as easy to explain is why he’s discussing the club’s transfer policy with Bruce Wayne.

Keaton, it emerges, is the wild-dreaming, gum-chewing American owner of Kilnockie FC – possibly the sort who ends up on a double-spread “Clubs in Crisis” feature in When Saturday Comes magazine in real life – who wants to add a star name to McCloud’s humble squad.

“You know why? Simple – he’s really good. He can score, play defence [is he Paul Warhurst?] he can see and anticipate the field, he’s won two Golden Boots. This guy’s gonna give us the punch we need, Gordon, to make a run at a cup. Don’t you wanna win a CUP?!?!?!”

We then get our first glimpse of our hero. He’s flash – we know this because he’s wearing a suit jacket with a T-shirt, the ultimate 90s on-screen indication of success, and driving a convertible with white leather seats.

McCoist rolls into town under a homemade banner to welcome his Jackie McQuillan to little, old Kilnockie. As fictional footballer names go, it’s solid enough – they’re always a Jimmy, a Johnny, anything beginning with J – but it sounds more Celtic than Rangers. Surely they wouldn’t write McCoist’s character as a former Celti….ah. Oh dear.

Yes, Ally McCoist – 355 goals for Rangers – is now a Celtic legend, being brought back north of the border after a spell with Arsenal to help raise the profile of Kilnockie. All that library footage of goalscoring glee over 15 years in a Rangers shirt is rendered useless – until that, is someone came up with the idea of turning the blue into green. 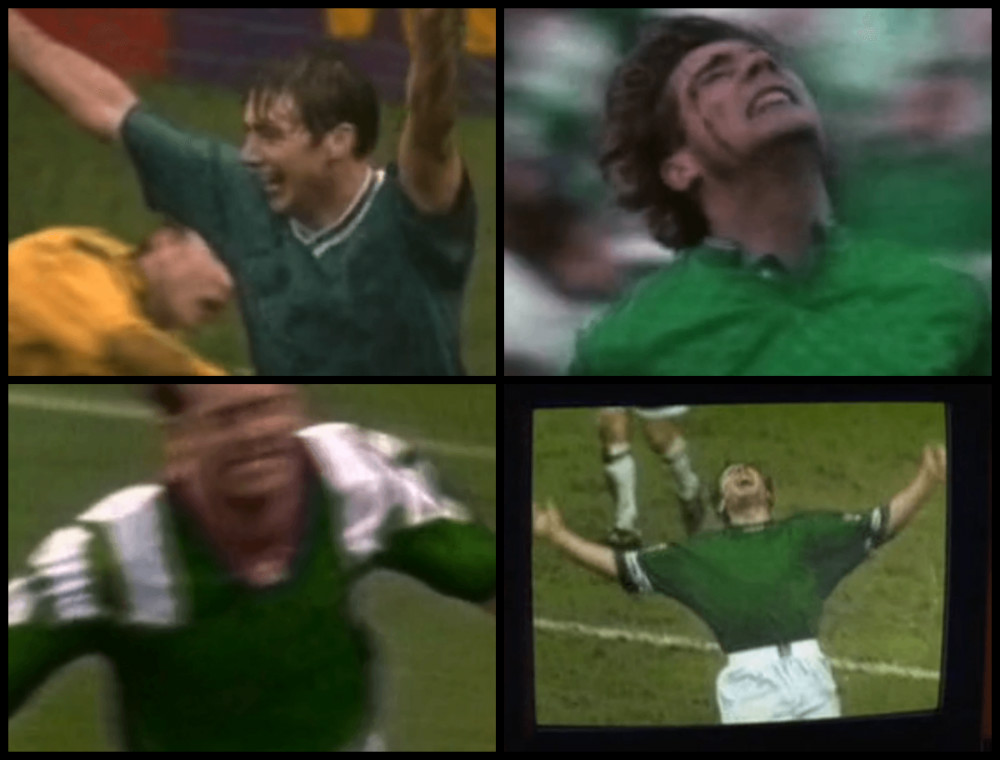 “Gordon…” – Keaton’s not done with their meeting – “…I’m thinking about moving this team to Dublin.” Not content with stoking the sectarian fires, this film is now making a prescient point about uprooting football clubs and turning them into franchises!

Perhaps there are more layers to this story than its tagline of “sometimes in life you only have one chance to win” suggests. After all, Duvall’s research had taken him to Ibrox where he’d proudly (but, one assumes, unwittingly) held up an innocuous scarf. 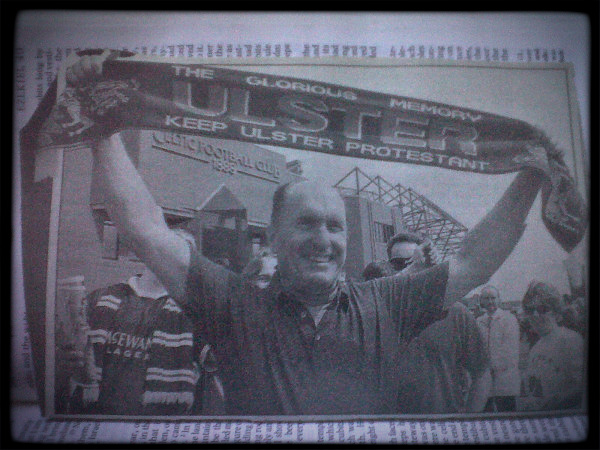 The football action finally gets under way, with a chaotic Kilnockie training session featuring, for some reason, an agile American back-up goalkeeper (played by proper actor Cole Hauser) and a distinctly Continental-looking figure – later identified as “Diego” – who makes a quick exit because he “doesn’t like the weather”.

McQuillan turns up late for his first training session, to a frosty reception from McCloud – who, by the way, is the father of Jackie’s estranged wife, confirming this is the most ill-advised transfer in football history. The narrative arc of that family affair is even more reassuringly predictable as the on-field action.

McQuillan’s Kilnockie debut comes against Dumbarton in the last 16 of the Scottish Cup – there’s no mention of how the minnows had progressed that far, but no matter – and, despite co-commentator Andy Gray suggesting he looks a little “heavy-legged”, our man heads ‘Knockie in front from an inswinging corner by, obviously, Owen Coyle.

“DADDY SCORED YEAAAHHHHH!” booms an alarmingly husky-voiced Jackie Jr (yep, there’s a kid involved too, just to complicate things further) and Michael Keaton punches the air from his VIP vantage point: Kilnockie are into the quarter-finals.

Queen of the South aren’t exactly the money-spinning draw, but Michael Keaton switches the tie to their ground anyway – another tidy little touch of realism – where McQuillan bags a hat-trick…

…but then gets himself sent off and suspended for the semi-final.

With family tensions easing, a McQuillan-less Kilnockie see off top-flight Kilmarnock (McCoist’s real-life club at that point) to set up a fairytale final against Rangers at Hampden. McQuillan, of course, has to make his way there via a police cell after defending his wife from two Rangers fans in the team hotel – solving a century or so of Old Firm unpleasantness once and for all, no doubt – so has to settle for a place on the bench.

His last-minute equaliser – a mundane eight-yard header, surprisingly, rather than the heroic bicycle kick in which these films usually indulge – sets us on the way to the same ending we’ve seen a thousand times before. Extra time is ignored, quite rightly, and we go straight to the penalty shootout. The goalkeeping America-friendly sub-plot has his moment by keeping Kilnockie in it with a save but, to complete the novel anti-climax, McQuillan fails from the spot and the Cup goes to Rangers.

Once you look past the unorthodox peripheral casting, Duvall’s accent hanging on for dear life and the low-budget flashbacks of Ally McCoist in Celtic green, you’re left with a perfectly standard football film. Although not, in fact, the only football film to have combined family strife with the Old Firm, thanks to Gerard Butler and the distinctly glossier Playing For Keeps (2012):

Where A Shot at Glory does triumph, though, is with its frontman. No other chief protagonist of a football film has ever managed to handle both tidy link-up play and a PG-12 adulterous sex scene with such aplomb, and for that McCoist should be even more proud.