David Beckham and Jermaine Pennant are, somewhat remarkably, the third and second most recent Englishmen to play in Spain’s top flight.

While Beckham’s stay with Real Madrid between 2003 and 2007 needs no summary, Pennant’s one season with Zaragoza in the 2009/10 season ended with a whimper after the former Liverpool winger and Champions League finalist turned up late for training one too many times.

As a coda to the bizarre season, he supposedly forgot about his Porsche when he moved back to England with Stoke City, leaving it to rack up parking tickets at Zaragoza train station for several months.

The most recent Englishman to play in La Liga is still out in Spain, still playing and still has dreams of making the top tier once again.

“Obviously, being the only Englishman in the Spanish league is kind of attractive, innit?”

Charlie I’Anson, the Luton-born 24-year-old centre back, is one of a kind. He is the only English professional currently playing in Spain’s top two tiers (Connor Ruane is in the third with Hercules) and one of precious few to have played more than a solitary campaign in a non-English speaking country.

I’Anson – whose two La Liga appearances came at Elche in the 2013/14 campaign – is now at Granada, the Segunda Division side who hit the headlines in the UK last season when they hired Tony Adams.

The defender is now seeking promotion once again, after a somewhat mixed spell since his top-flight debut in front of 30,000 people.

I’Anson and his family moved to Benalmadena, a town 20 kilometres west of Malaga, when he was seven years old in search of a better standard of life. However, rather than navigate an entirely British existence, as some choose to do in Andalusia’s coastal resorts, Charlie and his brother were thrust into the local school system and became bilingual.

“I’m happy at the moment in Spain. Lifestyle is good, football is good,” he says, before we get on to whether he considers himself more of an English or a Spanish footballer.

“I’ve got to say I’m mixed. I like to play football and come out from the back, but my strongest points are defending the ball, as an English defender would really.” 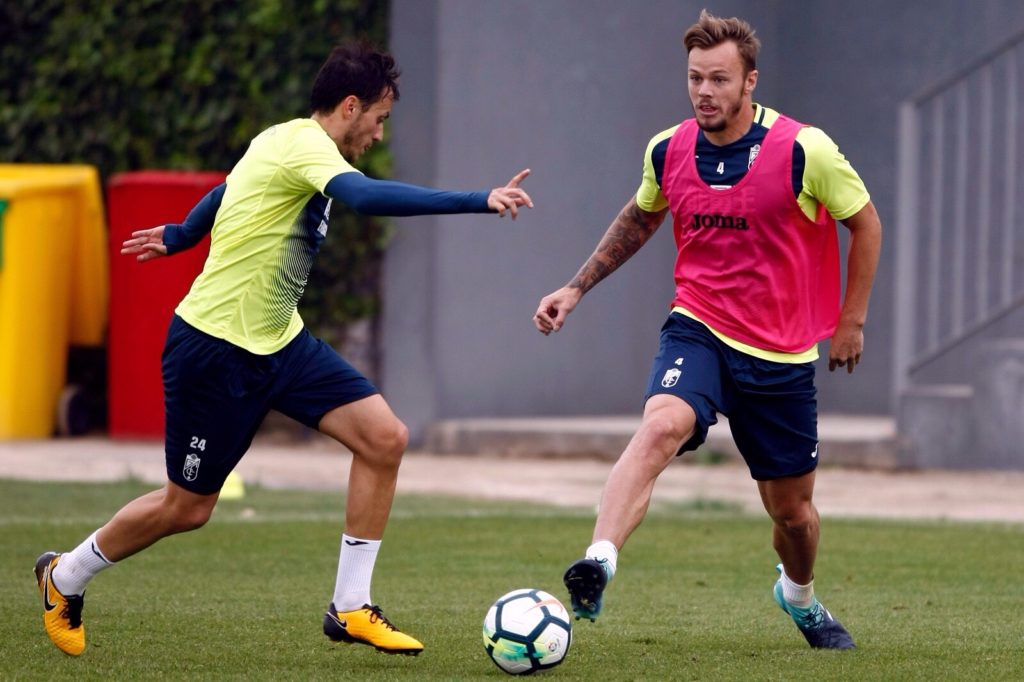 He still has a London accent – the only time he refers to a team as ‘we’ during our conversation is when the subject matter drifts to his beloved Tottenham Hotspur – but there are Spanish inflections in his speech. He talks about ‘the selection’ instead of the national team and is momentarily unsure when I refer to La Liga, “do you mean the first division, or…?”

Despite his preference for defending English style, I’Anson is a product of the Spanish youth system and played for local team Atletico Benamiel alongside one of Benalmadena’s most famous sons – one Isco Alarcón.

He chuckles at the memory: “He was a bit chubbier than what he is now!

“My brother played most years beside him. I think I played one year with him. He was training with groups two years older from a very young age.

“He’s always been the highest level but to be honest he worked more than anyone else. Even when training finished he was still kicking a ball, messing around.”

At 16, Charlie – as the back of his shirt simply reads these days – was spotted while playing for Malaga province in a regional tournament and earned a trial with Nottingham Forest. While he didn’t end up signing on at the City Ground, he did make the move back to Britain to begin his professional career with Grimsby Town.

As a 17-year-old, he capped a first-team debut with a goal in a 2–0 win in the Conference against Mansfield Town on 19 April 2011, but just over a year later he decided to head back to Spain.

“Not a lot of people understood why I left Grimsby. I had a pro contract and I came back to Spain without a club.

“I knew I’d have a good chance but even when I came back to Spain, but no-one knew who I was or where I played because it was in the Conference Premier. So I had to start again.”

After several trials I’Anson’s chance came at Elche CF. Impressing for the reserves and helping them seal promotion, he was included in the first team squad as they returned to La Liga under manager Fran Escriba for the first time since 1978.

While he made just two first team starts for Elche in the 2013/14 campaign, those outings as a 21-year-old rank above all else among his personal achievements.

“That’s definitely the best period of my career. I played at the highest level with good players, quick pace.”

On a sunny October afternoon, he marked his top-flight debut with a 2-1 win over Espanyol at Elche’s home ground, Estadio Manuel Martínez Valero.

“I was marking Sergio Garcia as the striker on the right. He was the best player I’ve ever played against. He’s got God knows how many goals in the first division, he’s played in the selection (the Spanish national team) and he’s been at big, big clubs, so that was unbelievable.”

Garcia didn’t get one of his 59 La Liga goals that day, but despite I’Anson’s promising start – as many young footballers find out – the upward trajectory didn’t continue without its hiccups.

Elche hit serious financial difficulties going into their second season in the top flight, and as a youngster who happened to be recovering from an injury, I’Anson was deemed surplus to requirement from the first team and shipped out on loan to Alcorcon and Real Oviedo. At the end of 2014/15, Elche became the first team in history to be relegated from the top flight for economic reasons.

“I had very good friends at the club, players, even with the fans it was awesome. It was very sad to leave the club the way I did.”

While he might have stayed longer had circumstances been different, I’Anson admits he didn’t like how he was treated after putting in the years helping the club climb the divisions and decided to leave for an new opportunity with Valencia Mestalla.

He signed on at Valencia and went straight into the B team in the summer of 2015 – but it was the arrival of two other Englishmen at the club that caught the attention of the media.

In December, Manchester United legend Gary Neville – thanks to owner Peter Lim’s Salford connections – took charge of the first team, with his brother Phil serving as coach, for what proved to be an ill-fated spell that lasted just 16 games and ended in ridicule.

“I think it wasn’t the right time,” says I’Anson, adding that he didn’t have much interaction with first team affairs. “I never spoke to them and it’s a shame because I think they didn’t know that I was there, because I think they would have at least come and spoken to me.”

This season, as he enters his peak years, I’Anson is back in Andalusia having signed a one year deal with Granada CF – a little more than an hour from his family home – and is enjoying first team football and a shot at facing the world’s best strikers once more.

“Promotion is the main target, definitely. We’ve got no other options. The fan base, the club, everyone knows what the players have come in for and that’s what we got to do.

“It’s a big change from what I’ve been at in other B teams or first teams. The pressure is high.

Much like with the Nevilles at Valencia, I’Anson crossed paths with another Englishman at Granada in his latest career move. Another Englishman whose reputation has taken something of a battering.

“No, I haven’t met Tony Adams yet,” he says. “Positioning wise, I wasn’t here when he was the manager and now he’s working at the club, but he’s not around at the moment.

“They [Neville and Adams] had the clubs at the wrong time. They were asking them to do a miracle really, at Valencia and at Granada.”

Despite the risks involved, I’Anson believes more players and coaches should embrace the challenge of working abroad. While he had the benefit of being immersed from a very young age, he rejects the idea that an aversion to learning languages is hindering English professionals in making the jump overseas.

“Having a few different English players and styles coming to this level would make the Spanish game a lot better. The language, for me, they can’t say that’s a problem because most people speak English.

“Out here they have a lot of facilities to learn it very quickly. Managers or even a coach will speak English and they set up classes. It’s not very hard to learn another language. There’s probably four people who can speak fluent English at the club.”

I’Anson comes across like many other jobbing footballers playing from contract to contract – he just happens to be doing so in an environment unusual for someone of his nationality.

“For me at the end of the day, wherever I go, it’s not about the language, it’s about the ball, it’s your job and that’s what you got to do. You never know what happens in football, I’m not shutting my door to anywhere.”

Charlie I’Anson: The Englishman Seeking Another Shot at La Liga with Granada
4.9 (98%) 20 votes