Sunday 6 December 2009. Just before 7pm at the Maracanã Stadium, Rio de Janeiro’s iconic concrete bowl and celebrations are just kicking off. Flamengo, the biggest club in Brazil, who count their support upward of 40 million, have just secured their first league title in close to two decades after a hard fought 2-1 win against Grêmio.

At long last, the man most synonymous with this latest domestic triumph gets his hands on the trophy and thrusts the silver souvenir skywards, a wide, shining grin stretching from ear to ear.

The man who has been written off, but has dragged himself back to relevance has now been playing at his boyhood club only a matter of months. The personification of the complete, modern-day centre forward, who topped the scoring charts with 19 goals, is now surely on his way back to the pinnacle of club and international football. Adriano. O Imperador, to those in Brazil.

But in many ways, that warm December afternoon in 2009 was the last time we saw anything like the real Adriano grace a football pitch. At the age of 27, his career was as good as over, a mixture of personal tragedy and a lack of emotional wellbeing derailing the frightening early promise.

Adriano Leite Ribeiro was born on 17 February 1982. Strong, powerful, quick, excellent in the air and in possession of possibly the most powerful left foot in the game at the time, the Rio native was gifted with all the attributes to mark out a glorious career in the game.

In terms of playing style he was most commonly compared to the greatest striker of the modern era: another Rio-born star, Ronaldo. Gilmar Ferreira, a sports columnist with Rio daily, Extra, firmly believes Adriano had the characteristics to go all the way to the very top. “He had skill, technique and strength. But from his father’s death [in 2004] he started to lose his way.”

It is the death of his father, Mirinho, in 2004 that is widely attributed as the main factor in the then-Inter Milan player’s gradual downfall inside the white lines. One month after lifting the Copa América with Brazil in 2004, Mirinho passed away from a heart attack. The 22-year-old had lost his rock, his focal point.

At that continental tournament, which saw the Selecao crowned champions, he was the leading scorer with seven goals, including a 93rd minute equaliser in the final against Argentina to force a penalty shoot-out.

History would repeat itself at the FIFA Confederations Cup 12 months later. Brazil, champions. Adriano, top scorer. It looked to the world that the Emperor was more than ready and able to fill the boots soon to be left behind by the departing Ronaldo, despite familial heartache.

Brazil went into the 2006 FIFA World Cup in Germany as the favourites, thanks in no small part to their wealth of attacking options: Ronaldo, Adriano, Ronaldinho Gaúcho, Kaká and Robinho.

But according to Ferreira, the year in between the Confederations and World Cups had already marked the start of Adriano’s decline at the top level.

“His mental state was worsening with each passing year,” the journalist adds. “So much so that in 2006, he already wasn’t the same player we saw in 2005. With his emotional state worsening. Adriano spent the remainder of his career wavering between euphoria and depression.”

Until 2006, Adriano’s goalscoring record remained hugely impressive. During his time in Italy with Parma and Inter, the forward racked up 91 goals in 180 games at a rate of a goal every other match.

But his time at the top table of European club football had drawn to a premature close before he’d even turned 25. Liberated by Inter to clear his head in late 2006, the striker was photographed at baile funks surrounded by women, cigarettes and alcohol. The focus that had seen him reach the top so quickly was dissipating.

A fruitless loan spell at São Paulo followed and it wasn’t until he arrived at Flamengo, in May 2009, that the final act of what could have been one of the glittering careers of the 21st century, began in earnest. And as Ferreira recalls, it was a move by the Rio giants that split opinion at the time.

“There remained several doubts that his psychological strength could return,” says Ferreira. “Others thought Adriano only returned to Brazil to be close to his friends in Complexo do Alemão [the favela complex where he was raised] and where he always stayed during his holiday periods in Brazil. His time at São Paulo had been dominated by his actions off the pitch.”

Would Rio provide the same distractions, in a city where he felt comfortable and knew more people? It was make or break for the centre forward.

Adriano hit the ground running. With the midfield dictated by Serbian veteran Dejan Petkovic, the attacker was offered various opportunities to find the back of the net, something he managed with clinical regularity despite Flamengo’s slow start to that year’s league campaign.

On his first start for the club, he scored one of the goals in a 2-1 win against Athletico Paranaense. His subsequent celebration has gone down in Brazilian football folklore as he ripped off his shirt, David Ginola-esque, to reveal a ripped physique and silence those critics who had suggested – with justification, admittedly – that a liking for the nightlife and a heavy consumption of alcohol had left the once trim player out of shape upon his return to his homeland.

But it was three games later he truly announced his arrival at Flamengo and suggested that he still had much to offer the sport. In a 4-0 win over Internacional at the Maracanã, Adriano bagged a hat-trick, cementing his place in the hearts of the club’s vociferous and ferocious support. This wasn’t a man passing through on his way to a better offer. Adriano had shown that he was back in shape and, most importantly, firing on all cylinders, with 19 goals ensuring the Rubro-Negro beat Internacional to the league title by just two points.

The next big question was whether he could then make the step back up to European club football having transferred to AS Roma. Ahead of the 2010 FIFA World Cup in South Africa, this was a chance to show what he still had to offer the national side.

Ferreira explains what he could have brought to the 23-man squad.

“Adriano is left footed and strong – there are few in the world with those characteristics,” he adds. “It’s why Dunga called him up [to the Brazil squad]. But he ended up giving up on him as he no longer believed in Adriano’s capability to focus on the group objective.

“He thought football had become an obligation for Adriano, something the player did nothing about to disprove. When he wasn’t called up to the South Africa World Cup squad, it appeared to be a relief for Adriano.”

A brief spell at Corinthians saw him score just one goal in an ill-fated spell, but former teammate Danilo speaks of the character behind the myth. 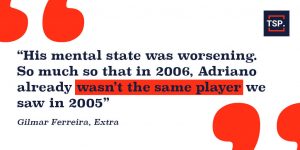 “He got on well with players and it was a privilege to have played with such a great player,” recalls his compatriot.

“He always helped the youngsters in the academy and was well liked by everyone in the group. He adapted quickly to the club and was an example. People looked at him differently because of everything he had achieved in the game.”

According to Danilo, could he have been the best in the world in his position?

“Without a doubt. He could have been the best in the world. What he achieved at Flamengo and abroad showed that he had the ability to go all the way. Strong and an excellent finisher, he had the potential to be the best.”

The raw talent was there. The jaw dropping goals are eternalised on YouTube, the sheer brute strength mixed with clinical finishing that made him one of the most sought over talents on the planet.

Yet the emotional support the player needed during harrowing times during his career was severely lacking. It was football’s loss. Adriano gave glimpses of what could have been. Flamengo could have been the start of the second act. Instead, it was the final farewell.