Late at night in 2012, programmer Simon Read was awakened by his baby son. Like sleepy parents everywhere, he hauled himself out of bed, trudged to the cot, settled his child and then wearily returned. He reached out for his phone and checked the time. Late. Almost early. But maybe it was worth checking something else, he thought. He sat on the side of his bed and looked at the Apple Store’s gaming charts. And there it was. ‘New Star Soccer.’ Number one.

New Star Soccer was an odd game. It occupied a space somewhere between EA Sports’ FIFA games, Sport Interactive’s Football Manager and any number of free-to-play Java mini-games, a sweet spot that nobody in the industry knew existed. Instead of managing or controlling a team, you controlled only yourself. You were thrust into critical moments of your team’s game and challenged to score, or create, the goals that would secure success. Off the pitch, your quest for personal wealth and happiness was an integral part of the game. You could buy property, vehicles, race horses. You could fall in or out of love. It is a ludicrously addictive game and the sales were astonishing. And yet if it hadn’t worked, it might have been Read’s last.

“The games were becoming too ambitious. I was trying to compete with FM and FIFA, these massive brands with databases full of players. I tried to make NSS4 like that, generating players, retiring players, giving them all fluctuating skills. The games was in 3D, but I’d never done that before.”

“I’d had some success with a larger downloadable PC game back in 2006,” Read explains. “New Star Soccer 3 made enough money for me to quit my job. I thought it would keep me going for a couple of years while I made an even better one. I thought the next one would do better, and the one after that and so on. But it didn’t. It got worse and worse.”

Read travelled to Australia with his wife, planning to complete the game down under and then return to reap the rewards.

“We had an amazing time,” he says, “but we came back in enormous debt. Almost £20,000 because I was banking on the success of New Star Soccer 4. The opening month was fine, I made £7,000, but the next month it halved. Then it halved again. I couldn’t repay my debts.”

“I turned my attention to a Grand Prix game, something I’m very proud of even now, but it didn’t do well. I made a stand-alone football game in Sensational Soccer, but that didn’t do well either. At this point, it was quite bleak. I never stopped believing that I could do it, but it was getting stressful and I wasn’t making any money. My wife started telling me that it was time I got a real job.”

Read is a self-taught programmer, turning a hobby into a living after he completed an English Literature degree.

“I started with text-based games,” he told me. “Little management games, trying to create clones of the old Football Manager game on the Spectrum, but I’d never got very far. We had a 50p electricity meter in the house and so you always ran the risk of having the power go out when you hadn’t saved it. I bumped into one of my sister’s old friends the other day and she said, “The one thing I remember about you is when the electricity would go out, you’d start screaming from your bedroom.”

Read’s games have always been quirky, focusing as much on the soap opera around football as on the sport itself.

“I don’t see the point of trying to do something that’s already been done,” he says. “It’s ok when you’re starting out, trying to work out how these things are made, but my inspiration was games like ’Footballer of the Year,’ it was all about being the star. When I first started programming it was around the time that Beckham was becoming a superstar, so it was inspired by him as well. He was turning up to these celebrity events in a sarong, or he’d had a boot chucked at him, so I wanted to incorporate little things like that in the game, random incidents inspired by real life. In doing so, I built up a die hard fan base of the NSS games.”

But after the success of ‘New Star Soccer 3’, Read lost sights of the traits that made his games so popular. 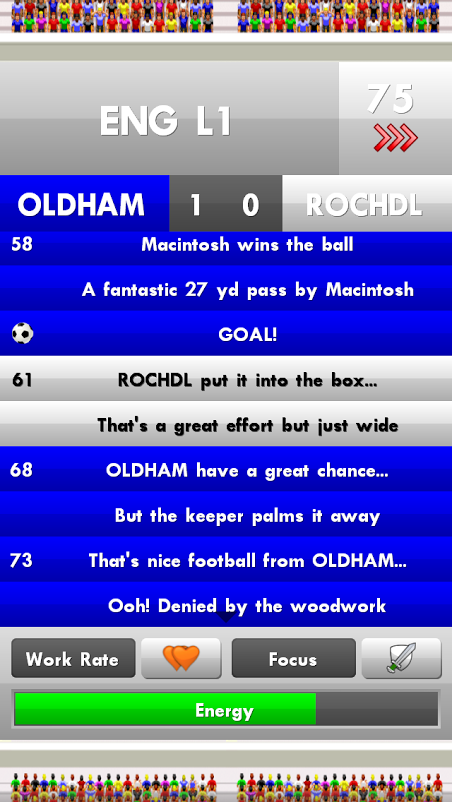 “The games were becoming too ambitious. I was trying to compete with FM and FIFA, these massive brands with databases full of players. I tried to make NSS4 like that, generating players, retiring players, giving them all fluctuating skills. The games was in 3D, but I’d never done that before. It took over two years, it was buggy, it was flawed and looking back now I wonder why I bothered with most of the stuff in there.”

The turning point was the development of the handheld market and the ease of distribution through the App Store.

“I’d always wanted to do a handheld version, but when the iPhone came along it just changed everything; the way games were seen; the way games were released. You could just sign up to the App Store and stick it on. The technology used was very similar to what I’d used in the past so it allowed me to just use a lot of code for NSS4, I just stripped it all back. All that hardship that went into making NSS4, all those harsh lessons learned. In the end, I came out of it with something really valuable.”

“I tried to refocus on the fun aspects of what was great about NSS3. I hate those onscreen joysticks, so I thought, why not make it a simple flick/kick style football game, but as I was doing it, I thought I should bring in the league, the casino, the relationships and it all started to come together. It seemed to work. It’ll be three years since its release in March and it’s still in the top 50.”

“I can’t say who it was, but it was a major approach. We went down the road of them acquiring this game, the lawyers were in, due diligence was done and we were right at the point where we were ready to sign on the dotted line and they pulled out. Some director high above changed his mind. It would have been interesting and the money was incredible, but I’m quite glad in a way. I’ve never worked for anyone else and I’m used to being my own boss.”

“I just love making video games and to be able to do that without any pressure is like a dream come true. I’ve got a lovely family, a nice house and I’m living the dream. That’s all I’ve ever wanted in life.”

In 2015, Read plans to release a new football game and, after promising that we wouldn’t say anything to anyone about it, we were given a sneak preview. We’re now going to break that promise. Read has another number one up his sleeve…