It’s been the busiest six months of Stephanie Roche’s career.

After finishing second to James Rodriguez in FIFA’s Puskas Award last month, she is about to become the first Irish international to play in America’s NWSL (National Women’s Soccer League), signing a two-year contract with Houston Dash.

“It’s a great opportunity for me, and something that I always wanted to do,” she says. “It was a no-brainer, to be honest.”

The Dash are the sister club to Houston Dynamo, coached by Owen Coyle, who also represented Ireland.

“And their part-owner is Oscar de la Hoya!” interjects Roche. “It’s a huge club to go to. It’s an adventure for me, and the club are wanting to do well, so I’m hoping to be part of that.”

It was only six months ago that she signed for ASPTT Albi of the French Division 1 Feminine, scoring twice in 10 league appearances. She’s since admitted that she hadn’t thought through the potential implications of playing in a country where she wasn’t fluent in the language.

So a move to the US is perfect for her: most of the US international squad plays in the domestic league, which kicks off in April. Roche is looking forward to challenging herself against some of the best players in the world as well as taking advantage of the facilities and increased financial investment in the game there.

“I’m happy to be getting over there and facing top calibre players. I’m a footballer, and all footballers want to play at the highest level,” she explains. “It’s a five-month season – I’ll still be home for Christmas, so I won’t even be away for that long.”

Houston Dash are delighted with their new signing. Head coach Randy Waldrum enthused in a statement: “I am so excited about the signing of Stephanie, we are getting a player that has great technical ability, a superb left foot, and possibly the best goalscorer to come out of Ireland since Olivia O’Toole [the legendary striker with 130 caps and 54 goals]. Stephanie will bring a wealth of international experience to our team, and another great attacking option that is different from what we have already.” 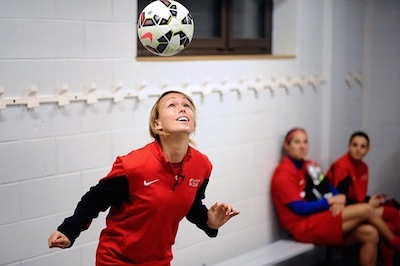 Of course, the Puskas nomination raised her profile immeasurably, and Dash are sure to want to capitalise on that publicity. Her spectacular goal, scored for Peamount United against Wexford Youths in her home country, was watched by millions around the world, and the media interest in Roche was incredible.

“It was a great time for me,” she says. “The coverage I got was a little bit crazy, I didn’t expect to get half as much as I did, but I was really happy.”

But Roche scored that goal months ago – and her domestic and international career is much more impressive than the 15 seconds that were fortunately caught on camera for posterity. Her spell at Peamount coincided with their win of the first Irish Women’s National League championship in 2011-12, and netting 71 goals in her three seasons there, including seven goals in eight Champions League appearances.

“A lot of people think that I just played that one game [for Peamount against Wexford] – but I’ve played football for Ireland for a long time,” she says, with cheery understatement. Indeed, she has represented the Republic of Ireland at under-17 and under-19 level before making her full debut at the age of 19. In the seven years since then, she has picked up 35 caps and scored six goals.

Roche is smart enough to appreciate that her Puskas nomination has given her chances to advance her career that she might not otherwise have had.

“I was lucky enough that goal was caught on camera and I’ve been given this opportunity, so it’s something I want to take with both hands,” she says. “But we’re post-Puskas now – so now I want to go somewhere and prove that I’m more than just that goal.”

Do you have something to say about Stephanie Roche? Have you written about her yourself and would you like to share your work? Write to us here.