Desmond Morris was not a football fan. He was 45 years old when he first went to a match, and only then to satisfy his young son’s pestering.

That first match – a club game in Malta where he lived during the 70s – never reached full-time. It was abandoned amid rioting so bad that the country’s league programme was subsequently suspended. For most, that would have been enough. For Morris it was just the start.

“I thought what on earth happens to unleash such passion and violence in people that are normally quiet and reserved. I have to look into this and find out why grown men weep and roar over a simple ball game,” Morris told The Set Pieces.

The end, which came eight years after that violent initiation, was The Soccer Tribe. First published in 1981, it is a book that makes even – especially – the seasoned observer see the game anew.

Why exactly do players take off their shirt in celebration – an expression of joy unseen outside football, and expressly forbidden by the laws of the game?

Why do some sets of fans twirls scarves while others stretch them aloft?

What makes football hooliganism so much less deadly than clashes that killed 30,000 rival chariot racing fans in Ancient Rome?

Morris, a human behaviourist, went native to answer the questions you never thought of asking. He travelled to hundreds of football matches, but also to its nearest sporting cousins – Gaelic football and Aussie Rules – to understand why one is a global currency and the others are regional small change.

He spent time among the ultras around the world, dodging missiles and eye contact, to work out what drives them. He observed the key players in both the boardroom and the dressing room. He spooled through countless hours of video. And finally he applied the perceptive mind and sharp pen that had dissected human behaviour more generally in his 1967 landmark pop-zoology book The Naked Ape.

“It had to be a balance between coming into it from the outside with a fresh perspective and then getting deep enough to understand,” he told The Set Pieces. “That was made the Soccer Tribe different from other football books.

“It would not have been enough to watch football with a fan. I had to get involved with a club at all levels and see how the institution and its people operated. I was too old to become a footballer so I became a director at Oxford in 1977. I travelled on the coach to matches alongside players.

“I even went on holiday with them during their end-of-season trip so that I could study them as private people as well as public players.”

At the time that The Soccer Tribe first came out, football – sidelined and siloed – was not thought worthy of such attention. It was before Gazza’s tears, before Fever Pitch, before Blair’s head tennis with Keegan, and long before global noodle partners and copyrighted celebrations. A time when football was mad, bad and could be dangerous to be a part of.

In a review of the Soccer Tribe in 1981 author Martin Amis moans that “intellectual football-lovers are a beleaguered crew… regarded as affected, pseudo-proletarian, even faintly homosexual…oh, how we have to cringe and hide!”

Thirty-five years on and Morris has little to cringe or hide about. The Soccer Tribe – re-released on June 6th – has aged remarkably well.

Long before heat maps, Morris dedicated two pages of the book to a graphical representation of a game, turning every touch of the ball during Argentina’s 2-1 win over France at the 1978 World Cup into a type of morse code. 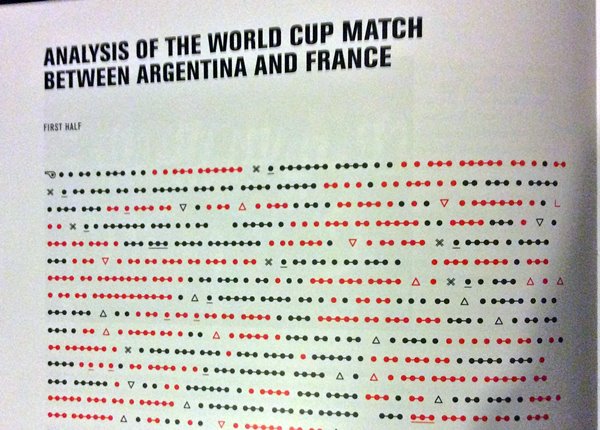 In one throwaway line he questioned the “pseudo-military attitude” behind the number and scheduling of some coaches’ training sessions – an observation that Raymond Verheijen and others have since turned into a philosophy.

He explored the social bonds between players at two different clubs to possess a detailed understanding of team spirit when psychological profiling was still far from the mainstream.

Not everything from the original is retained for this year’s edition though.

One of the illustrations in the 1981 version of the book showed how some fans wore their scarves, for example tied around their wrist or stuffed through a belt loop, to show how willing they were to get fighty for the club’s cause. “We found that was a bit old-fashioned,” Morris reflects, adding that local facets of football freemasonry are now rare in a globalised game.

"The costume language of the soccer fan" from Desmond Morris's The Soccer Tribe: pic.twitter.com/UIyAQjzYey

The new edition of The Soccer Tribe was released in part because of American demand for a handbook on fan culture – a DeBretts for followers of DeAndre Yedlin. The chair-throwing and mockery exchanged by New York Red Bulls and New York City fans – a rivalry of less than four years – suggests some American supporters might be reviving old-school ugliness as a shorthand for authenticity.

Judging by the barrage of bottles that bounced off the Manchester United coach outside Upton Park in May, some fans on this side of the Atlantic are not above bone-headed nostalgia-fests either. Morris acknowledges that ‘retro’ rioting might be a reaction to recent changes.

His book begins with seven theories for how a game should be understood. Of those “the soccer match as big business” and “as a theatrical performance” make more sense of an afternoon at a Premier League petro-dollar stadium than the “stylised battles” or “ritual hunts” that might previously have made the heart beat faster.

@swiftenburg Ah, here it is in my Desmond Morris book, The Soccer Tribe… pic.twitter.com/wDiej3j1Qr

Monitoring crowd noise, Morris notes that chanting has become “less complex and varied since a peak in the 1970s”. Long-time attendees of top-level games have seen those around them change in both social composition and sitting position. But overall, he believes the material improvements in the game – and its eternal essential qualities – are causes for optimism.

“When I wrote the book it was at the height of hooliganism,” he concludes. “A lot of people wanted to go to football but were put off and you couldn’t blame them. I saw some quite ugly scenes originally writing the book.

“It has become more civilised but it has not lost its passion. That actual violence has been channelled – generally – into ritual violence – the jeering, singing, gesticulating.

“That has been enough to attract a new breed of fan. It is now a wider spread of people. That is good for the Tribe and good for the game.”

Return of The Soccer Tribe: in conversation with author Desmond Morris
5 (100%) 7 votes