David Wheeler has unusual priorities for a professional footballer.

On the 27-year-old’s Twitter profile, the first part of his bio reads: ‘Sports Science Graduate at Brunel University’. The second part reveals that he also kicks a ball around for a living at QPR. Having joined Exeter City from non-league at a relatively late age, and then progressing to the Championship with QPR in the summer, Wheeler has a different perspective to most players.

“I can imagine that if you stay in football all the way through from being a kid it is very, very difficult to imagine what it’s like outside of football because you’ve only had that experience. And I consider myself quite lucky to have had the experience of going to university and working, doing other things, because you can build empathy with people from different walks of life,” he says.

“Most of my friends are from outside of the game. I made a lot of friends at uni and kept in contact with people I grew up with, who are doing all sorts of different things from working for think tanks to being doctors. It definitely makes life interesting. It’s nice when you’re outside of football to be with people who don’t really care about football; it’s quite refreshing sometimes.”

Wheeler’s interests certainly diverge from the hobbies most footballers are associated with. During his time at Exeter he wrote a regular column for the Devon Live website, a sideline he has continued with his ‘Wheeler On Wednesday’ feature at QPR.

He subscribes to the New Statesman and is an ambassador for Make Votes Matter (the third part of his Twitter bio), in the campaign to overhaul British democracy and bring proportional representation to the House of Commons.

“It’s something I strongly believe in. It would change politics for the better and make it more inclusive, make it so that everyone’s vote actually counted.” 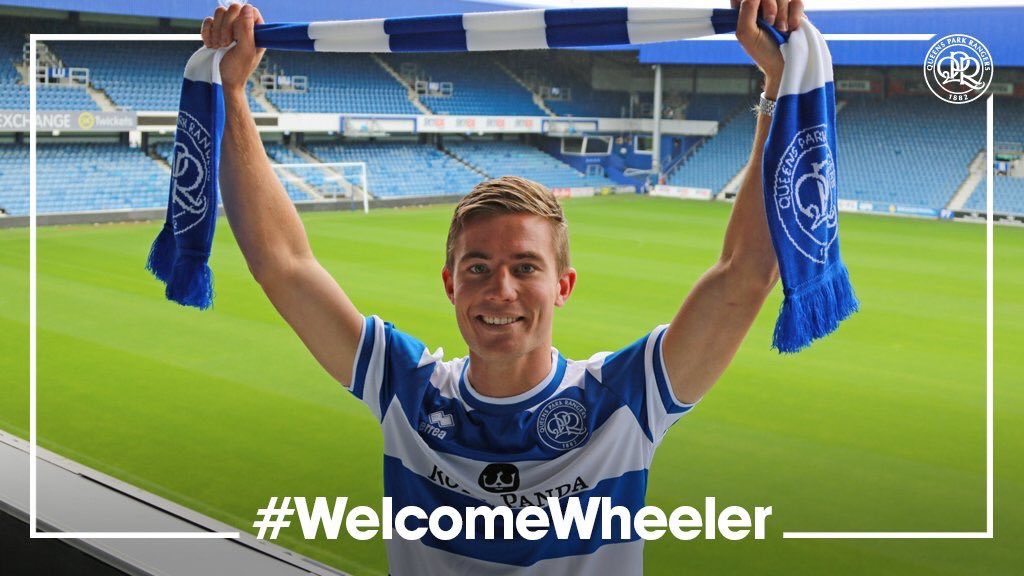 While he was born and raised in a safe seat in Sussex, Wheeler is more than happy to venture outside of his comfort zone. At 16 he had no other choice. Released by Brighton, his chances of making it as a professional drifted. It was time to focus on the real world and studying for a sports science degree at Brunel University.

A daring and diligent winger, and surprisingly strong in the air for 5’11”, Wheeler didn’t let the dream die completely. He played part time for Lewes and then Staines Town, whom he joined to be closer to the Brunel campus, before Exeter City spotted his talent during a trial in 2013.

Wheeler spent four years in Paul Tisdale’s first team, culminating in his best campaign last season when he scored 13 goals en route to Exeter’s appearance in the League Two play-off final. The Grecians were defeated by Blackpool at Wembley, but Wheeler was offered the chance to jump two divisions with QPR in August.

“I certainly felt it was more of a culture shock going from non-league to league football, because training every day was a big thing and you have to have so much care about everything you do. With every pass you make, the decisions you make, a lot more thought has to go into it. The big thing going from League Two to the Championship is that everyone’s an athlete. In the Championship most players are very athletic, very fit, very strong, which is a real challenge.”

It is a challenge Wheeler is adapting to, scoring his first goal for his new club on his first start against Middlesbrough in September and playing an important role in the recent victory over high-flying Sheffield United at Loftus Road. His passion for sports science has been further encouraged by the first-class facilities in his new surroundings.

“It’s incredibly different from where I’ve been. From the amount of physios, to gym instructors, video analysis people. There’s everyone helping you with everything. The data definitely helps your game when you can see it in black and white in front of you. When you can see yourself doing something, or you see the amount of passes you’ve made or the chances you’ve made, it’s something you can’t escape. And that’s good because you want to improve so you need to know where you are.”

Wheeler may be happy with the straight-talking in the stats department but, as he settles into his new environment, he has been cautious about voicing the political opinions he shared readily during his time at Exeter. It hasn’t always been easy given the current climate in Britain and overseas.

“I think [politics] should be relevant to everyone, especially now. The things that are happening now are likely to affect generations to come with the Brexit issue and the way things are going in the US as well. Maybe I’ve kept my cards a bit close to my chest so far at QPR. I haven’t really been as outspoken about things as I was at Exeter, but I was at Exeter for four years so I was very comfortable in my last year or so to talk about politics.

“A lot of the guys [in the dressing room] were interested in what I thought about things, especially about tax; explaining why you pay tax and why I don’t feel upset by paying what looks like a large amount as a professional footballer. You’re contributing that money into a lot of things that are very positive about society.”

Wheeler’s name isn’t likely to crop up in the Paradise Papers any time soon, but he has found that there are plenty of people who don’t share his views. There have been occasions when has been asked to curb his enthusiasm.

“I have landed myself in hot water a couple of times with things I’ve said. Maybe being a bit too explicit with a particular political party that I don’t favour. But I think you learn how to be a bit smarter with that, and a bit cleverer talking about the issues with party allegiances.

“There have been occasions where I’ve been told to rein it in a little bit. [At Exeter] I’d heard there was going to be a banner at the stadium saying ‘refugees welcome’ and I’d stated that I would be in favour of that message – because I am, I think it’s ludicrous that you can blame things on people who have no money – and there were a lot of people who took offence to that, who believe the complete opposite; that it’s the fault of immigrants and refugees for coming to the country and using the resources and taking up jobs.

“I completely disagree with that standpoint. I got into a bit of hot water with that because people were suggesting they might not turn up. So it can go wrong on occasions but I think you can usually reason your way out of it.

“You see it with Gary Lineker. He is quite vocal on Twitter about his political opinions, which he has every right to be, but a lot of people get very angry and upset because he’s not an ‘official’ commentator on politics, he’s a football pundit and he should stick to what he does. But it doesn’t make any sense for him to do that because politics affects everyone in every way and it affects his life as much as anyone else’s really.”

As a club QPR have been at the forefront of initiatives to help the victims of the Grenfell Tower fire, hosting a celebrity fundraising match in September. The tragedy was inextricably linked to political decision-making and, with an inquiry now under way, Wheeler hopes it remains in the public eye.

“I pretty much joined just after it happened,” he recalls. “I’ve spoken a lot about it with other people. [I’m] just disgusted at the circumstances that it happened and just how indicative it was of the culture at the moment, of how the last two or three governments have been. They think it’s more important to save money than look after people’s lives, it’s really quite sickening.”

Is there a need for more compassion in British society?

“It’s not even about that necessarily because I think if you put any person in front of another person who is suffering, unless they’re a sociopath they would want something to happen to make this person’s life better. There are very few people who wouldn’t want that, so it’s something very structurally wrong.

“I think it’s mainly the prevailing economic view that it’s all about profit all the time. There are other theories and other ways of doing things. You don’t always need to cut from the bottom, there are other ways. Taxation even under Thatcher was much, much higher than what it is now. It just goes to show that a lot of it is dogma. It’s not factual.”

Both erudite and eloquent, Wheeler’s outlook perhaps jars with the pigeonhole of professional football. Graeme Le Saux was ridiculed by his own teammates at Chelsea for reading the Guardian and ‘visiting museums in his spare time’, according to the Telegraph, but the piss-taking is less malicious these days even if it still exists.

While Wheeler’s white Converse may justify a ribbing, his passion for politics is a serious business. It may one day lead into a career and require an update to his Twitter bio. But for now QPR are the main focus as he bids to build on a steady start at Loftus Road and command a regular place in the first XI.