Sixteen years on from Brazil’s last World Cup triumph, Lucio is the last man standing. The defender is the sole survivor of the Selecao squad that conquered the planet for a fifth time, the only one still lacing up his boots every weekend.

Many of his companions from that glorious night in Yokohama can be seen proffering their opinions on Brazilian TV’s endless football debate programmes, while others have moved into roles as club directors and a couple have plucked up the courage to step into the dugout.

Goalkeeper Marcos has even started his own beer brand and Ronaldinho recently revealed his intention to run as a candidate for the far-right Brazilian Republican Party in October’s elections. 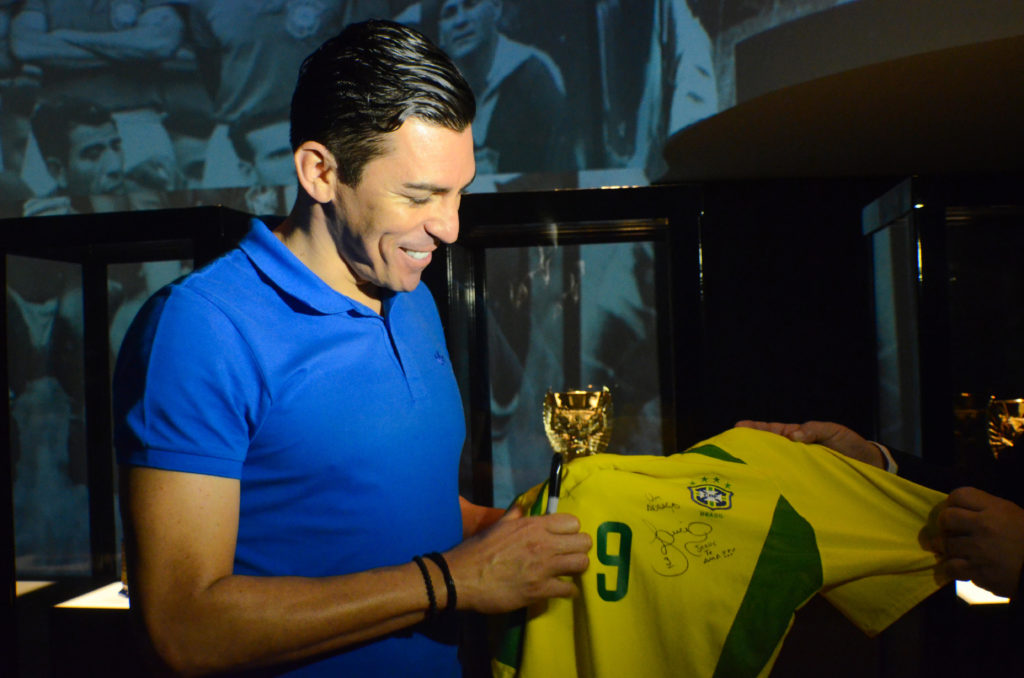 Meanwhile, at the start of this year Lúcio could be seen turning out for Sociedade Esportiva do Gama in the Campeonato Brasiliense, the local championship in Brazil’s Federal District.

It’s a far cry from the glamour of the World Cup or Champions League. Since January, Gama’s home games have attracted an average crowd of just 1,692, and some away games have been played with fewer than 100 people in attendance. So why does Lucio, now 40, keep coming back for more?

“What motivates me to keep playing is my love for football, the joy that I can keep training, the motivation of waking up every day in good health,” he says.

“Obviously, I have played for big clubs and won big titles but for me the day-to-day is important, the moment is important. The part of passing on my experience from abroad to the other players, from the times I spent at big clubs and with the Selecao, is fundamental.”

They may sound a little cliched, but those lines are delivered with a heartening sincerity. The centre-back famous for his galloping forward runs is relishing his time back in the city where he was brought up and at a club who acted as an important stepping stone on his way to the top.

“I started off [my career] at Planaltino,” Lucio recalls, “I played the Campeonato Brasiliense in 1996 and from there I was transferred to Gama. Gama didn’t play in the Copa do Brasil the year that I was there, so Guara, the team that would play the Copa do Brasil against Internacional, signed me on loan just for one game.

“We lost 7-0, but the people at Internacional were able to see something good in my football and signed me. I see this as an opportunity that God gave me in my life, in my career. I ended up being able to make the most of that opportunity and experiencing everything I could have dreamt of.”

It was during his time at Internacional, a giant club from Brazil’s southernmost state, that the towering centre-back earned the first of his 105 caps and caught the attention of Europe’s elite. A move to Bayer Leverkusen in 2001 preceded the most dramatic season of his career.

Leverkusen missed out on the Bundesliga title by a point to Borussia Dortmund and reached the finals of the German Cup and the Champions League, losing to Schalke in the former and Real Madrid in the latter.

At the same time, the Selecao were in the midst of their marathon South American World Cup qualifying campaign and were struggling like never before. It was only with a last-day triumph over Venezuela that the men in yellow guaranteed their place in Japan and South Korea.

“In the 2002 season there was the World Cup qualifying, which for us was really difficult. Without doubt it was tiring as well, having the qualifiers in Brazil and then going back to Europe to play in all the domestic competitions and the Champions League. It was tough.

“As we had a difficult qualifying campaign there wasn’t much confidence,” he continues. “The fans still didn’t put a lot of faith in the Selecao. Of course it’s understandable, because of the irregular qualifiers that we had played. There was a bit of distrust.”

Despite their players’ draining domestic seasons, Brazil arrived in the Far East in the best physical condition of any team at the tournament, a fact often overlooked when discussing the outcome of that World Cup.

“The diligence of the players to look after themselves, to prepare themselves [physically] was very important,” Lucio explains.

“That made the difference for us to have success at the World Cup. During the tournament, the team constructed some consistency, all the parts fell into place and we went on winning and gaining confidence, self-esteem and motivation. All this was fundamental for us to get to the final against Germany and win the title.”

Lucio, who was a key part of the side’s three-man defence, explains how manager Luiz Felipe Scolari roused the troops before the showpiece against Germany.

“Felipão, for the final, was motivating the players as always. Not only him, the players were helping to motivate each other – we talked a lot. We said that now we weren’t going to lose. We had got to the final, so we were going to show our true value to the world. It’s a match that the entire planet stops to watch. We were really determined and full of desire.”

Brazil’s passage to the World Cup was much smoother this time around, as Tite’s men topped the South American segment after a scintillating qualifying campaign. In Lucio’s eyes, the hype around the team is merited.

“The Selecao have managed to gain real consistency and form a strong group in the little time that Tite has had in command. He’s managed a huge revolution.”

As for his old position at the heart of the defence, Lúcio believes the coach has excellent options at his disposal.

“The centre-backs who are playing are the ones I would choose as well. Miranda, for his experience and his performances. Marquinhos, there’s Thiago Silva as well. They are both at a big club [PSG] that is always fighting for titles.”