Now there is Football Manager. But in the beginning, there was Football Manager. Programmed at home by Kevin Toms, it was the genre-creating masterpiece of the early 1980s. Three and a half decades later, he tells us why he’s remaking the game as an app. And how he needs your help. 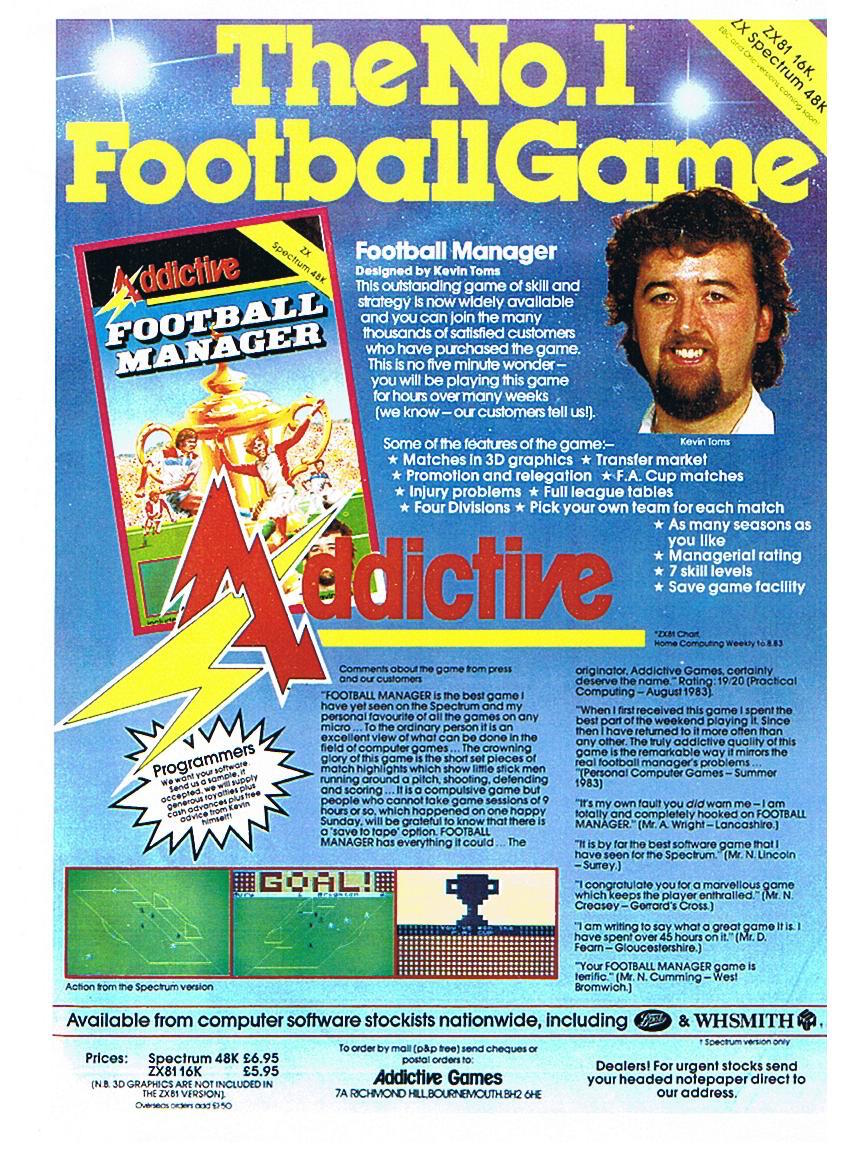 Kevin, you’re the daddy of football manager games, how does that feel?

Well, it’s not something I planned! It happened because I was driven to do it in the first place. I’d been inventing games for quite a while as a hobby, board games and ball games. Then I became a computer programmer and I started to put the two things together.

But the industry was very different in those days, wasn’t it?

Yes, and this is the bit that surprises people; there wasn’t even a shop for computer games. Not one. The only way you could buy computer games was by mail order. You programmed the game and then you took out advertisements. Some games were simply released as pages of code printed out in magazines for you to input yourself. They would publish those listings, often hexadecimal listings, but the print industry wasn’t computerised at the time. It was all done by technicians who had to lay out the print by hand. They were used to putting words and sentences together, not reams of hexcodes. And, of course, they would make mistakes. It was common for these magazines to have to issue apologies the following month explaining that the reason the reader had spent hours entering code only to have the game fail to load was a printing error.

How long did it take to build Football Manager?

It took about a year, I think. Most of 1981. It was launched in January 1982 on the TRS-80 and I was able to do it on the ZX81 as well, but only with the 16k additional RAM pack. It needed that. I did it part-time while I worked as a programmer for the Open University. 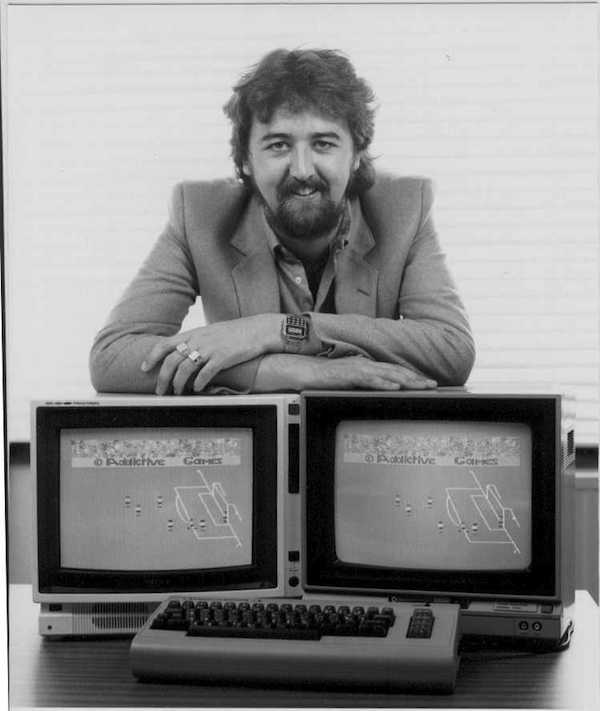 Nowadays, the football management genre is well know, but you were the first to market the concept of, well, pretending to be in charge of a football team. Where did that come from?

I love football. I can watch hours of football, just relaxing and looking at the strategy. I’ve always been like that. I always found it fascinating and that’s why I tried to make it work as a board game, getting the player to win games and climb up the league. But it just wasn’t quite as good as a board game. There were problems in calculating the league table and the fixture list. But when I got hold of a computer I thought, well this could do that.

And while publishers spend millions now in their battle for licensing rights, you were able to use real player names like Eric Gates and Phil Parkes right from the start.

Yes, there were no issues at that time. Nobody was looking at that. The industry that owns the licences had no interest at all in computer games. 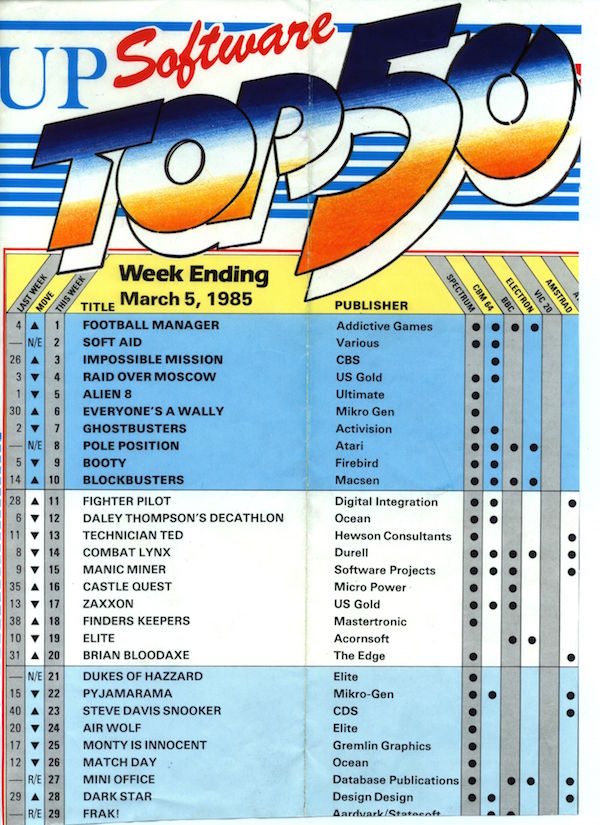 When did you know it was a hit?

There were lots of little moments, but ultimately I knew it was doing well because it lasted. It wasn’t a fashion game that came in and went out after a couple of months. It continued to be successful for a number of years. But the day that WHSmiths placed an order for a couple of thousand copies was a mindblowing moment. At that time, I was still working in a full time job and manufacturing the game in a back bedroom.

How did you physically manufacture the games?

On a cassette recorder.

So every time someone ordered, you had to get a cassette out and record them a copy of the game?

Yeah! I had a production line running. I was in a one bedroom flat, the tape recorder was in the bedroom and it made a noise, if you can recall that noise. (ED’S NOTE: Imagine a fax machine having a particularly intense and prolonged orgasm) I think it took about fifteen minutes to record the game and I would just put them on in the evening, go and watch TV and then I could hear it when it finished, get up and go and put another one on. That was how it was done, getting up and down every fifteen minutes.

But there was one controversial feature in Football Manager that nearly made me cry when I first discovered it and that was to have the players’ skill levels reset at random at the end of the season.

Ah, yes. I’ve modified that now. You see, I was more concerned about keeping the fun going. If you’d built up a dominant team, I didn’t want you to have no challenge the following season. I set seven skill levels in the game so that people could find the challenge they wanted. It’s funny though. I like a challenge, I like to battle to succeed, but there are some people who just want to keep winning all the time.

And of course, there was a picture of you on the box and you had a big beard. You know, in my school, the game was known as ‘Football Manager by the guy with the beard.’

That beard has its own reputation! I didn’t do it at first. I did it in response to what people were telling me when I met them at microcomputer fairs, when I was explaining the games to them, because you have to remember that this was a very different concept to, say, the space invader games that everyone knew about. And I thought, hang on. Writing these games is not so different to writing music or writing a book and people are actually interested in who the author is. Maybe I should tell them. And I thought the reason that musicians are well known is so that people know when they’ve got something new out. And so I started to associate myself with the game and it got a very good response. I think more people should have done it to be honest. 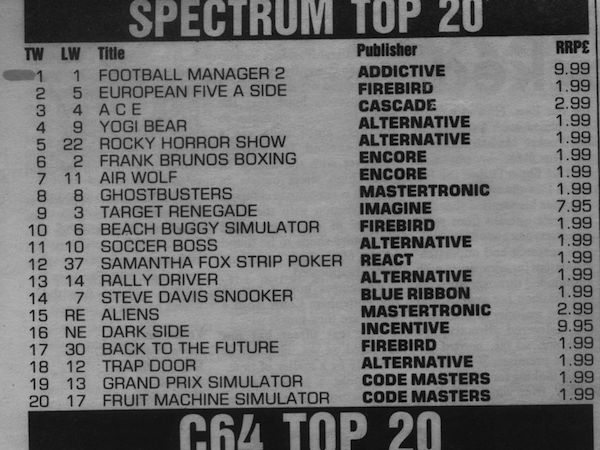 And there was a sequel, Football Manager 2.

Yes, that was done quite a bit later, about 1987. The increased memory gave more scope, but it still had to be available on every format, the 8-bits and the 16-bits. It led to me using a cross development system and a virtual machine so that if I was moving something around on a C64, it would move it on the Atari ST as well. The code could run on everything. But there was a lot of pressure to repeat the success again and the work was hard. That game had to be produced on so many different formats, but it was a success; it was number one for a long time.

Your games led the way for other games like Tracksuit Manager, Football Masters, Championship Manager and of course the modern day behemoth Football Manager. How does it feel to be the father of all of the genre?

Well, I’m very happy about it. It’s nice that people see that Football Manager was the founding game.

Do you play the new games at all?

Not very much, no. I’m back writing again. I find that more fun. And also, I guess, I’m more interested in trying to perfect what I’m doing myself rather than looking elsewhere.

Have you ever played one, seen how enormous they are and thought, bloody hell, what have I started?

I have and I see why people like that, but it’s not what I like. I don’t like to play really complicated games, I never got into the kind of games that you have to spend lots of time learning, and that’s the same for all types of games. I was very happy when the mobile period began with the app stores making it possible for a single person to write a game again. A lot of people remember the old games with great affection because they were so playable. In the 1980s, you didn’t have the big company finance to win a licence  and you couldn’t just win by marketing. At that stage, the games were winning because they were good.

Is that the thinking behind the rebuild of the original Football Manager now?

Now, that’s a really interesting thing. I did the IOS game, Kevin Toms’ Football which took me ages to write and I’m still evolving it now. And then I thought, well how about if I do a rewrite of the original game? And so I put it out there on Facebook and Twitter and said, what do you think? There was a very positive reaction, so I thought, okay, I can do this. I really fancy the idea of taking the original game and rewriting it for the mobile. So we have a kickstarter page up and running and you can keep up to date with all the progress on my blog. 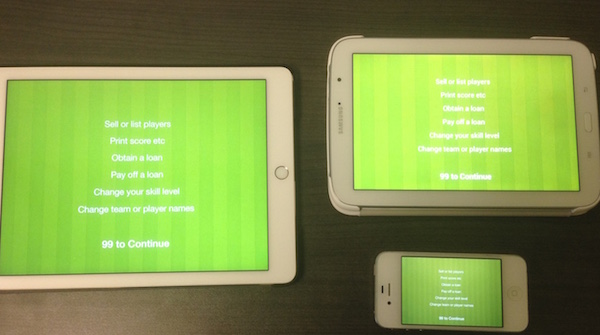 You can support his Football Manager rebuild here