‘Take my picture, or I’ll stab you,’ said an 11 year old ballboy, during a third division clash between Millwall and Hull in 1983. “It was rough back then, there’s no two ways about it.”

Mark Leech, Managing Director of Offside Sports Photography has been a professional photographer for over 40 years. And he’s seen things.

“I mean, there were scenes,” he tells me, “but it was part of the job to capture it. I remember the Scottish final, Celtic vs. Rangers in 1980. I wasn’t ready for that, I thought I’d seen trouble. There were just bodies and bottles and police horses all over the pitch. This one photographer, a guy came at him, grabbed his camera and smacked him over the head with it, and then said ‘that bastard’s got Nikon back to front on his fucking head now.’” 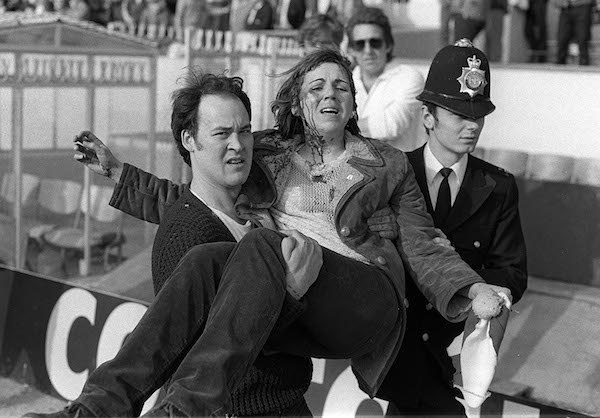 Broadly acknowledged as one of Europe’s leading sports photographers, Leech has been on the touchlines since 1974. You might not know the name, but you will  definitely have seen his work. There isn’t a national newspaper in the UK that hasn’t featured Mark’s photography on their back page.

“I’m happily incognito,” he smiles. “You don’t want the Derby fans thinking you’re a Forest fan because you took that picture of Brian Clough.”

Within the industry Mark’s name carries significant weight. Offside Sports Photography is the leading independent collection of sporting images in the UK and in 2012 Mark was awarded with the title ‘Barclays Photographer of the 20 Seasons’.

After all that time, have modern cameras made the art of photography easier? Responding, Mark suggests that ‘levelling the playing field’ would be a better interpretation.

“Now anyone could have their day, anyone can get the shot. It used to be that you could come home from a game and think that was a 9/10 for me and someone else might’ve had a 2. but now we’ve moved closer to everyone getting a 6 or 7.”

“I remember I came running back from Arsenal against Aston Villa in their 1974 FA Cup clash. Villa were in the third division then and I came running in saying ‘I’ve got the goal, I’ve got the goal!’ I can still hear the laughter from the room ringing round when they processed my film. It’s something I couldn’t do if you paid me now. I panned the ball [Mark followed the ball movement with his camera whilst taking the picture. This results in a sharp ball image, but a blurry background. Not what the Newspapers were after]. I’d like to find the negative now, maybe it’s a work of art, ‘nobody else shoots like this’ I thought. But the laughter and the humiliation… ‘okay, I’ll hold it steady next time’. Lesson one.” 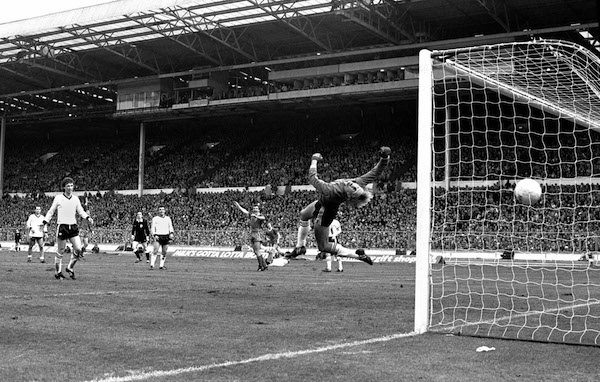 Some people in the industry suggest that photographers of Mark’s pedigree would keep the younger photographers away from his favourite spots at some of the grounds. Was this true?

“I’m not quite that territorial!” he laughs. “I don’t think I carry that weight. Some cheeky little git getting in there is good for the business. I’d say ‘you’re in the professionals area are you, son? Fancy your chances?’ Good on them.”

So, is the technique all about positioning then?

“Everyone tends to go by the corner flag to get the celebrations nowadays. They keep running and running and running, you can’t miss it. But I like to go in tight by the goal, because if someone shoots from around the penalty spot the ball’s coming towards you and you’ve got a few frames to catch it. When the ball’s gone, it’s gone. That’s why you see so many awful pictures in the newspapers with balls moved in photoshop – I saw one recently from a Sheffield United game. That’s something I’ve never done in my life”

With standout shots becoming a rarity in today’s market, the conversation turns to a photograph Leech took of Brian Clough on his last day as Forest manager in 1993.

“At the City Ground, you’re not allowed to work on one side so people were shooting with telephoto lenses the whole game. I thought, ‘it’s okay, but you won’t get the shot’. The whistle went, they went down the tunnel, and Clough came back out, they tried to clear the pitch as he appeared. Fans were grabbing him and photographers were piling in.”

“He’d been drinking quite a bit at the time and one photographer had been doorstepping him so he was trying to take a swing at this guy. You got close to him and he was looking very blotchy, I thought ‘this isn’t the way to remember him’. So, I gambled and climbed up into the stands with all my gear, and got above the players tunnel as they were going back in. Right in front of me were two huge lads and I thought ‘oh well I tried’, but they looked at each other and said “come on, let’s beat the rush and go” and they moved aside. I literally picked up the camera, someone shouted ‘Cloughie!’ there was the City Ground, a sea of fans, the police keeping everyone back, all the drama, and there’s the unmistakable man in the green sweatshirt looking up.” 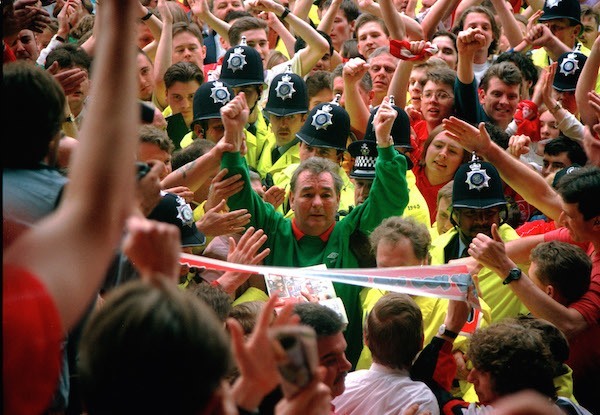 Though most photographs will revolve around the on-field action, Leech has also developed a knack of capturing the off-field occurrences. Though they might not have the same immediate commercial value, their artistic (and in some cases comedic) value is without question.

“I remember going to Hull recently and there were black and gold balloons floating over the pitch. So I took some pictures before the start of the game – then a guy from the Sunday Times phoned up and went ‘any chance any of you lot got the winning goal today?’ I said ‘I’ve sent you all my stuff already’ and he said ‘hang on a minute, is this you? Balloons?’ Back then, the newspapers would ask me why I was sending them this stuff. Sometimes I’ll take a picture and think ‘this is going to confuse a tabloid’”

“I just think; take what you see. I spent my early years shooting to market forces and when I look back, I think ‘where’s that turnstile shot with the kids paying 60p to get in?’ I didn’t take those as I thought ‘who’d want them?’ I take them now.”

What should aspiring photographers consider when they’re starting out?

“Just be original. I get guys sending folios and they look like they’ve just seen the back of a Sunday newspaper and thought ‘that’s what’s required’. If that’s what they get from their contracted agency, you’ve got to break out, you’ve got to get something that makes people think twice. If you’re mad on football and you think you’ve got a knowledge of the game, then you’ll get good pictures. But do it your way.”