Amid the doom and gloom of their relegation to the Championship in May, a number of Newcastle fans formed a new initiative called the Gallowgate Flags. Setting out to create a vibrant atmosphere at St James’ Park, the group coordinate the flailing of over 500 flags across the Gallowgate End before kick-off. Here, Alex Hurst, who spearheads the organisation and hosts the True Faith podcast, tells us his thoughts on Mike Ashley, Rafa Benitez and the new wave of optimism on Tyneside.

“Gallowgate Flags was a response to the manager and his decision to stay. It’s about what we can do as a city to show him we’re grateful. The atmosphere in the ground improved significantly when Rafa Benitez was appointed. On the podcast, we decided to put a shout-out to the few people who move over to the Strawberry corner in Gallowgate without thinking much on it.

“To my surprise, Michael Martin (True Faith editor) said that people had been in touch asking if anything was to be formalised. So on the back of everyone moving over to the corner, we made a bit of a singing section. Suddenly, we ended with about 500 people involved. We had to ask ourselves “what’s the next logical step to support the team?” After looking online, looking at other teams across Europe, flags were the obvious choice.” 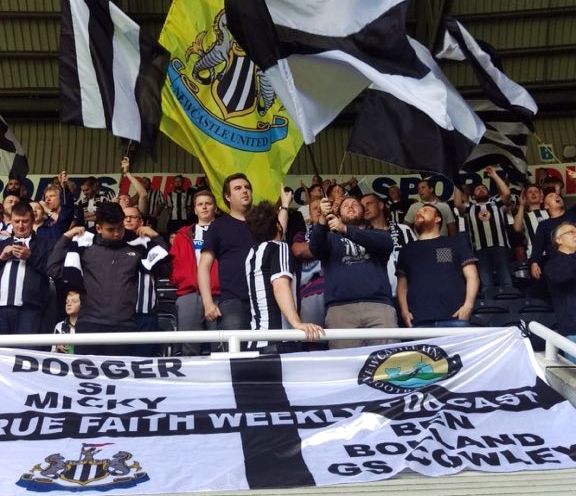 Once you get the manager you want, you get the players you want, it’s our job to make sure the home support is there. If you look at Newcastle’s away form it’s a disgrace. And it has been for the past three years really. The home form, despite all the problems like relegation, is actually very good. You have to put that down to home fans and positivity we can create. Rafa Benitez is very consistent in his message: he wants the fans to be noisy and be supportive. And I think it’s absolutely crucial that we adhere to this.

The initial response went well. We expected to raise between £500 to £1,000. We never dreamed that we would raise up to £7,000 like we have done. This has resulted in 500 flags being made. Just look at the amazing scenes against Huddersfield, it was astounding.

There has also been niggles along the way. Some issues with organisation and distribution but you wouldn’t expect no problems with a club of this size. We’ve had to change some stuff around. For instance, we are not going to leave flags out on the seats before kick-off anymore due to theft. We have to trust people less unfortunately.

Benitez demands success. He wouldn’t be here if he didn’t think he could be successful. Previous managers were here as a stop-gap. They were here because they had nowhere else to go. I don’t think there is anywhere in the Premier League John Carver, Alan Pardew or Steve McClaren would have been given a job until they came here. Rafa had picks all across Europe and for him to come here speaks volumes. I would rather a vision of triumph and winning games than just the manager expecting us not to lose games or just trying to stay in the division. It’s a massive difference.

We still expect promotion. I think there are a lot of fans with memories of Newcastle’s Championship year of 2009/10. It’s a totally different league this time around. This is a much more difficult Championship than the one in several years ago. There is a lot more quality throughout the divisions and a lot of teams expect promotion. But I am still utterly convinced we’ll win the league.

There has been a change and that’s come from the manager. It’s spread throughout the club and even on social media. Newcastle now want to be seen as a positive, friendly, outward-looking organisation compared to the previous institution that treated fans with suspicion. I think they’ve realised they’ve got things wrong and the only way forward is to embrace Rafa’s vision to the fullest.

In terms of Mike Ashley, there won’t be forgiveness for a while. I think if he was to deliver a trophy people would perhaps forget all the negative stuff in fifty years’ time. Whether that be Champions League qualification or a domestic trophy, I feel that would be his legacy despite all the stuff that’s gone on before.

If we don’t win promotion, I don’t think Rafa will stay. Actually, I don’t want to think about it. I am so convinced of promotion it’s almost an unrealistic scenario. It would be a catastrophe. It would mean we would be reliant on Mike Ashley using his own money to keep the club afloat.

With Leicester winning the Premier League last season, I don’t think it’s a ridiculous thing to say that anything can happen in football. Newcastle United are in the top six clubs in England – certainly in terms of support. It’s all well and good the likes of West Ham, Liverpool and Manchester City extending their stadiums, but they can’t even fill it. Newcastle sell 50,000-plus every week. And that’s despite the weeks of mediocrity, despite the lack of success, despite relegation. If this club were to be successful, it could be one of the biggest clubs in England – Champions League and beyond.

With the Gallowgate Flags, just as long as people keep going to watch Newcastle – as long as the manager, team and the club continue to make us feel welcomed – then we’ll be here.