There are some legendary England captains in the National Football Museum’s Hall of Fame: Bobby Moore, Bryan Robson, David Beckham, Tony Adams, Alan Shearer to name but five. This year they’re joined by another – Faye White.

Like Adams, she spent her entire playing career at one club, Arsenal, taking the club captaincy at a very young age – but she also assumed the England armband at the age of 24, holding on to it for the next decade.

Now she will be inducted into the Hall of Fame alongside the likes of Stuart Pearce, Gary Neville, and Paul McGrath to comprise the class of 2015.

“That was a nice email to read!” she says, and then begins to list the number of female players who have preceded her to the honour: “Hope [Powell] and Gill Coultard are in, Pauline Cope – they were the players I’d heard about when I broke into the England team, and they were still playing.”

One might expect it to have come as a little bit of a shock to White that after spending years looking up to trailblazers of the women’s game in England, she is now herself perceived as one of those legendary figures – a role model for young players.

“I’ve got used to it,” she says, with impressive understatement. “I enjoyed that role; that was what I wanted to push when I was captain of Arsenal and England. When I first started, that was something that needed to happen. There wasn’t that much profile, and girls, if they liked football, like I did when I was younger, they didn’t know where to look.

“So it was a big passion of mine that I would try and be that role model – get out to as many schools and do appearances to help, to meet those girls who want to play football, or who love football That was one thing I always really liked doing, and as captain you get to do it more.

“The girls [playing] now are doing it a lot more, all players are realising they need to connect and be close to the fans. They’re certainly very good at it, giving their time after games, doing interviews, and talking, and signing autographs. But while I was playing, when I was made England captain, that was something that was important to me.”

In the past four years, the FA Women’s Super League has encouraged players to be as approachable as possible to fans, with clubs appointing a “digital ambassador” to be the focal point of their social media activity. As she acknowledges, White, who had a son in 2012, has been a much less prominent figure as the new generation have stepped up into the media spotlight. 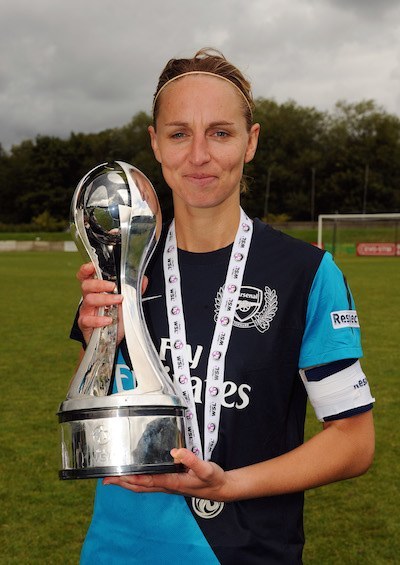 “It’s strange,” she admits. “I’m still involved, working here at Arsenal [in marketing], helping to promote the game differently – I’m not in the limelight as much as the players currently, because I’ve been retired for three years, so it’s a lot quieter on the front of that kind of thing.”

Last week, teenage Arsenal starlet Leah Williamson signed her first senior contract having been with the club since childhood, and White laughs as she recounts: “I said congratulations, and she said it feels like such a long time coming, because she’s been here for ten years already! She’s been doing this since day one and has been able to look up to male and female players in the team that she wants to play for. I trained alongside boys up to the age of 14, and my first experience of playing with a female team was at the age of 14 – hers was under 8! It’s so different, it’s brilliant; it’s good that girls are starting to get into the pathway a lot earlier.”

Then the sheer longevity of White’s career is highlighted once more as she adds: “I told Leah, ‘I’d be more than happy for you to beat my 17 years at one club,’ but that was 17 years in the senior team, so she has 16 years to go!”

White doesn’t get too involved with the first team training any more, although she assisted her colleague Kelly Smith last season when she took on the role of acting player-manager after the departure of Shelley Kerr. She maintains that Arsenal underperformed last season (“we should have won the Continental Cup final – I’m possibly a little bit biased, but we certainly had chances”), but leaving club loyalties to one side, she speaks very highly of the quality of competition in the WSL.

“For everyone outside looking in to women’s football, it’s important they don’t see just one club dominating and being able to attract the best players,” she says. “We want to make sure that doesn’t start to happen again. You don’t want it to go the way the men’s game is going, where money just talks.”

This year the WSL is interrupted for six weeks by the World Cup. England cruised through qualification, but will face much sterner tests in Canada; White is passionate when she talks about the national team’s recent performances under new manager Mark Sampson.

“We need to transition from defence to attack much better, we don’t get enough support to the forwards – and against better teams it’s harder to do that,” she says. “You look around the current team, and he’s lost quite a few big players who have that experience through the spine of his team that knows what it’s like to play in a World Cup. But you need young players who aren’t afraid as well. He’s got a few that are able to do that. Hopefully they’ll do well.”

Then in October, after the close of the WSL season, White and the rest of the Class of 2015 will get their night of celebration as they officially enter the Hall of Fame. And with characteristic captainly level-headedness, White once more downplays it as an award for her own personal achievements, concluding: “It’s nice for the women’s game to be recognised.”