Natasha Dowie is a difficult woman to locate. It’s no wonder when she’s been operating on at least three different timezones over the past month.

The Boston Breakers striker is currently in Australia, spending her second successive off-season in Melbourne, leading the line for Victory in the W-League.

“Melbourne is the most amazing city and I love Victory as a club,” she explains. “Six months is too long for me to not be playing football so I’m following the sun all year around and really enjoying life.”

The W-League is still semi-professional, as opposed to the fully-professional top flights in England and the USA, but Dowie points out that Victory are training four evenings a week this season, which she thinks will improve fitness and spectacle immeasurably.

Dowie signed for the Breakers over the summer, reuniting her with her former Liverpool manager Matt Beard. He had left the English game in the autumn of 2015 to take on his new role in the USA, a country where women’s football is much better embedded in the sporting community; “I feel like I need a new challenge and I feel I have taken the club [Liverpool] as far as I can,” were his official words.

Dowie is sceptical about loyalty in football as a rule, but evidently does feel loyal to Beard, who she describes as a friend.

“Matt has known me since I was 17 years old and has always made me feel like the best striker in the world,” she says. “I think it’s important to have that mutual respect as when you walk onto the pitch you lay everything out there for that person.” 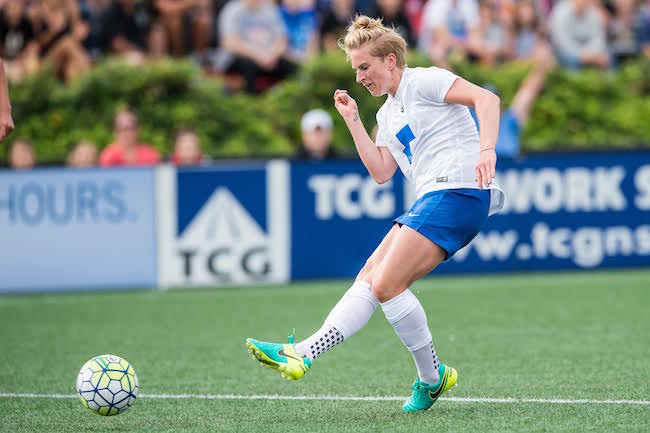 Dowie had left Liverpool shortly after Beard’s departure, signing for Doncaster Rovers Belles on New Year’s Day in a much-trumpeted announcement. Belles are one of the most famous names in the English game due to their illustrious history, but they have suffered in recent years since other clubs switched to full professionalisation as early as possible, benefiting from substantial financial investment and overtaking their more established rivals in the process. She spent just six months at the Keepmoat Stadium, and now will not comment on her time there.

It was a surprising signing at the time, with Belles down the WSL1 pecking order and Dowie a full England international. She progressed through the junior ranks, and although she waited an inordinately long time for her senior debut – caught a fair way down the pecking order in Hope Powell’s regime, behind the likes of Kelly Smith and Ellen White – she started to make a real breakthrough in the 2015 World Cup qualifying campaign.

Powell had gone, and caretaker manager Brent Hills made it obvious that he was picking solely on form – not on reputation. Dowie joined the squad, and got her first senior international goal at Dean Court against Serbia.

When Mark Sampson got the England job permanently, Dowie seemed to drift out of his plans. She is hopeful that she will one day represent the Lionesses again, but is not going to lose sleep if that phone call doesn’t come.

“Mark Sampson has always said that playing abroad will not affect selection,” she says. “Every player wants to play for their country and play in World Cups and major tournaments. I believe I’m still one of the best strikers in England and my stats year after year prove that.

“I am so happy with my life and football that I just try to focus on what I can control and if an England call-up happens in the future then great; if not, I’m always going to believe in my abilities.” 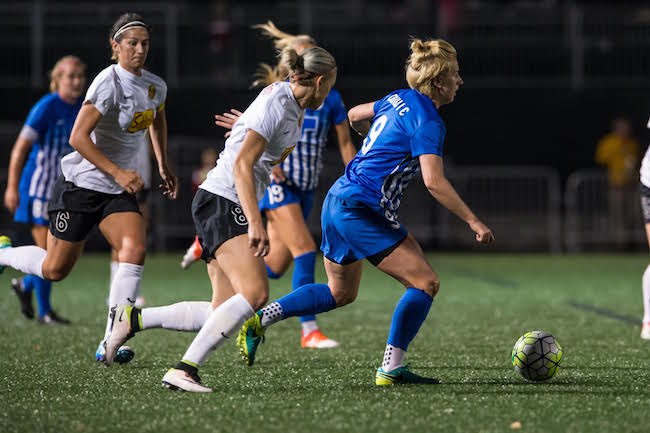 And yes, she is related to Iain – she’s his niece, the daughter of Bob, a centre-half of some non-league repute in the 1980s and 1990s, and then his brother’s director of football at Crystal Palace. Those who watched these hardworking men throughout their playing days might not quite have expected to see the next generation of Dowies in an England shirt.

“I’ve had a great career so far – one that I never imaged I could have,” she admits. “I’ve represented my country at every level, which not many players can say they have done. I’ve won the FA Cup, League Cup and League back to back [in 2013 and 2014 with Liverpool].

“There is still plenty more I want to add to that list but I feel so lucky to have had my family share the journey so far with me. They have been a huge part in making my football career [a dream] come true.”