For some being the only professional British footballer in South America might seem a daunting prospect, but George Saunders isn’t fazed by the challenges of his unusual career path.

“A lot of people are in the comfort zone, but sometimes in life you’ve got to take a risk,” he says. “You never know what’s going to happen. I took a risk coming out to Colombia and now I’m living the dream.”

Saunders is the first Englishman to play in the Colombian top flight since the El Dorado era of the early 1950s, when a FIFA-imposed suspension on the league allowed clubs to sign players without having to pay transfer fees, thus enabling them to offer vastly increased wages.

English trio Neil Franklin, George Mountford and Charlie Mitten were just three of the many renowned footballers to flock to the country – Alfredo Di Stéfano being another – as Colombia briefly became the leading destination for top players.

Franklin lasted only.a handful of games, but Mountford and Mitten, who was part of Sir Matt Busby’s first Manchester United team and earned the nickname ‘The Bogotá Bandit’, stayed for an entire season.

Saunders is now in his fourth year and plays for Envigado, who are currently fourth in the Liga Aguila and tied on points with Atletico Nacional.

“He’s a huge talent,” says Saunders. “Hopefully it will go really well for him in Spain and he can break through at City.”

After joining City in August, Moreno was immediately loaned out to Deportivo La Coruña for the season. It is the sort of circuitous journey that is familiar to Saunders, with the 27-year-old appearing for a host of different clubs in three countries on two continents.

Born in London and raised in Islington as an Arsenal fan, Saunders was invited to join the club’s academy at eight years old. It was the same year his father’s construction job took the rest of the family to Spain.

George remained in England at first, staying with his uncle and training in the youth teams at Arsenal as he lived every young boy’s dream.

“I went to watch them almost every game,” he says of his love affair with the Gunners. “I was lucky to play a few games on the pitch at Highbury. But I missed my mum and dad and brothers and sisters. So one summer I went to Spain and was spotted by Villarreal in a summer camp.”

It was all going well until, in what seemed a decision more consistent with English academies, he was released because of his small build.

Moves to Torre Levante and Espanyol followed, with his two years in Barcelona including a call-up to the Selección Catalunya. It is an experience Saunders is still proud to look back on.

“I think I’m the first ever English footballer to play for the Selección Catalunya. My mum and dad still have the photos.

“I was in the Under-17 side with Bojan Krkic, Thiago Alcantara, Raul Baena, Iago Falque, Victor Ruiz and Jordi Alba. They were brilliant players.”

While that sextet remained on the gilded road to success in Europe, Saunders’ route deviated.

He left Espanyol and joined Segunda side Eldense, before eventually being approached by Leyton Orient.

“I went for a trial and did really well. I thought ‘They’re definitely going to sign me’.

“At the last minute, Russell Slade came up to me and said: ‘You’re more than capable of playing in this league, but with our budget we need someone who has played this level before. It’s difficult for a trialist to come over from Spain and for us to take a bet on them.’

“They didn’t sign me and then the Colombia opportunity came up. I thought, ‘I haven’t got anything to lose’.”

Like many British players who move abroad, Saunders turned rejection into opportunity.

A Colombian friend he had made in Spain was giving business advice to the chairman at América de Cali when the club’s new Brazilian star suffered an injury shortly after signing.

They were in need of a midfielder and Saunders was flown in for a trial.

“I didn’t know anything about them so I looked them up,” he says. “All I looked at was their fans. I saw their amazing videos and massive banners and thought ‘Yeah, I love that’.”

For the first six weeks Saunders waited patiently to be selected. Knowing the language from his time in Spain was a significant advantage, helping him to make friends in the dressing room and understand instructions in training.

He also learned that América de Cali had only recently been cleared from the Clinton List, which had imposed crippling financial sanctions on the club owing to previous connections to the country’s drug cartels.

“It was a bad time money-wise,” he says. “But I can only say good things about the club. They paid on time and I was really happy there.

“It was very different at first, a totally new experience. But I’m the sort of person who can adapt quickly. I’m very chatty and I love a banter with all my teammates, so I settled in really well.”

When his chance finally came, Saunders grabbed it with both hands. He was picked for a cup game and delivered a man-of-the-match performance.

In his second appearance he impressed again, setting up a goal in a crucial league match that earned him a welcome reception from the crowd.

After establishing himself in the first team, everything seemed set for Saunders to sign a new contract at the end of the season. But he was suddenly forced to change his plans.

“The fans in Cali loved me but I had a problem with the trainer so they didn’t renew my contract,” he explains.

“I was suspended for a game one weekend so had a glass of wine with my girlfriend over dinner one night during the week.

“They took it to another level. At that time I was one of the best players in the team and the crowd loved me, but they made a big thing out of it. It was in the papers.

“Really, the Brazilian player who was injured had recovered, and they wanted to put him in the team. But to do that they had to take out a foreigner because you can only have so many in the squad.

“When you want someone out you can make up any excuse.”

Despite the disappointing end to his stay in Cali, Saunders was immediately approached by rival second division club Fortaleza.

It turned out to be a good move and, just four months after beating Fortaleza 3-0 with América, Saunders returned the favour with his new team on the road to promotion.

“It worked out well because I left America and became champion with Fortaleza.

“We played America five times, beat them three times and drew twice. I had a good game every time, which I suppose sort of rubbed it in a bit, but that’s life, that’s football.

“Now I’ve got a good name in Colombia and have been playing in the first division ever since.”

A subsequent move to the coast and Union Magdalena didn’t work out – “I had a really bad time there as I couldn’t handle the heat” – but Saunders is now settled in Medellin with Envigado.

It is the part of Colombia previously home to Pablo Escobar’s notorious drugs cartel, but the city’s bloody history – which has been dramatised in Netflix series Narcos – doesn’t worry Saunders.

“I’ve been up to the favelas here at Christmas, and if you’re with people they know, you won’t have any problems.

“I think anywhere in the world, if you go somewhere you’re not invited, or you go into an area where you shouldn’t be, then you’re going to be in danger.

“Since I’ve been here I’ve been told ‘Wherever you go, make sure you’re in an area with people you know’ and it’s all been okay.

“Out of all the cities I’ve lived in I love Medellin the most. I get a lot of attention but I feel very comfortable here because people are really nice to me and polite.” 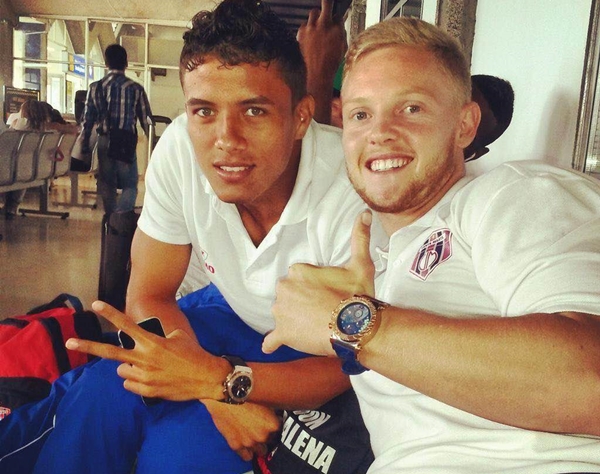 As well as the right city, it seems Saunders has also found the right the club after a career on the move.

He currently plays alongside two former Colombia internationals, and relishes the opportunity to play professionally.

“Here in Envigado we have Andres Orozco and Breiner Castillo, the goalkeeper. They’re veterans now but they played for Colombia and have had a really good living out of the game.

“There are a lot of talented youngsters here but many of them don’t have the opportunities money-wise.

“A lot of them join clubs but then disappear because they come from poor backgrounds and haven’t got the security to be able to carry on playing.”

Saunders’ own journey has finally reached a period of stability in Colombia’s top flight. He lives with his girlfriend in Medellin and sounds content as he talks about his future.

In the background, his friends are cheering on Colombia in their World Cup qualifier against Venezuela.

“We’re just watching the game,” he says. “They’re playing in Barranquilla on the coast and it’s so hot there. I played there at 3pm once and it was a joke.”

Having previously remarked that one of the few things he misses about England is pie and chips, Saunders says he barely even thinks about that anymore.

He has found new comforts in Colombia, with family the only thing on his mind when he thinks of home.

“The only thing I miss is my family. My dad and my mum have been out. My mum was here for my birthday not long ago.”

More than 5,000 miles from London and bridging a 60-year gap in English football exports to Colombia, Saunders is a modern pioneer. But his trailblazing exploits don’t bear a great deal of personal significance.

In reality, he’s just a boy from North London who turned up looking for a game. He now hopes the adventure will continue for many years to come.

“I love everything about Colombia: the weather, the people, the food.

“I’m doing something I’ve always loved. There’s nothing better than waking up and doing what you want to do.

“Sometimes in life your destiny is written and I think I’m supposed to be here.”