“We want to try and create intelligent footballers,” says England Under-20 manager Paul Simpson at the team’s hotel in the centre of Jeonju, South Korea.

“We’re trying to give them that little bit of ownership so that they’re intelligent enough to deal with a game while it’s going on. I think the days of being dictator coaches are gone. We have to get the players to be involved in the process. If they feel as though they’ve played a part in the decisions, they’ll carry them out that little bit clearer.”

Simpson and his squad are here for the Under-20 World Cup, where they are on the verge of reaching the knockout stages after beating Argentina and drawing with Guinea in their first two matches. On Friday evening they face the host nation in what is effectively a play-off for top spot in Group A. “The minute we landed, you could feel the buzz around this World Cup,” Simpson tells The Set Pieces. “Everyone is looking forward to that game against South Korea.”

England’s opening game against Argentina immediately put one of Simpson’s main objectives to the test. He hopes to empower the players to make many of their own decisions on the pitch and adapt accordingly as they sense the way games are playing out. Against Argentina, England had to deal with the South American side dominating possession. They did so admirably, scoring twice before Lautaro Martínez was sent off thanks to video intervention, and then adding a third from the penalty spot in injury time.

It was the young Lions’ first Under-20 World Cup win in 20 years, ending a record 17 matches without a victory. More importantly for Simpson, it was proof that his message is getting across.

Forging a distinctive identity has long been a challenge for England teams, and it is a theme that has resurfaced this summer. What is England’s ethos? How will it help the senior team defeat the likes of Argentina, Germany and Spain when the main events roll around in 2018 and 2022? It is not as simple as picking a style and then trying to play a certain way throughout every age level, an idea that seems increasingly infeasible in the club-dominated modern game. For Simpson, a vital aspect is fusing technical ability with the right attitude to endure the hardships of tournament football.

“When we put squads together at the FA we look at a few different things,” he explains. “The first thing we look at is who are your leaders, who are your match winners. We look at who can turn a game and who can deliver set-plays. We feel we’ve got an experienced, strong, resilient squad here who have experience of winning games at the European Championship with the Under-17s, and want to try and go one step further to build on what they’ve done in the past.”

The next step is to fill in as many of the blank squares on the calendar as possible, to give the players the best chance of forming a tight bond and learning about the different types of opposition they can expect to face. Ahead of the World Cup, the Under-20s took part in a training camp in Japan to acclimatise and “get used to living in each other’s pockets again”.

Last November they played three matches on a tour of South Korea to prepare for this tournament, which optimistically feels like the sort of footnote you might find in a background to how success in 2022 was achieved, similar to the stories of Germany’s foundations in winning the 2014 World Cup.

There is clearly enormous enthusiasm to put a pathway in place for young talent, combined with attention to detail and the level of resources that haven’t always been readily available in previous years.

“You can’t just come up with these ideas and think they’ll happen,” says Simpson. “So there has been a lot of money invested by the FA – first in St George’s Park, getting the facilities right, then with staff, and allowing the development teams to go on the likes of the trip to South Korea last November. The Under-16s have been to Brazil, there’s a group going to Toulon this summer – all of this work has been put in place to try and give the players the best possible experience.”

Cooperation with clubs has also improved. In 2011, I attended the Under-20 World Cup in Colombia and watched an England side deprived of its strongest call-ups fail to score a goal in four matches, drawing 0-0 in each of their group stage fixtures before losing 1-0 to Nigeria in the last 16. It is little surprise that only one of that squad, Jack Butland, has since appeared for the senior side. Only five progressed to the Under-21s, with four now turning out in non-league.

But lessons have been learned. This time around a great deal of hard work has been done behind the scenes to carefully piece together a competitive squad with a core of players that could potentially climb the ladder together for several years.

In Chelsea forward Dominic Solanke, Liverpool’s Sheyi Ojo and Everton duo Ademola Lookman and Dominic Calvert-Lewin, England possess one of the most potent attacks at the tournament. Bournemouth’s Lewis Cook captains the side, with Tottenham sending Josh Onomah and Kyle Walker-Peters, and Arsenal granting the impressive Ainsley Maitland-Niles permission to travel.

“It has worked well,” says Simpson. “This is a great squad of players we’ve been able to bring out. You look at the fact that Eddie Howe has allowed Lewis Cook to come out and join us when Bournemouth’s season was still going, Ronald Koeman has allowed five players to come out from Everton. That’s absolutely brilliant and massive thanks has to go to the clubs.”

As Simpson asserts, there is mutual benefit to the arrangement, with the players gaining invaluable experience that they wouldn’t receive in academies or on the periphery of the first-team picture.

The next test will be how the group reacts to a disappointing setback in the 1-1 draw against Guinea on Tuesday. An own goal from Chelsea’s Fikayo Tomori saw England lose the lead, but the defender regained his composure to deny skilful forward Jules Keita two further opportunities.

It was an occasion when England’s decision-making didn’t pay off, but they can still turn the experience into a positive, as Simpson will no doubt have told them in a prolonged post-match huddle on the pitch. 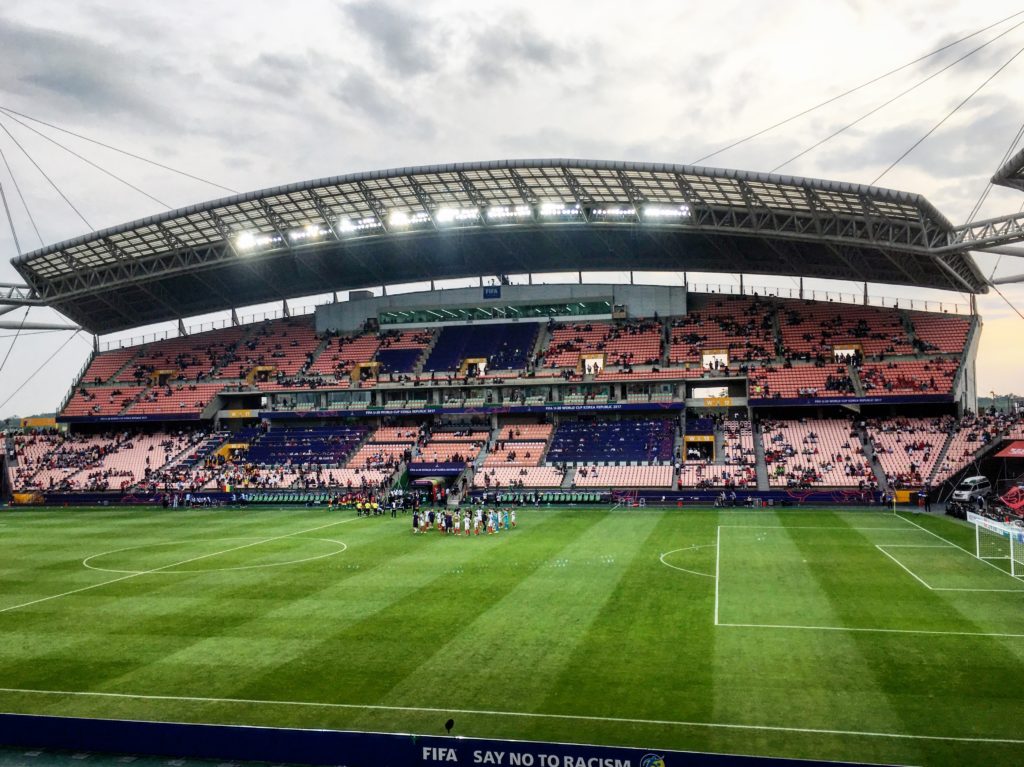 “With it being a World Cup, there are a lot of things that go with it – the extra hype, the extra tension, the pressure,” he adds. “They’ve got to learn how to deal with all those things and I think they’re doing really well. There’s a real togetherness about them. The next challenge is to get out of the group so that these players can experience knockout football at a World Cup finals. And if they can experience that, it will stand them in good stead for when they do progress, whether that’s to the Under-21s or the seniors.

“Ultimately it’s about development. If you ask all these players, it’s not about development – they want to win. But for us as coaches we have to be careful that it doesn’t become solely about winning. We came out of that game against Argentina and the players said it was different to anything they’d ever experienced before. So they’ve now gone through that [and] the next time they do it they’ll know what it’s like. They’ll be able to recall how they’ve dealt with it, how they’ve dealt with the emotions.