When Sebastian Polter scored for Union Berlin in the 85th minute of their game against Kaiserslautern in April, Stadion An der Alten Försterei erupted. With 20,000 Union supporters in attendance, it was the moment the club resurrected their push for promotion to the Bundesliga. As Polter stood arms aloft in front of the Waldseite, the terrace occupied by Union’s Ultras, it was clear how this febrile atmosphere had been a major factor in his decision to return to Berlin following an 18-month spell at QPR.

The energy of that moment helped drive Union forward to score again in a 3-1 victory which put them back in third place, the promotion play-off spot, and three points behind leaders Stuttgart. Defeat to Stuttgart the following week has taken promotion out of their own hands, but 30 minutes after the final whistle in that loss, 5000 travelling supporters called for the team to return to the pitch, not to berate them, but to celebrate their efforts, including a rendition of Always Look on the Bright Side of Life.

Now three points behind second-placed Braunschweig with three matches remaining, “So ‘ne Scheiße, wir steigen auf” (oh shit, we’re going up), is the song on everyone’s mind. Not everyone connected to Union, whose unique identity is not exactly centred around great sporting success, has come to grips with the prospect of playing Bayern Munich and Borussia Dortmund next season. In October, 13,000 Union supporters travelled to Dortmund to see their team lose on penalties in the DFB Cup, but soon they could be facing such illustrious opponents on the same level in the German football pyramid.

For fans like Nils Rusche, a Union season ticket holder, promotion would present the opportunity to “carry our mentality and our values to the Bundesliga”. Union’s ascent has been readily adopted as a feel-good story in stark contrast to the last team from Eastern Germany that won promotion to the Bundesliga, Rasenballsport (RB) Leipzig. In many ways, Union are perceived and positioned as the opposite of the Red Bull franchise, representing what English people in particular think German football is like. But their history has not been one of mainstream popularity. 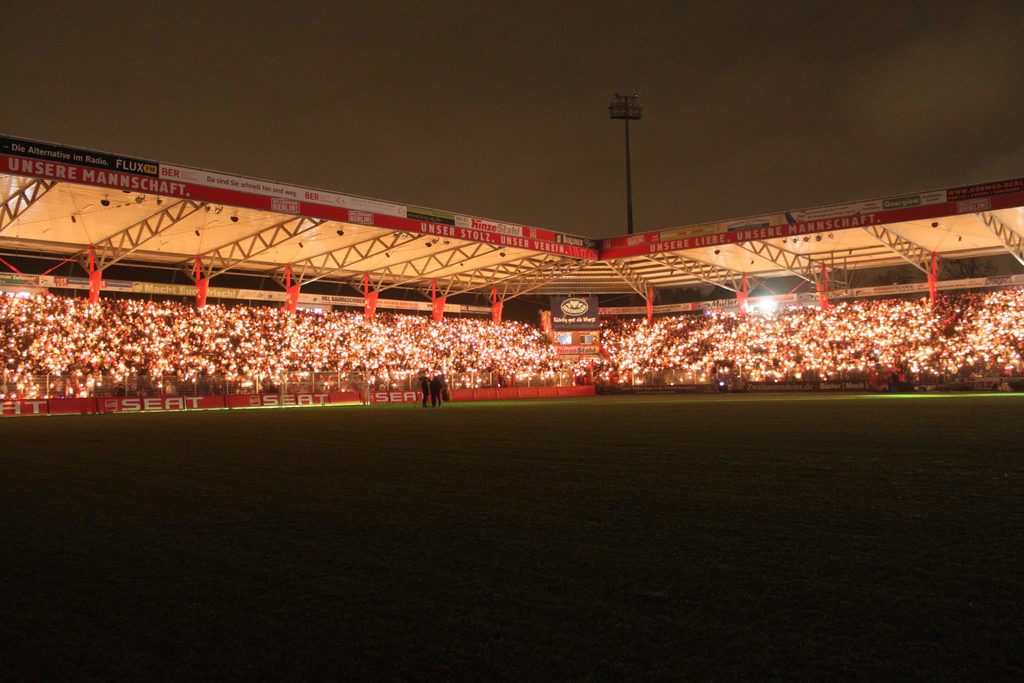 The current season is arguably the most successful in the club’s history, since they were founded in a reorganisation of football in then-East Germany 51 years ago. Union won the cup shortly after in 1968, but clubs like Dresden, Magdeburg and Carl Zeiss Jena benefited from a higher profile in East German football. Not to mention city rivals BFC Dynamo, who were despised for their close ties to the Stasi and won the league for ten consecutive seasons from 1979-88.

After reunification, Union reached the final of the DFB Pokal in 2001. That cup run, which coincided with promotion to the Bundesliga II, came as a huge surprise, and earning the club from Köpenick in south-east Berlin, a place in European competition. They beat Finnish champions FC Haka before losing to Litex Lowetch of Bulgaria, but this success was not enough to stabilise the club. By 2005 they fell into the fourth tier, facing serious financial difficulties along with declining performances on the pitch.

By that stage, Dirk Zingler, a construction entrepreneur, had already taken over as club president. During his tenure, which was recently extended by another four years, Union have found a more secure footing both institutionally and in footballing terms, returning to the Bundesliga II in 2009, finishing comfortably in mid-table ever since.

That comfort has also been criticised. Manager Jens Keller, who joined Union last summer after a mixed spell with Schalke, expressed his astonishment about the club’s perceived lack of ambition, with slow starts in the league and early cup exits both expected and accepted. When Zingler spoke at a festive general members’ meeting to mark Union’s 50th anniversary, he called for more openness and a higher profile as a prerequisite for the club to be successful. “We have to gather those who share our vision of football behind us, to do so, we have to become much more visible,” he said.

There are a number of stories often employed to characterise what, in Zingler’s words, is a “sometimes strenuous but never arbitrary” identity. Supporting Union was a subversive act in the East German state, while more recently, in 2004, fans tried to keep the club afloat in times of financial crisis by donating blood to blood banks and the rewards to the club.

Supporters collectively contributed 140,000 working hours to rebuilding the stadium in 2008-09. Midfielder Benjamin Köhler was given a new contract when he was diagnosed with cancer (an illness he has since recovered from – Köhler returned to the pitch and is still part of the squad, even though he did not play this season due to other injuries). There is also the view that Union insists on a ‘pure’ experience of football, in a stadium with over 18,000 standing capacity and just 3,500 seats.

Those stories are all true, but a club cannot survive on them alone. There is also recognition that Union will need sporting success in order to stay relevant and potentially influence football with its core principles. The official benchmark is to gain a place among the top 20 teams in the country in the next few years. This season offers as good a chance to do that as any. 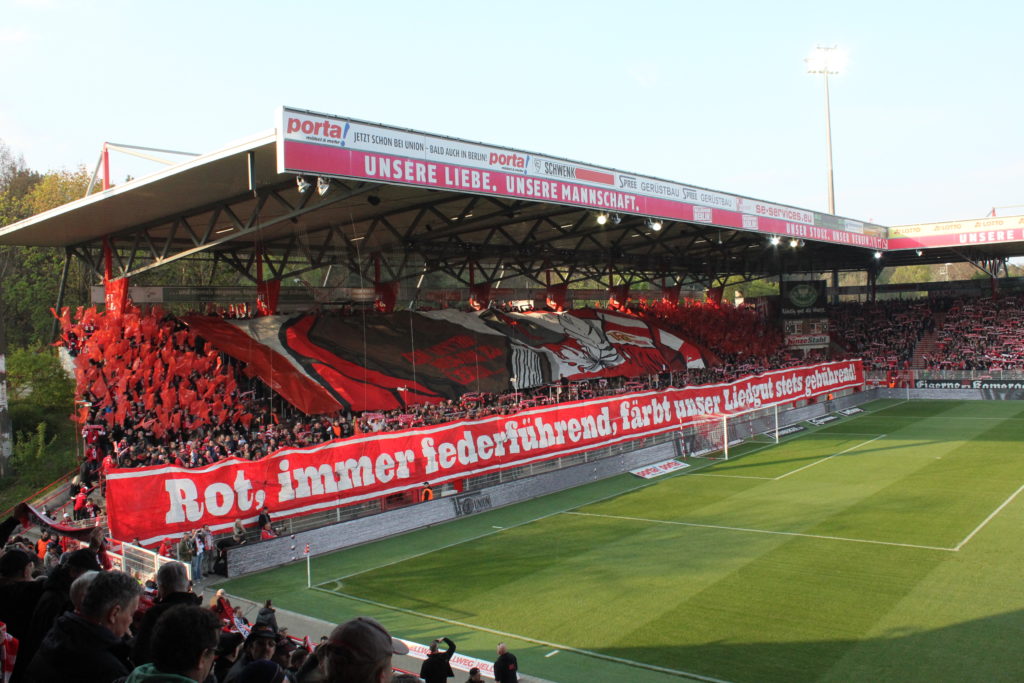 With the economic gap between the first and second division set to increase owing to the newly agreed TV rights deal, reaching the top flight sooner rather than later is imperative. The case of Polter illustrates that pressure. He left the club in 2015 after a year on loan from Mainz, during which he didn’t just become the team’s top scorer, but also formed a bond with supporters that was genuine enough to last until his return from England in this season’s winter transfer window. Polter references the admiration and support he feels at Union at every opportunity, remembering how after his first game, a heavy defeat to Nürnberg, travelling fans “still supported us as if we had won, not lost by 4-0”.

Polter’s transfer, a record for Union at 1.6 million Euros, highlighted their push for promotion. Yet climbing into the Bundesliga would not only boost the club’s resources. It would also provide a larger platform to propagate the Union Berlin message: that football is primarily there for the people who take part in it locally at the game. Anything derived from that experience is, as president Zingler recently said on a podium at Berlin’s Deutsches Theater, secondary.

The second central element in what distinguishes Union from other clubs in Germany and beyond is a steadfast commitment to involving supporters in the club’s evolution. While the ’50+1 rule’ formally demands all professional teams in Germany to maintain a member-controlled majority share, there are many exemptions from that rule, as well as substantial doubts as to whether it could survive a legal challenge and therefore an attempt to enforce it.

Further, many clubs have placed their professional teams outside of the clubs themselves into subsidiary corporations. Union want to be successful in part to show that their model is still functional in these surroundings. And in some sense, adhering to their principles is seen as the only viable choice because, as Zingler says with regard to Union and the wider footballing world: “Denying our origins would be the beginning of the end.” For clubs like Union commercial success and preservation of a unique identity are mutually dependent.

Even though Union are often seen, and position themselves as, a counterpoint to tendencies in modern football, that doesn’t mean their interests necessarily diverge from those around them. Plans to redevelop the stadium illustrate this: new regulations for the minimum required number of seats for stadiums in Germany’s first and second division, as well as a growing fan base, have called for the extension of the current 22,012 capacity necessary.

Those plans will be addressed at the end of the season, and by that stage Union could be a Bundesliga club for the first time. But if that does happen, you can expect the club to stay true to their beliefs. One of the criteria for assessing the stadium redevelopment is whether the club’s special atmosphere can be maintained, along with a continued emphasis on standing terraces. Union like to do things their own way, and the Bundesliga may find that out soon.