It was a freezing March day in Gjilan, eastern Kosovo, when Trepca ‘89 came to the diminutive Agim Ramadani Stadium in the town’s retail district, looking furtively over their shoulders at the relegation zone.

The last time they had been in Gjilan, in late September to play FK Drita, they had taken a 1-1 draw that kept them top of the early season Super League table. But the winter had been a bitter one, and as Kosovo succumbed to the cold so too did Trepca, winning three of their next 14 games and slumping down the table with a deferential compliance. By early spring the dotted line near the foot of the league, that great common denominator at all levels of the game, was just a few defeats from catching them.

That day at the Agim Ramadani, a Brutalist kind of place that is not so much a stadium as two long banks of concrete staring blankly back at each other across a football pitch, it was hard to imagine how the atmosphere could have been made more doleful. Trepca won the game against FK Gjilani 1-0 thanks to an ungainly first-half goal that bounced in off the stricken goalkeeper as he tried to anticipate forward Fiton Hajdari’s low strike.

There were no away fans in the ground, at least none that bothered to register their allegiance in the form of vocal support. The camera operator, sent by the national broadcaster RTV21, erected his tripod maybe 15 feet along from where I was sitting on the bare stone terrace. Over 90 minutes, the feeling drained, first from my extremities, then from my heart. This was top-flight football played without flair, without energy, seemingly without hope.

Kosovo were still outside of the European football family then, though the historic vote that would welcome them into UEFA was only a few weeks away. Nothing was being taken for granted, and the anticipation was muted, largely out of fear that the poll might yet not yield a favourable result. Football in Kosovo still looked and felt very, very amateur.

Skip ahead to June 2017 and, by virtue of winning the Super League in its first UEFA-recognized season, Trepca have become the first Kosovar club to qualify for the Champions League, entering albeit at the first of four preliminary rounds. That process will begin at the end of June, giving the side from the northern province of Mitrovica scarcely the time to catch their breath and reflect on a historic season. But no one is complaining; this is what Trepca wanted. It’s what Kosovo craved.

Winning in Gjilan last March was the springboard for Trepca’s 2016/17 title win. Victory at the Agim Ramadani set them up for just two more defeats in the season’s final 12 games, dragging them up the table into third.

That form has carried them to a first Kosovar championship since their founding in 1989, when football here was still played on marshland and on pain of arrest by Serb militia. It has taken 26 years, since the republic first began operating a parallel state and a parallel football league in 1991, for Kosovo to reach a point where their clubs are accepted into European competition. At Trepca, they feel that honour at fever pitch. It is fitting that they should have won the right to be the country’s first participant in Europe’s top competition.

The Trepca mines in Mitrovica have, since the days of the Roman Empire, been one of Europe’s richest deposits of raw minerals. In the 1920s, the British Selection Trust set up operations here under the trading name Stan Trg, a remarkable piece of classical colonial jingoism, after the original Serbian Stari Trg, meaning literally ‘old town’, was miswritten and no one either in London or in Mitrovica bothered to correct the documents.

The mines took centre stage in the Kosovar liberation movement in February 1989, when the workers there initiated a hunger strike in retaliation to the revocation of Kosovo’s autonomy by the central authorities in Belgrade, sparking protests in Slovenia, Croatia and Serbia. Four months later, the Serb leader Slobodan Milosevic delivered his now-infamous speech at a rally marking the 600th anniversary of the Battle of Kosovo, calling for Kosovar Serbs to rise up against their ethnic Albanian neighbours, and the touch paper for the Yugoslav wars of succession was lit.

Trepca ’89 emerged after the troubles of the late 1980s began to tear Kosovo apart along its multifarious ethnic seams. In what was to become a pattern throughout the following decade, the Albanian contingent splintered away from the pre-existing club bearing Trepca’s name, as Serb-Albanian fractures began to open up across all walks of civic life. Two years later, FC Pristina, traditionally the forerunners of Kosovar football, followed Trepca’s lead, and the Kosovar football league was born.

The battle for ascendency between the cities of Pristina, the capital, and Mitrovica has been a common theme throughout the recent history of football here. In 1977, FK Trepca, with their predominantly Serb line-up, became the first football club from Kosovo to win promotion to the federal Yugoslav First League, two years after FC Pristina had themselves been denied in a play-off semi-final by the Croatian side Osijek.

As Trepca moved into the top flight, their rivals from the capital simultaneously slipped ignominiously into the third tier. Pristina, though, were to have the last laugh, going on to enjoy the golden moment in Kosovo football history during the 1980s with a series of giddy finishes in the Top League, whilst FK Trepca receded back into the second tier after a single season.

Now, again, it is Mitrovica’s turn to hold the bragging rights, albeit this is not the same Trepca that briefly flew the Kosovar flag for Yugoslavia in the 1970s. This district is divided, even by the schismatic standards that this unique country has set for itself. 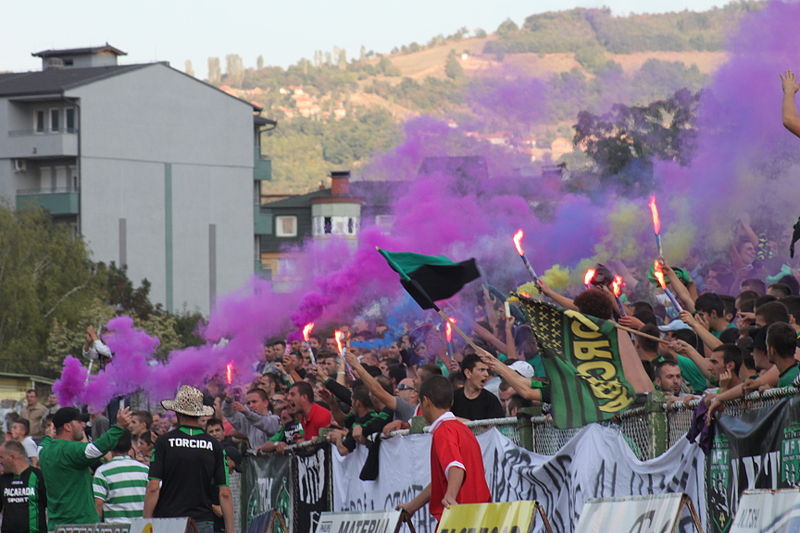 In 2011 an intense stand-off, one of the most intractable since the NATO intervention that brought an end to the war in 1999, developed between the predominantly Serb, semi-autonomous administrative district of North Kosovo and the authorities in the republic, after the latter sought to establish border controls with Serbia in the north without permission of local governors.

By the time the issue was finally resolved in 2013, via intervention from the EU, North Kosovo had secured for its people yet greater autonomy over its public services; perfect for those Serbs who have never felt truly part of an independent Kosovo, but a further wedge driven between two communities which will likely never put the past properly behind them.

That the Trepca squad is made up almost exclusively of Kosovar Albanians has limited the unifying affect of their title victory in the Mitrovica administrative district. This is still the place where diplomatic tensions endemic to Kosovo’s relationship with Serbia are most starkly exhibited on the ground. At least for now people are talking about what is good in Mitrovica, however briefly.

That first Champions League assignment in June should provide short thrift for Trepca. Their challengers will be drawn from the minnow leagues, likely the champions of either Gibraltar, Andorra, San Marino or the Faroe Islands, but there is much work to be done before teams from the Super League can expect to be challenging opponents from the next tier of countries in UEFA’s coefficient table.

Football in Kosovo has been run on an amateur basis for so long, lacking in all but the smallest corporate backing and devoid of professional management, that it will take time for systems to be put in place and for personnel to be made familiar with them. The state of things was borne out most visibly back in October when, with his Pristina team sitting clear at the top of the league, head coach Kushtrim Munishi walked out after a row over what he perceived to be the club’s lack of professionalism.

“I said I wanted to be put on a proper contract, or I would leave”, he told me, days after standing down from the club where he is revered as a legend. “They refused, so I left.”

Days later in Shkoder, Albania, I grabbed five minutes in the car park of the Loro Borici Stadium with Football Federation of Kosovo (FFK) general secretary Eroll Salihu after Kosovo had been thrashed 6-0 by Croatia in World Cup qualifying. I’d met Salihu back in March, the same day that Trepca had won at Gjilani on the eve of the UEFA vote, and had been charmed by his insatiable enthusiasm for what was to come. That spark had been extinguished by Shkoder.

“There are still problems, yes,” he said when I asked about Munishi’s sudden exit from Pristina. Salihu looked and sounded like a man with the world on his shoulders, soaked to the skin in the rain at the Loro Borici.

The Champions League won’t bring a quick fix. There is so much work still to be done to get Kosovo on a level footing with even its immediate neighbours in the former Yugoslavia. But it’s another point on the graph, one more watershed moment in the on-going battle for recognition in the eyes of a world that still has skeptical elements. Trepca at least have earned that.