Joe Cole’s arrival in 2016 brought the Tampa Bay Rowdies into international focus for the first time in decades.

During the 1970s, the Rowdies were one of the most successful and recognisable soccer teams in the United States, but the collapse of the North American Soccer League initiated the club’s downfall.

The original Tampa Bay Rowdies folded in January 1994, shortly after Major League Soccer had been founded and less than six months before the USA World Cup. While the sport was gearing up for its breakthrough moment in the country, the Rowdies quietly slipped out of existence.

In the preceding 24 years, soccer in the USA has steadily grown with MLS becoming an increasingly competitive league. The Rowdies, though, have played no part in the competition since their rebirth eight years ago.

Currently participating in the United Soccer League – a rung below MLS – Tampa Bay Rowdies are intent on returning to the highest level as soon as possible. Coach Stuart Campbell, who enjoyed a career as a midfielder for Leicester, Grimsby and Bristol Rovers, is confident it will happen.

“I really do think the club will become an MLS franchise,” Campbell told The Set Pieces.

“When Bill Edwards (the club’s majority owner) puts his mind to something he usually achieves it. The minute he came into the club he transformed the facilities, transformed the stadium and obviously he is making a big, big push for the MLS.

“I think that with the Rowdies name and brand, we deserve to be in the MLS. Growing up in England, the Rowdies were probably the one US team you knew because of the English players that had come over, so for me it’s one of the most famous football names in America.”

Rodney Marsh was the Tampa Bay Rowdies’ most famous son in the 1970s, establishing himself as a veritable NASL superstar during his first spell with the club between 1976-79.

Brazil’s 1970 World Cup winner Clodoaldo was another to pull on the yellow and green Rowdies shirt in their heyday, while Sam Allardyce can also list them among his former clubs. 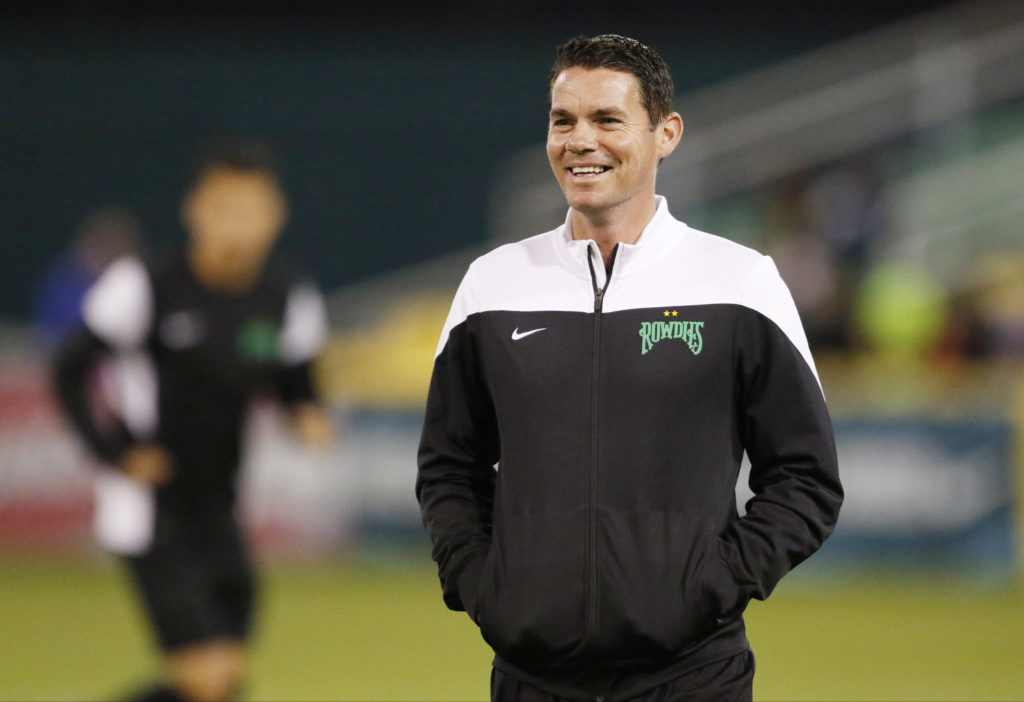 Campbell is confident that Tampa Bay Rowdies will become an MLS franchise.

Campbell finished his career in Florida, spending his final season as a player with the Rowdies before switching his attention to coaching. The former Scotland youth international believes the club’s iconic past helped persuade Cole to make the move just over 18 months ago, and hailed the three-time Premier League winner’s influence on less experienced members of the squad.

“Joe Cole knew about the Rowdies before he came. The owner wanted a marquee signing and we wanted to identify the right kind of character.

“Obviously, if we’re signing a big player, we want them to come over for the right reasons and we spoke to Joe on a couple of occasions and anyone who has spoken to him will know what an excellent professional he is.

“His impact has been huge. He’s a very humble and modest person. He doesn’t go bragging about everything he’s achieved in the game, he just comes in wants to be the best player on the training pitch.

“It’s great for us to have somebody like that and see what he does, not just on the pitch but off the pitch, to make the very best of himself.”

Cole’s career at the highest level was put in jeopardy as a 28-year-old when he suffered a serious knee injury but, now 36, he has enjoyed a new lease of life since his move Stateside.

The former West Ham and Chelsea midfielder is just one of a number of English footballers playing in the US and, while he is coming towards the end of his career, others are just starting out.

Stoke-on-Trent born Jack Harrison made headlines in October when he was called up to the England Under-21 squad despite spending the entirety of his professional career in America with New York City FC, managed by Patrick Vieira. Harrison has flourished into one of the best wingers in the MLS and Campbell believes his progress could lead to other aspiring footballers from the UK soon following suit.

Speaking about the overall development in US soccer, he continued: “I’ve been here since 2012 and the growth of soccer in the US in that time has been phenomenal, not just for the men but for the women as well which is obviously huge out here.

“The tide has slightly turned, gone are the days when the old professionals came over here for one last hurrah. I think the standard and quality of US soccer has improved dramatically over the past couple of years and I can only see that continuing with the level of players coming in.

“I think it suits younger players coming over because, while soccer over here is still underestimated somewhat, there are some really good players to learn from.”

It isn’t just British footballers like Cole and Harrison making an impact in the US. There are plenty of young coaches, including 40-year-old Campbell, carving out a career for themselves in the dugout.

Of the current 23 managers in MLS, three – Carl Robinson, Adrian Heath and Anthony Hudson – are British, while there are eight more in the United Soccer League including Tony Pulis’ son Anthony, who recently took charge of Saint Louis FC.

Campbell was appointed as a coach and an assistant at Tampa Bay Rowdies before being handed the top job on a permanent basis after Thomas Rongen’s dismissal in 2015. He feels there are greater opportunities for young coaches in the US than what they might find back home in England.

“Definitely, there’s more opportunity for young British coaches here, without a shadow of a doubt. In England, there are very few English coaches managing at the highest level and there should be more.

“If you look at some of the successful managers in the Championship; I know Gary Rowett has been linked with Stoke recently but you look at the job he’s done pretty much wherever he’s been whether it’s Burton, Birmingham and now Derby, without question he deserves to be a Premier League manager.

“Even at my old club Bristol Rovers, Darrell Clarke has done a phenomenal job down there and I just hope that British managers get the opportunity to go to the highest level.” 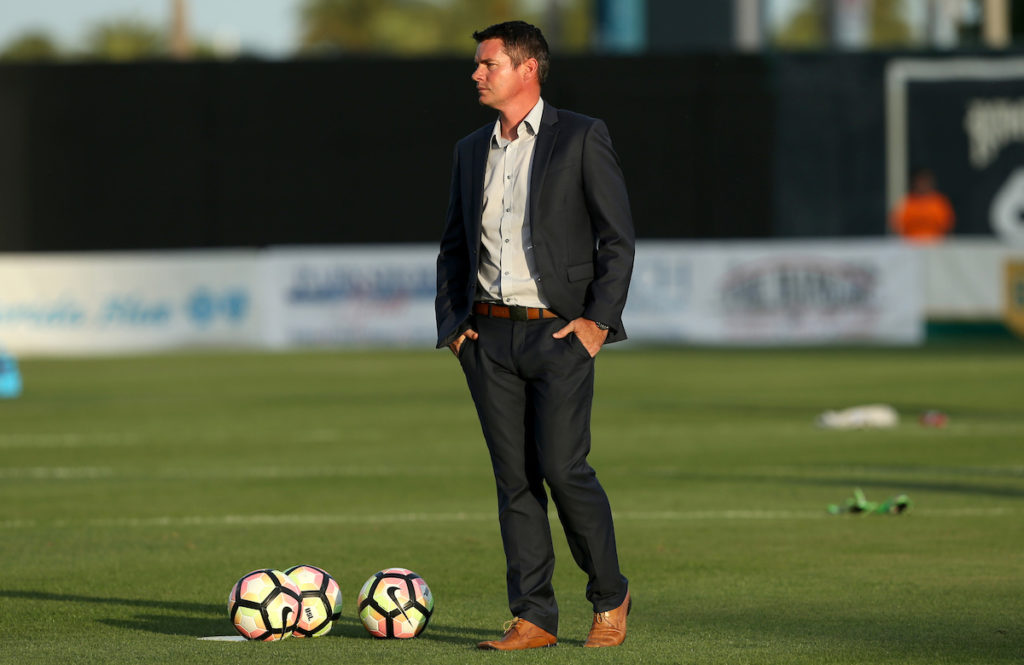 The former Leicester, Grimsby and Bristol Rovers midfielder is happy with life in Florida.

Campbell is a veteran of over 450 Football League appearances having represented Leicester City, Grimsby Town and most notably, Bristol Rovers prior to his move to the Rowdies in 2012.

Six years later, he is still enjoying his life in Florida and is adamant that he sees his future with the club rather than back home in the UK.

“I haven’t given much thought to managing in the UK. Myself and my family are really happy here and love living in the area. The Rowdies have been brilliant not just for me but for my family too so I have no intentions of moving back.”

With the sun shining, the sea on his doorstep and a potential MLS place for the Rowdies in the pipeline, it isn’t hard to see why Campbell isn’t exactly pining for a return home.