Back in April 2009, the Argentina men’s team suffered the worst defeat in their history, losing 6-1 in a World Cup qualifier to Bolivia.

With Carlos Tevez, Angel Di Maria and Lionel Messi among their ranks, Diego Maradona’s side looked certain to win, but they were undone in La Paz at the home of Bolivia’s secret weapon – the Estadio Hernando Siles.

Situated at a dizzying 3,600 metres above sea level, the stadium is among the very highest in professional football and was even briefly banned by FIFA for giving the national team an unfair advantage. During the 2006, 2010 and 2014 World Cup qualifying campaigns, no team claimed an away win against Bolivia.

In June this year, however, 30 players trekked more than 2,000 metres higher than the Estadio Hernando Siles to take part in the highest-altitude match in football history – as verified by Guinness World Records. The players climbed up to a crater atop Mount Kilimanjaro, ankle-deep with volcanic ash, all in the name of tackling discrimination.

Messi may have struggled in La Paz, but the two all-female teams organised by the Equal Playing Field (EPF) initiative were determined to challenge perceptions and make history on the roof of Africa.

Founded and organised by ex-pro Erin Blankenship and football equality advocates Laura Youngson and Maggie Murphy, EPF aims to inspire new generations to continue the battle against discrimination through its various projects. Erin told The Set Pieces why they chose Kilimanjaro for their world-record game.

“Kilimanjaro, for most people we’ve met, has this captivating pull, a mountain that has always been this epic adventure for body and spirit. Practically speaking it was also perhaps the highest point where we could actually fit a FIFA-regulation abiding full-sized pitch on a surface remotely possible to play on – and which fortuitously also has a well-established expedition culture.”

Maggie adds: “In addition, we knew there was a large crater at the top just below the summit, large enough for a football pitch, so we wouldn’t have to send anyone down to pick up a stray ball!” 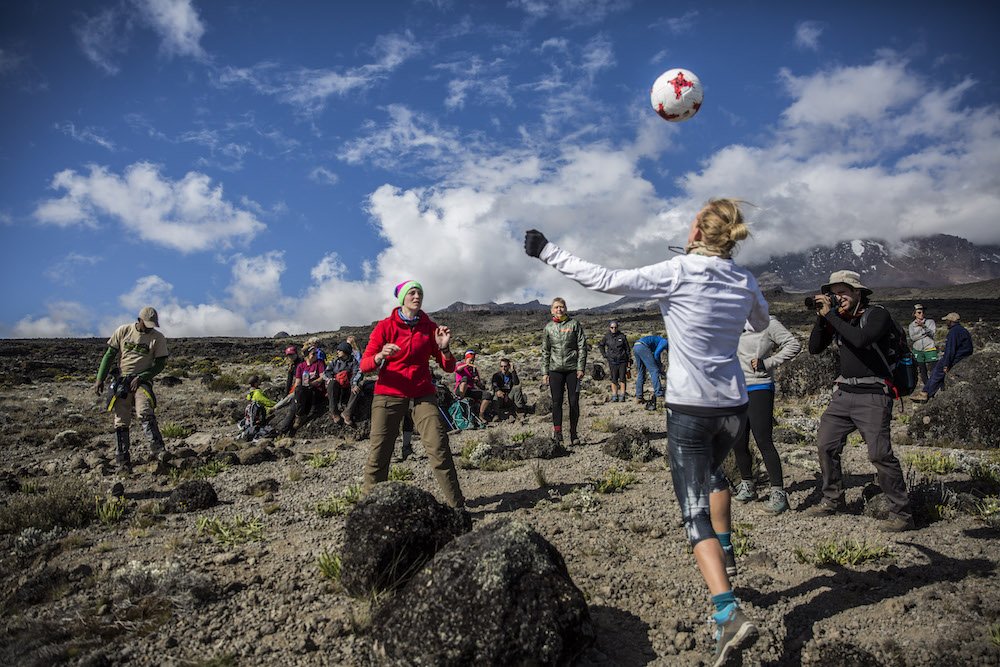 The 90 minute game, between teams dubbed Glacier FC and Volcano FC, featured both professionals and amateurs from over 20 countries aged between 15 and 55. It was officiated by a FIFA referee and played on a pitch marked out with flour.

Among the teams were former Mexico captain Monica Gonzalez, England Hall-of-Famer Rachel Unitt and two-time World Cup Winner and USA star Lori Lindsey. Co-organiser and participant Maggie insists that while the unique match was not easy to organise (or play), persuading some of the game’s biggest talents to join in was the easy part.

“When we spoke to potential players, we said that our call to action was simple: opportunity, equality, respect. Nothing more, nothing less. This resonated with players whether they were in the US or Argentina or Jordan or Tanzania or Nepal.

“I don’t think it’s surprising that many of the players signing up to come were in their thirties. I believe as women we spend a lot of our first three decades simply trying to play, trying to shrug off the challenges and grow a thick skin. It’s only a bit later that you start to digest and understand all the very small challenges as part of a whole; as part of something systematic.”

Erin agrees: “When we said we’re climbing Kilimanjaro to set the world record for the highest game ever played, in order to challenge gender inequality in sport, they tended to say – ‘Yes! How can I be a part of it?’ What was extremely challenging was finding the financial support to fly them there and get them up the mountain, and the logistics of getting them to Tanzania from 20 different countries.”

Once all the players were signed up, the teams were faced with a week of trekking and acclimatisation while lugging all the equipment needed for the game. Far from a gentle warm-up of stretching and shooting drills, matchday started with a brutal five-hour hike, starting at 2am, to reach the playing field situated at 5,729 metres.

“The mountain has a 30% fail rate of those who try to summit every year,” Erin explains. “Kilimanjaro is not really a technical climb; it is an ultra-high altitude hike so the challenge comes from lack of oxygen to your lungs, your blood, and all of the consequences of that.

“The game day summit was one of the hardest physical experiences most of us had ever gone through – five hours, straight up over 1000 metres to nearly 19,000 feet in darkness, ice flurries, water bottles freezing in sub-zero temperatures, unable to rest longer than four minutes at a time due to risk of hypothermia, fatigue from the six days prior, and just the pure lack of oxygen.

“We had been in a ‘deficit’ environment for days – so high that our bodies couldn’t recover even while sleeping because there just wasn’t enough oxygen. Many of us suffered from different levels of altitude sickness and sadly three players were unable to play the final game.”

While the conditions and altitude sickness hit the players hard – even a Tanzanian guide was stretchered down the mountain on day four – Laura says the chest-tightening climb only made the end result more spectacular.

“The game itself was easier than I expected it to be, probably because the climb beforehand was so horrendous. The brutal climb meant that when we reached Stella Point, at the edge of the crater, we could see the pitch and everyone was feeling euphoric.” 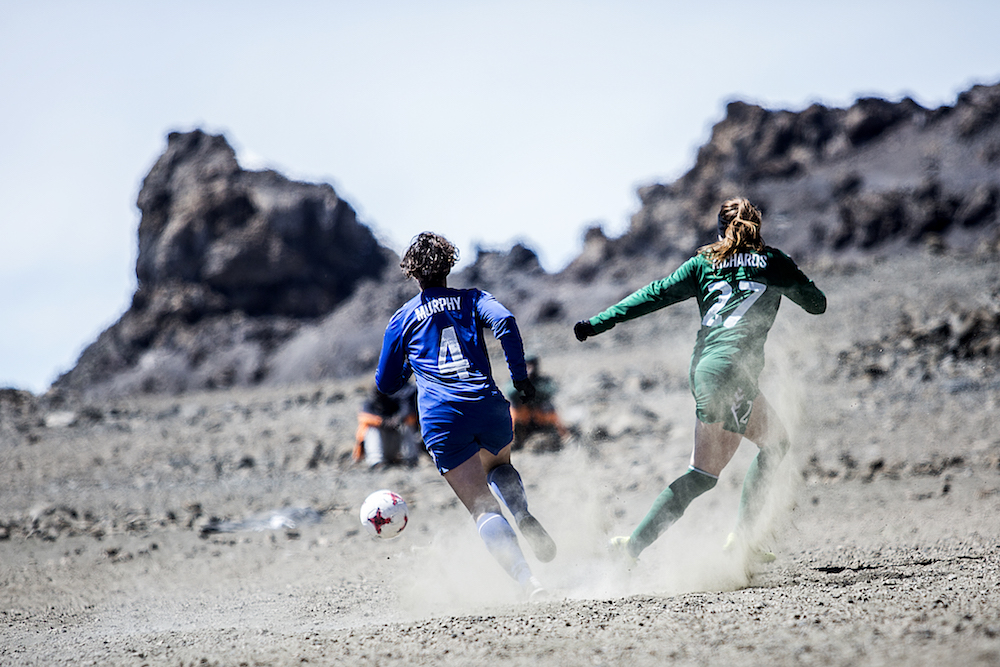 Despite the elation at reaching the destination, Maggie doesn’t quite share Laura’s view regarding the game – with the pitch of ankle-deep volcanic ash and boulders leading to playing conditions that would make even the wettest and windiest of nights away at Stoke seem preferable.

“It was infuriating and at times ridiculous! It was like playing beach football – for ninety minutes, with a gag around your face.

“You would pick out the perfect position of a teammate, your mind would visualise the perfect pass, your brain connected to your body – and your beautiful sweeping cross would stumble in a flurry of volcanic ash and pebble a yard from your foot.”

“The challenge was that my body already felt like it was at its upper limits before the game even started,” Erin adds.

“The sand was much finer [than a beach] so you sank deeper, and it was littered with rocks – so the slide tackles left their marks and passing was interesting. We had two players who had to be carried off the field due to injuries.”

Despite the hardships of playing over 18,000 feet above sea level, the encounter was also going to be competitive, if a little scrappy. While the pitch and altitude took its toll on the players, Laura notes that safety remained critical at all times.

“I hurt my quad on the way up the mountain so I had my leg strapped up for the match. It made running difficult and twisting against the sand. Our doctor from NASA, Dr. Dana, wanted us to do a check-in ten minutes into the match to check that everyone was ok. Especially as a match like this hadn’t happened before, so we made sure safety of the players was paramount.

“After the ten minutes, the match really stepped up a gear. Everyone realised they could play a decent game and it became really competitive. We were also participating in a women’s sport study and taking GPS measurements of the players, which had some fascinating data and results.”

Despite chances at both ends, the game finished 0-0, with the highest-altitude pitch in the world yet to see a goal. But far from a drab stalemate, Kilimanjaro at least saw some high drama in lieu of goals to breathlessly cheer – with Maggie picking out Monica Gonzalez and both goalkeepers as the game’s top performers.

“She played up front with me that day and I think I fed off her energy, she was phenomenal. We also had two fantastic goalkeepers. Perhaps if Megan [Kinneman] and Maja [Astrom] weren’t so good, the game would have seen a host of record-setting goals.” 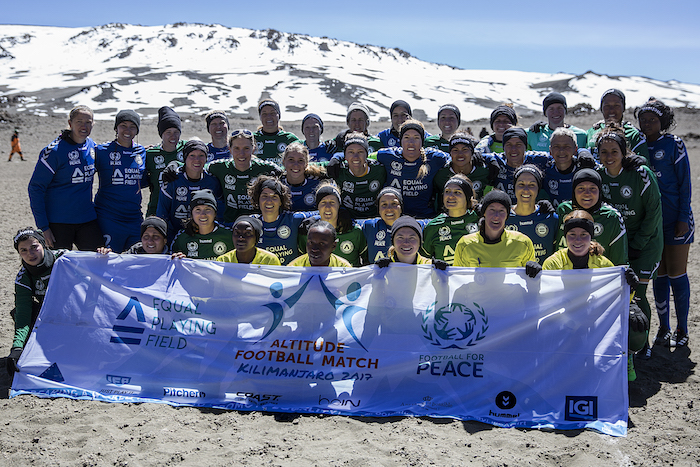 Despite being described as ‘relentless’ by her teammates, Maggie still can’t help but dwell on a wasted one-on-one chance to score the world’s highest-altitude goal.

“I think I literally an out of oxygen and energy for the actual shot having sprinted through. And just with every missed shot of my footballing life, I replayed it in my mind that night and several times since. I know exactly how I would have taken it differently, if I had the chance again!”

Individual goals aside, the event was a huge success for EPF and the record-breaking match forms just the first phase of the initiative’s ‘Altitude Football Project’. Erin explains how they intend to continue to help highlight and fight the discrimination, intimidation, and preclusion of women and girls in sport.

“This is just the start. We want every girl to have the opportunity to play this great game and we are excited about what the Equal Playing Field initiative achieves next. Phase two is to deliver global football and empowerment clinics for girls and women in up to 17 countries. We will also look to do additional challenges and world records to keep up the momentum and continue to draw attention to persistent inequalities for women in sport.

“What’s hard in many ways is to come up with ones that hold the same core characteristics of Kilimanjaro. So far we have talked about an active volcano in South America, Antarctica, the lowest game ever at the Dead Sea, and finally we plan to do a road-trip tour [of games and clinics] ahead of the Women’s World Cup in France in 2019.

“All of this of course requires financing we don’t yet have, but that hasn’t stopped us yet. We’re working on it.”