When the veteran English manager took charge of Chennaiyin in March last year, he hadn’t coached a club in over 30 months. Open-heart surgery had brought a premature end to Gregory’s tenure at Crawley in late 2014. Those health issues and his prolonged absence from management raised concerns, but what bothered Chennaiyin supporters most was the fact he’d accomplished little of note since leaving Aston Villa in 2002.

Gregory introduced local midfielder Bikramjit Singh and AZ Alkmaar academy product Gregory Nelson for the start of the second half against Goa, making wholesale changes to his team’s setup. Ditching a five-man defence, he opted instead for four at the back behind a double pivot in midfield. Chennaiyin duly played more cohesive football in the second period, with Brazilian import Raphael Augusto conducting the orchestra. Although they lost 3-2, there was reason for optimism. 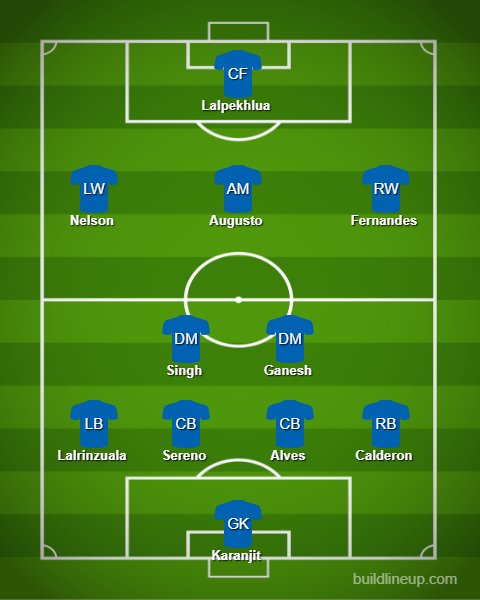 Gregory may not have got off to a winning start, but he did prove he’s a manager with a plan B and an ability to adapt to in-game circumstances. A 3-0 victory over NorthEast United and a 1-0 win at Pune City, who paired 2016 Golden Boot winner Marcelinho and former Liverpool striker Emiliano Alfaro up front, justified his change in approach.

With the aid of their watertight defence, Chennaiyin steadily built momentum and even reached top spot. But a “bad attitude”, as Gregory identified it, soon crept in and a disappointing 3-1 defeat by NorthEast United in mid-January formed part of a poor run which yielded just two wins in seven games. With many of their play-off rivals floundering, though, Chennaiyin regrouped and booked a semi-final spot with a match to spare.

Aside from that sticky patch early in the new year, Chennaiyin were a formidable side for much of the season. After shipping three on the opening day, Gregory’s charges only conceded 19 goals in their remaining 20 games – 17 regular league encounters, plus a two-legged semi-final and a one-off final in the play-offs. Their opponents in the last four were Goa, with Chennaiyin avenging their previous loss with a 4-1 aggregate triumph. They then overcame Bengaluru 3-2 in a pulsating final to seal the championship crown for the second time in their short history.

What made Chennaiyin’s revival under Gregory all the more notable was the speed with which his players adapted to his philosophy. Having previously played a typical Italian style under former manager Marco Materazzi, Chennaiyin – who retained or brought back more players than any other side in the 2017 ISL draft – took little time to transition into a more characteristically English style of football, based on high-tempo counter-attacking and set-piece proficiency.

Gregory’s man-management was even more impressive, with each player fully aware of his role and responsibilities.  Dhanapal Ganesh, for instance, saw his stock skyrocket by heeding his manager’s advice. The midfielder made 33 interceptions, 95 recoveries and won 127 aerial duels, and his performances last term marked a huge step forward for a player who had struggled for game time under Materazzi.

Ganesh wasn’t the only beneficiary of Gregory’s managerial prowess. Indian players Germanpreet Singh, Jerry Lalrinzuala, Bikramjit Singh, Francis Fernandes, Karanjit Singh and Anirudh Thapa have all improved since the 63-year-old was handed the reins, and the club’s fans were delighted to see such a strong homegrown core established at the heart of their team. Chennaiyin fielded 10 Indians in their final league game against Mumbai City – a record in a league which requires clubs to deploy no fewer than six Indian players at any one time. The fact that Gregory almost broke into tears after that match, a 1-0 victory, underlined the bond he’s built with his squad.

Another post-match press conference, this time after the 3-0 defeat of Goa in the second leg of the play-off semi-finals, confirmed that Gregory is having the time of his life in Chennai. “The fact we literally live together under a single roof and see each other in the hotel and training all the time… the togetherness we’ve got and the trust we’ve built [is what makes management in India unique],” he said. “I’ve never known a group like this, who manage, support and look after each other.

“There’s a togetherness you don’t get to see in England. You see the guys for two to three hours of the day, and then they go home. We don’t necessarily sit down and eat together here, but we’re still around each other all the time. We travel together. There’s a real closeness with all my coaching staff and the owners. They come to every game, home and away, and support us – that doesn’t always happen in England. I don’t want to sound corny, but we have a real family atmosphere here.”

A few days after making that comment, Gregory reverted to his favoured starting line-up for the play-off final at Bengaluru’s Sree Kanteerava Stadium. Chennaiyin fell behind but once again demonstrated admirable resilience, bouncing back to score twice via set-pieces before half-time. Gregory’s side then went 3-1 up through Augusto in the 67th minute, which meant Miku’s stoppage-time strike for Bengaluru was nothing more than a consolation.

At the full-time whistle, Gregory looked like he was struggling to comprehend the fact he’d just won the first league title of his managerial career. He later revealed that the achievement didn’t sink in until he saw boisterous Chennaiyin supporters celebrating at the airport the following day.

After lifting the trophy, Gregory told the press it was “enormously satisfying to [win his first league title] in a foreign land”. Despite initial doubts over his credentials, the former Aston Villa, Derby and QPR boss improved every player in his squad; Chennaiyin had 11 different goalscorers and used 25 players in the first team, making this a collective success. The star of the show, though, was Gregory.

Chennaiyin will become the first Super League club to play in the AFC Cup qualifiers – the Asian equivalent of the Europa League – next year, while there have already been discussions with sponsors over the renewal of deals. Gregory is evidently cherishing his time in the country, but he’s keen to take it one season at a time. Perhaps his success with Chennaiyin will inspire other ageing or even up-and-coming European managers to take the plunge in India.

How John Gregory rebuilt his reputation in the Indian Super League
4.6 (92.9%) 31 votes