Should Henry Onyekuru complete his £6.8 million move to Arsenal as expected, he will leave Eupen in the same way he arrived: by scoring goals.

The Nigerian claimed a brace in his last game for the Belgian club, nicknamed the Pandas, in a 3-2 dead rubber defeat against Roeselare. Within the space of three minutes, Onyekuru converted a penalty and guided a fine header into the bottom left corner after out-jumping his marker.

But Onyekuru wasn’t done yet. He soon completed the hat-trick that should have secured him the league’s golden, but the linesman flagged for offside to deny the 19-year-old. His goal tally remained tied at 22 goals with Anderlecht’s Lukasz Teodorczyk, who claimed the award by virtue of scoring more away goals.

Even so, Onyekuru’s last match for Eupen was an exhibition of his goalscoring prowess and all-action displays.

Arsenal have agreed to pay KAS Eupen £6.8m for Henry Onyekuru, per @SkySportsNewsHQ.

No pressure with that name on an Arsenal shirt. pic.twitter.com/DtJfgQ2gTM

The forward is fast, direct and possesses lightning acceleration to beat defenders. Those traits make him a perfect fit for the Premier League. He can be positioned across the front line but prefers to play on the left. There, he has more time on the ball as he tends to drop a bit deeper to be more involved. Onyekuru relishes one-on-one battles and can come inside to play on his stronger right foot.

Although only 5ft 9in, he is tenacious and has a good leap. He can quickly change direction and unsettles defenders with his speed and idiosyncratic dribbling. His movement and positioning are mature, but within striking distance of goal Onyekuru sometimes likes to improvise. He will often try his luck.

His 22 goals were instrumental to Eupen’s survival in their first season in the Belgian Pro League. The little known provincial club was bought by Qatar’s Aspire Zone Foundation in 2012. The Pandas were in financial difficulties and Aspire offered them a lifeline. Andreas Bleicher and Joseph Colomer devised the idea of acquiring Eupen to create a pathway for bringing Aspire’s academy talents into the professional European circuit.

The acquisition was made as part of Aspire Zone’s ‘Football Dreams’ programme, which scouts potential stars in developing African nations as well as Vietnam, Thailand, Guatemala and Paraguay.

Onyekuru is one of the Aspire programme’s success stories. At home in Lagos he didn’t play for a club, but just enjoyed kickabouts on the street. Aged 13, he moved to the Aspire academy in Senegal. He stayed four years in Dakar where he combined his training, predominantly by Spanish coaches, with education. Every year Onyekuru would visit the Qatari capital Doha for a couple of weeks. 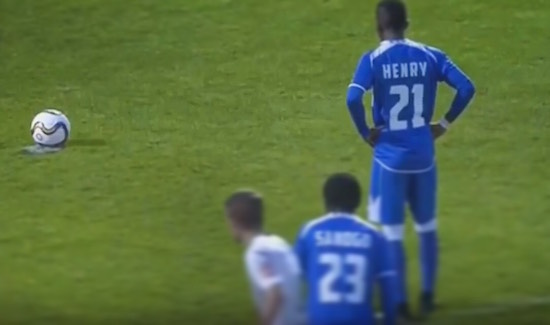 In June 2015 he moved to Eupen, where he was offered a professional contract along with fellow Aspire graduate Eric Ocansey. He scored six goals to help Eupen gain promotion, but this season was his real breakthrough – so much so that Onyekuru wanted to force a move in January, but the club blocked his departure.

Anderlecht and Club Brugge, Belgium’s two most decorated clubs, both wanted to sign the 19-year-old, but his mind was set on moving to England. He flirted with Celtic and rejected both CSKA Moscow and Fenerbahce before Arsenal emerged as the frontrunner to land his signature.

If the move goes through, Onyekuru will be the second player to progress from the Aspire academy to a top European club, following defender Diawandou Diagne who joined Barcelona B from Eupen in 2014.

But like any teenager he is not yet the finished product. He can come across as selfish and somewhat overconfident in his game and, when rushing past an opponent, his decision-making is often too hasty. His defensive game is also underdeveloped.

Nigeria coach Gerard Rorh has rewarded Onyekuru for his prolific season with a first call up to the Super Eagles squad for the forthcoming friendlies against Corsica and Togo. He replaces the unavailable striker Olarenwaju Kayode and joins a roster that includes Manchester City’s Kelechi Iheanacho and Arsenal’s Alex Iwobi.

Should everything go to plan for Onyekuru, he will also be lining up alongside Iwobi for the Gunners next season.