Spencer Prior is a former Premier League defender who played for Norwich, Leicester, and Manchester City, among others. The 45-year-old now manages the Thailand women’s team and has just won the South-East Asian championship – beating Vietnam in the final in a remarkable penalty shootout. Here, he tells Owen Amos about his journey to the other side of the world…

I moved to Australia after retiring from playing in 2007. I needed a change of scenery, a change of lifestyle. Three years earlier, I moved back to Essex to play for Southend. I’m from there but I didn’t want to stay there. I needed something else, something different. We moved to Sydney as a family, even though I didn’t have anything lined up. To be honest, I didn’t know what to expect.

I never thought I’d get a gig just because I played. It embarrasses me that some people think like that. “Oh, he’s a great player, therefore he’ll be a great coach.” Nonsense. I did my UEFA B in the UK through the PFA, but when I moved to Australia, I needed to put in the hard yards.

Some people move here and think every day will be like Home and Away. They live beyond their means. But it’s a challenge at times. You have to work hard to put food on the table. If you’re prepared to do that, you’ll be okay. But you can’t come over and think it’s going to be easy.

There are probably only 20 full-time coaching jobs in Australia. And when I say full-time, I mean jobs you can really live on. So I worked in schools, did community coaching, did a bit of everything. They’re trying to create more coaching jobs, but there are more and more coaches coming through the system. So the salaries are staying flat because everyone wants them.

I did my A Licence in Australia, and got involved with women’s football through that. In 2011 I became assistant to the head coach of the national team, Tom Sermanni (who is Scottish). I hadn’t worked with women much, but the minute I went in I realised they’re just footballers. They want to be coached like footballers and treated like footballers. Your language might be slightly different – you don’t want to swear in front of the girls – but if they’re not doing what you want, you tell them.

While working with Tom I became head coach of the under-20 side, the Young Matildas. We had a number of players who progressed to the senior side. I left in 2013. I didn’t want to because I was close to the players and I still am. But there were politics involved. That’s football.

Before I got the Thailand job, I thought “I’m going to get out of it – re-educate, retrain, do something different.” After leaving the Young Matildas, I spent two years as technical director of the football federation in Tasmania. I then worked in schools and worked for a club in Sydney, but I thought: “I can’t see this growing.” I looked at where football was heading – the growth of analysis, psychology, sports science, things like that. I thought I could retrain and go down that route.

The Thailand offer was a real Sliding Doors moment. Out of the blue, I got a phone call blue from an agent who’d been asked to find a coach in Australia. They wanted someone who had been through the Australian system, and they knew about my work with the Matildas. I signed a one-year contract and started in May. The family are staying in Australia – the wife has a good job and the girls are settled, but I go back whenever I can. At the moment I’m in a shopping centre in Bangkok.

Thailand went to the World Cup in 2015, but then the players had nine months off. There’s no women’s league yet in Thailand, so while everyone else was moving forward, our girls were doing nothing. After nine months you can imagine the condition they were in. I came in May so we had three months to prepare for the AFF Championships (for south-east Asian countries) in Myanmar.

We had two friendlies against China in June and people thought we’d get thrashed. First game, fair enough, we lost 6-0. But second game we only lost 3-0. We smashed it for three weeks to prepare for those games, then afterwards we backed off. If we carried on, there would have been injured players left, right, and centre. I wanted us to peak for the AFF games.

Vietnam had a full-time, year-long programme to get ready for the tournament. We played them in the group stage and, to be fair, they had the better of the game (Thailand lost 2-0). Their movement off the ball was very good. The players’ ability was very very good. People in Australia might question that, because they beat them 9-0 in an Olympic qualifier in March. But I spoke to Australia’s technical director, and he said they’d really evolved. They were very well-organised. 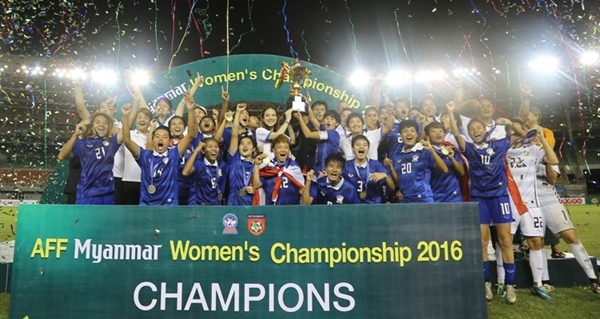 We reached the final and played Vietnam again. I was slightly apprehensive. I like to press high and win the ball, but we tried that in the first game and they caught us out. We changed our formation; pulled our wide players inside. They were still good but didn’t dominate like they did in the group.

We scored early, they equalised late on, and it went to penalties. I didn’t watch them. In 2013, I was the Australia coach when we lost on penalties to Japan in the final of the same tournament. It upset me that we worked so hard and lost that way. So this time round, I spoke to the players before the shootout – got five takers, told them what I thought their keeper would do – then turned away. I walked round and chatted to people. There’s not a lot you can do, is there?

I didn’t see the controversial penalty, but I’ve seen it since. And I certainly saw the debacle afterwards. They needed to score to win the match. They take it, our keeper saves it, and it rolls back towards the goal. At the last second, our keeper dives and kicks it away. The ball must have been an inch from crossing the line, at most. But the linesman was looking right at it. It wasn’t given.

I was surprised by Vietnam’s reaction. It’s fair enough for the players to react, but then you’ve got the coach running three-quarters the length of the pitch to remonstrate with the officials. We ended up winning the shootout, and afterwards it was a nonsense. You can’t not acknowledge the presentation. That’s disrespectful to us and the competition. If I’d been working in Australia, and I’d conducted myself like that, I would have been sacked. It’s as simple as that.

When we came back to Bangkok, there were about 80 journalists waiting for us. It was huge. There is a great football culture here; they are very passionate. There’s money going into the men’s league and they are planning a women’s league. It’s a great vibe. They really want to have a go.

I would never say never to moving back to England. But it’s not something I chase. We’ve got a decent set-up in Sydney and everyone’s happy. The kids have picked up the accent – they’re more Australian than English. The youngest is 12 so she’s spent a lot longer here than in the UK.

I know I’m still in my infancy as a coach. You spend ten years learning, ten years applying that knowledge, and – if you’re lucky – ten years to enjoy it. I’ve just finished my pro diploma, but that doesn’t make me a top coach. I will make mistakes. You never stop learning.

Far-Flung Adventures: Spencer Prior on coaching in Thailand and Australia
5 (100%) 7 votes