“Just like old times,” read one tweet as UK-born USA international Dom Dwyer landed in Florida on Tuesday ahead of his return to Orlando City.

By ‘old’ times it was referring to the striker’s spell in purple during the 2013 season when he scored 15 goals in 13 games on loan from Sporting Kansas City. Back then Orlando were essentially a different club, reforming in 2015 as an MLS expansion franchise. In short, a club that was first established in 2010 now boasts Kaka on its playing staff. History can be fast-tracked in football.

The sight of Orlando supporters cheering Dwyer at the airport was reminiscent of a fan base such as Besiktas, with all their 114-year history, celebrating the arrival of a new hero. But in Orlando’s case, a team that didn’t even exist by the time Besiktas won their 13th Turkish title in 2009, there is a lingering feeling that imitation is the least sincere form of flattery. That it somehow cheapens traditions that began in more organic fashion.

The uneasy truth for some is that the nature of fandom is easily transferable. It is rooted in the human yearning to belong: to a family, to friendships, to a home, to an identity. When the mysteries and enormity of life can render everything so small and insignificant, the only solution is to ascribe personal meaning to it. Following a sports team is one way to achieve that, a niche that lasts a lifetime and provides a structure to shape the past, present and future.

It is a similar idea behind the power of social media, a platform inextricably linked to sport. People want to feel connected, whether to the whole or their own particular clique, and sharing an interest with your peers can gain recognition. Sharing a passion can gain respect.

Orlando City SC fans might be a little excited about the arrival of Dom Dwyer
(?: @OrlandoCitySC) pic.twitter.com/yT3CPNaV2m

For those who have followed their team for as long as they can remember, allegiance bestowed or inflicted upon them from higher in the hereditary chain, scenes such as those at Orlando airport can be perplexing, possibly even galling. But the ingredients for fandom are far fewer, and much easier to find, than many care to believe.

The rivalry at MLS clubs New York Red Bulls and New York City FC provides a compelling example of transplanted fandom. The former was first established as the MetroStars in 1995 before being acquired by the energy drink conglomerate in 2006. The latter was founded by City Football Group in 2013, an organisation so aware of the marketing force of fandom that it now owns three clubs outright and a stake in two others in five countries across the globe.

Compared to teams in Europe and South America, the Red Bulls and NYCFC are relative infants, but on MLS derby day the antagonism between the two sets of supporters is a part of the occasion as much as it is in any historic British rivalry. It may be an entirely manufactured animosity, but at the same time it is absolutely real. Sports teams have long been viewed as a way to let off steam and the New York derby is fertile ground for emotional outburst. 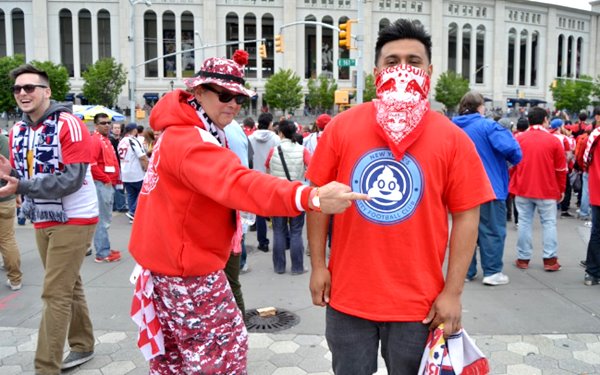 In the past, proximity was always seen as a central factor in supporting a club. But it was the sense of belonging, and the passion that inspires – much more inherent traits – that provided the true sense of kinship.

Proximity is exclusive, and not necessarily something to envy, but belonging is no one’s to own. It is contagious, an endless ripple from the pitch to the stands to the social media accounts around the world. It is what leads local supporters to get season tickets, far-flung followers to wake up in the middle of the night to tune in, and both to buy merchandise.

The yearning to belong, to identify as a part of something bigger, is what drives Premier League pre-season tours in the US, Asia and Australia. If it didn’t exist, nor would the revenue that follows. It dragged those fans to the airport to greet Dwyer, with history providing less meaningful context for Orlando. Proximity didn’t exist until 2010.

In a world more connected than ever before, it may appear that the face of fandom is changing. In truth, the mask has merely slipped.